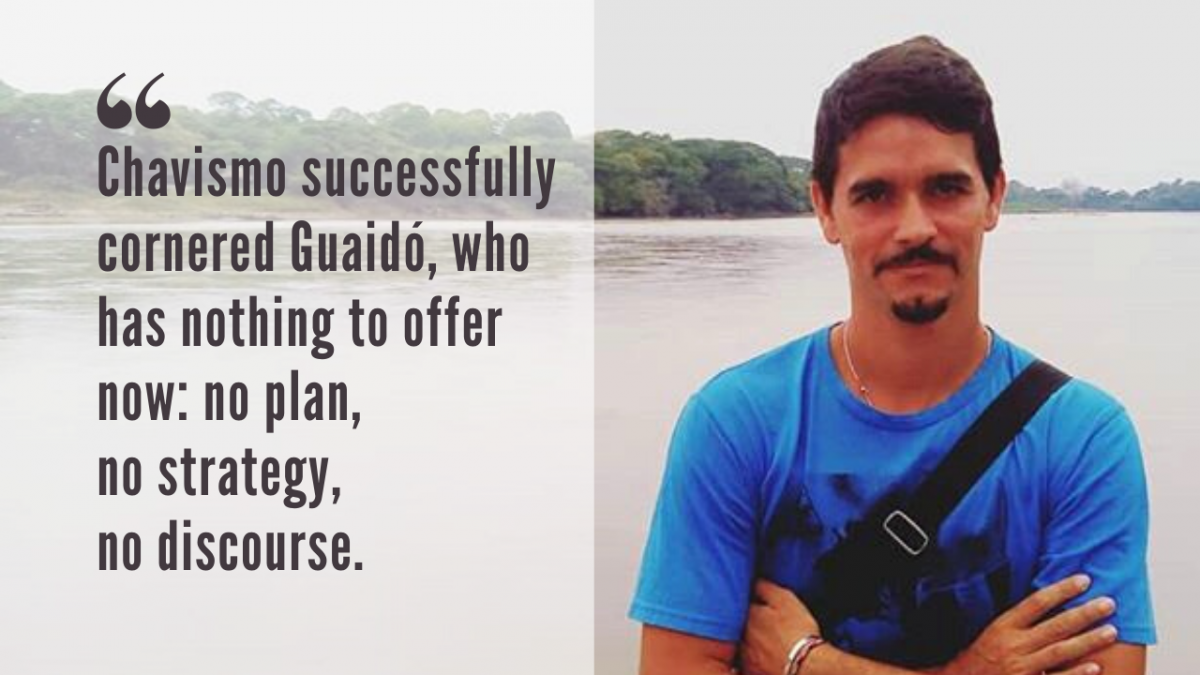 Marco Teruggi is a well-known journalist who writes for Página 12 and is a Caracas-based correspondent for Sputnik and Telesur. Examining both continental geopolitics and the dynamic of regional social movements, Teruggi offers a rich interpretation of Venezuela’s recent electoral process in this exclusive two-part interview.

The relatively high abstention in Venezuela’s parliamentary elections needs examination. A 30.5 percent voter turnout is not so low when compared with that of other legislative elections around the world, but the Bolivarian Process has been characterized by high political engagement and participation. Arguably, there are three factors contributing to an abstention rate of nearly 70 percent: 1) the difficult situation of the Venezuelan people due to the sanctions, 2) pro-US opposition leader Juan Guaidó’s call for abstention, and 3) the deterioration of the political sphere, both for Chavistas and for the opposition. How do you understand this situation?

First, as you point out, we can defend the Bolivarian Process internationally by comparing electoral turnouts around the world. From that perspective, it is true that this election is not a global outlier. And indeed, it is important to highlight this because there is a global campaign to delegitimate Venezuela’s democracy.

Nonetheless, when we analyze the situation from within, we need another interpretation. For Venezuela, a 30.5 percent turnout is low. Here we could make other comparisons, such as the 25 percent turnout in the 2005 parliamentary elections, when the opposition boycotted the process in block. However, the truth is that, during the past seven years, there has been a tendency towards low participation.

Also, a partial analysis could focus on the abstention of an important part of the opposition. However, the Chavista vote also went down: the PSUV-bloc got about 4.2 million votes on Sunday [December 6], about two million less than in the 2018 presidential elections, which were also characterized by low voter turnout.

In other words, the low turnout rates should be cause for concern. Additionally, the opposition sector that ran in the recent National Assembly elections had very poor results: approximately 1.2 million votes.

Hence, Chavismo’s historical core of support has been reduced, but the so-called “democratic opposition” did not succeed in building an atractive political proposal either.

Nonetheless, it would be incorrect to attribute the low turnout to Guaidó’s call to abstain. In other words, Guaidó called on people to boycott the elections, but he was met with social silence.

The problem runs much deeper. To a great degree, what became visible on December 6 was the distancing between a growing sector of society and the different political expressions in the country.

However, there are some evident asymmetries: Chavismo continues to represent, to a great degree, a unitary process, and the PSUV has roots around the country, while the opposition is divided and has no consolidated party structure in the territory.

Of course, all this happened in the midst of a complex economic situation that has been going on for years. First, it was the food shortages, hyperinflation after that; then the loss of monetary base and the lack of paper money, the emergence of the dollar, low wages, the poor state of public services from water and gas to electricity, gasoline shortages, and so on.

Venezuela has been going through an economic crisis that has mutated due to the US sanctions [begun in 2017], which are creating a tremendously difficult situation for the population. In this context, visible politics presents a kind of mirror image: the opposition says that the source of all the problems is to be found in Chávez and Maduro, whereas the government alleges that the sanctions are the root of all problems.

In other words, one sector acts as if the sanctions did not have an impact on the life of the people, while the other sector neglects to recognize that bad administration has had a real impact.

Is that to say that the discourses complement each other and are basically stagnant?

Leading up to the elections, the Chavista discourse went as follows: “With a new National Assembly we will solve our problems,” but the how was not explained. The opposition does not offer a plan either: Guaidó’s only plan is to oust the government, while the “new” opposition, which might have renewed the debate, entered the scene with a vague discourse.

What happened on December 6 is a loud wake-up call, an alarm bell. However, that does not mean that Chavismo’s political power is precarious at the moment.

The key question now is how to properly evaluate victories and defeats.

Considering that Guaido’s opposition’s strategy was to oust Maduro – or “force a governmental change” as the US says diplomatically – they failed once again.

However, for the Venezuelan process of change, there is a pending question. Why did a sector of society lose the expectation that something could change for the better?

With that being so, would you say that there is a sort of collective dissent regarding both official Chavismo and the opposition’s ways of doing politics?

I would say that there has been a process of erosion and that it has as much to do with the economy as with the static character of political discourses. No sector is able to oxygenate or renovate its logic.

The opposition, still mostly organized around Guaidó and the radical sectors, is unable to renovate itself. It repeats the discourse of the national tragedy and continues to deliver the “change of government” message, but it is unable to place hope on the table.

On the other end, the government maintains a discourse that does not succeed at interpelating other social sectors and bringing back people who distanced themselves.

Of course, there is a Chavista historical base that will maintain its support of the government regardless, but the rerun discourse does not seem to speak to the majority.

The government finds itself in a peculiar situation. On the one hand, it is strong and stable in the institutions, but at the same time, its relationship with the pueblo is fragile. Moreover, all this is developing in the context of attempts to isolate Venezuela and the imperialist siege. How would you characterize the current correlation of forces?

Inside the country, the government aims to stay in power, and it is succeeding. For a year and a half or so, the government has been trying to fragment the opposition: it has isolated the most radical sectors and has facilitated the entry of a more democratic opposition into the political scene.

Although it is true that the entrance of the new democratic opposition did not get social support, the chessboard has been rearranged and the Guaidó sector is up against the wall. For example, [self-exiled opposition leader] Leopoldo López’s discourse these days centers around “maintaining faith.” It is a defensive and weak narrative.

Two years ago Guaidó proclaimed himself “president,” and he received full support from the US and other world powers along with a group of Latin American governments. His plan seemed strong: he was on the rise. Since then, however, Chavismo successfully cornered Guaidó, who has nothing to offer now: no plan, no strategy, no discourse.

At present, the US knows that its strategy didn’t work, so new channels will have to open up, which could mean that the US government might exprore flexing the blockade in the context of a negotiation where requesting Maduro’s resignation is not the first step, as was the case with Donald Trump.

The way in which the US addresses the “Venezuela issue” must change. That is the most important lesson to be drawn from the December 6 elections and other recent events. Will the next administration be able to think beyond parallel governments, paramilitary interventions, diplomatic siege, etc.?

Chavismo is resilient. In its early days, the Bolivarian Process faced coups and oil sabotages [2002 and 2003] and attempts to take the democratic process off track [2005]. Then came a period in which the opposition entered the democratic pathway. However, since 2014, there has been a return to the old, anti-democratic logic. Now that the violent expulsion of the government has clearly failed, I expect that we will see a growing return of the opposition to democratic channels.

Interestingly, the government has been able to maintain itself through the course of changing opposition tactics. This may be contrasted to, for instance, Bolivia’s MAS government which, after three weeks of pressure in 2019, was toppled only to be recovered one year later by popular vote.

The extraordinary resilience of Chavismo has demonstrated that the right cannot oust the government by violent means. There are no shortcuts.

Long before the parliamentary elections, Chavista militants began to talk about the process of “disaffiliation” from politics. Other analysts talk about the “depoliticization” of Venezuelan society. How would you characterize the current panorama in this regard?

I would say, first, that I don’t think there has been a depoliticization process. Venezuelan society is highly politicized. Venezuelans do have an interest in politics, they have tools for analysis, and they regularly use political categories. However, many don’t feel interpellated by the different political tendencies now. That is the question at hand.

While there are symmetries, there are also asymmetries. Chavismo has a party, it has a structure, and it has diverse movements inside the bloc. The opposition doesn’t.

So, again, I would not say that there is depoliticization, but there is a process of distancing. Many see that there is a game underway, but their problems are not going to be resolved in the match. That being so, they ask themselves: why should I vote in the parliamentary elections if all I can expect is more of the same? But that, in itself, is a political attitude.

However, I should also add that, while the discourses are repetitive and don’t engage the people, behind the curtains things are happening, and people are also aware of that. There are channels for dialogue taking place – international negotiations such as the one mediated by Norway last year –, and there are new deals being implemented in the economic sphere, opening to favorable conditions for private investment, etc.

To be continued in Part II…