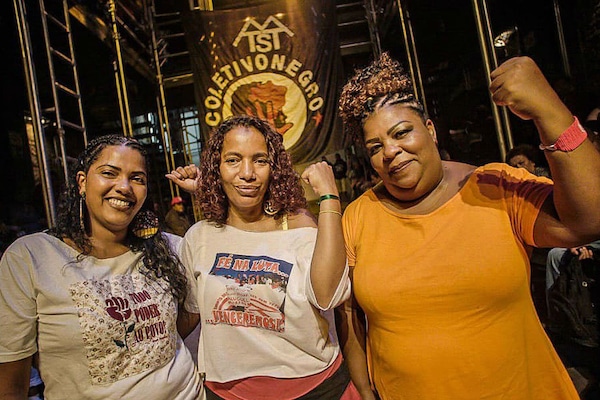 One only has to look around any occupation by the Brazilian Homeless Workers’ Movement (MTST) to notice that the majority of people there are women. Research done in 2014 by a volunteer tech support group acting alongside the movement estimated that women make up approximately 70 percent of active members.

Contrary to what happens in many places, in the leadership and coordinating bodies of the MTST, the gender pattern is not only reflected but also magnified. It is women leaders who organize the day-to-day of the occupations, head up the assemblies in the territories, and participate in the negotiations for land.

The reason the MTST is overwhelmingly made up of Black women is precisely because of their role in society. Women are primarily responsible for home life. Portraits of Gender and Race Inequality, a research project undertaken in 2014 by the Institute of Applied Economic Research, indicates that 34.4 million Brazilian women are financially responsible for their households, nearly 40 percent of families in the country.

Despite being pillars of their communities, Black women remain the most marginalized sector of the working class, disproportionately employed in the least protected and compensated sectors: service and care work. According to another research project by Brazil’s Institute of Applied Economic Research, The Challenges of the Past in Domestic Work of the Twenty-First Century published in 2019, Black women today are 64 percent of domestic workers—the profession with the least labor rights in all Brazilian legislation, only winning the same level of rights as other workers, including the full right to unionize, in 2013.

In the occupations of the housing movement, this work, so devalued by our society, is transformed into an important instrument for the creation and nurturing of political relationships and the empowerment of self-activity. In an occupation for housing, to collectively think through how caregiving and childrearing activities will happen is not a marginal question—it is fundamental in guaranteeing the participation of women workers.

Food preparation is not an invisible task, it is central to political life: the kitchens and pantries are the main spaces of the occupations, where people meet daily to exchange information and experiences, and therefore also from where leadership arises.

To understand this process of cultivating women’s political leadership from the starting point of the housing movement, and to think about how they can truly be represented in the Brazilian elections, we spoke with Jussara Basso and Débora Lima, MTST organizers for more than ten years.

Jussara Basso is the coordinator of the Vila Nova Palestina Occupation in the Jardim Ângela neighborhood of the M’Boi Mirim district of the South Zone of São Paulo, the third most populous district of the city. The region has one of the highest proportions of Black Brazilians in the municipality: while the city average is 37.8 percent Black, 56 percent of the population identifies as Black in M’Boi Mirim. The occupation, which began in November 2013, was christened in solidarity with the resistance of the Palestinian people, who had just suffered Israeli bombing in the Gaza Strip.

To this day, Vila Nova Palestina continues its battle with the government for authorization to build homes there. The state’s main argument against the ongoing residence of the almost eight thousand families in the locale is a tried and true one: the opportunistic weaponization of environmental concerns to violently displace people in the very south of São Paulo. Because the enormous land area in which the occupation stands is also home to water reservoirs protected by environmental regulations, the government’s argument is meant to prevent the occupied portion of land from being used by the population.

Débora Lima is the coordinator of the Marielle Franco Occupation in the North Zone of São Paulo. The encampment was named in honor of the Black socialist city councillor of the Socialism and Liberty Party assassinated for her work with communities and families affected by the genocide of the populations of the peripheries. The name given to the encampment was important not only to keep Marielle Franco’s story alive, but also to not let the investigations into her execution be suppressed or forgotten.

Jussara and Débora ran for a seat in the Municipal Chamber of São Paulo in the recent 2020 elections as part of the Socialism and Liberty Party, on the collective Juntas–Mulheres Sem Teto (Together–Homeless Women) ticket, along with Tuca Cardoso, another Black woman leader of the MTST. They received 21,172 votes, becoming the first reserve ticket for the Socialism and Liberty Party in the Municipal Chamber.

Tainã: How do you see the movement as bringing politics to the lives of women of the peripheries? How does the movement understand this question of women’s protagonism?

Jussara: It is the women who sustain the home, pay rent, fight for their kids at school, demand basic healthcare services. So, we could say that women have always exercised a type of feminism. Even with all the obstacles, even earning lower salaries, we already occupy roles that used to only be done by men. Countless women are construction workers, countless women are bus drivers, so this is already happening.

But even so, it is women who in their families most urgently see the need to improve the quality of life. And their own house is the main issue. In this sense, the majority of people who come to the movement, who are looking for this, are women. In the movement, you have a communal kitchen that is collectively stocked, staffed by volunteers, and serves everybody. For the women, this engenders feelings totally contrary to the individualism and competition fostered by society.

Débora: The MTST opens space for women to be protagonists in the occupations and plays a very important role in building, with the coordinating bodies, this overwhelmingly female militancy.

When I joined the movement, I saw those women getting on stage, speaking, and I thought, “wow, we don’t see this kind of thing, because the society in which we live tells us that voices are male.” There are groupings in the occupations in which 70 or 80 percent of the main organizers are women.

Today, the task at hand is to raise the consciousness of women who don’t have that kind of political awareness, mainly because people are so disillusioned with politics. For us, it’s a question of raising the level of political consciousness, slowly but surely.

Camila: In the context of the pandemic and the Jair Bolsonaro government, how have the Black movements and feminist movements in Brazil fought the politics of the far right, and how has the MTST dealt with the pandemic in relation to its women members?

Jussara: We know that Bolsonaro is a sexist, racist, homophobic, and transphobic president. It makes us very sad that the wins of the feminist, Black, and LGBTQ+ movements are being chipped away. The truth is that, because of this, racism in the peripheries today has gotten worse. When the president legitimizes discriminatory acts against Black people, against women, this reaches a sector of the population that had these ideas hidden away and now feel empowered by Bolsonaro.

But it is also an important moment in which the movements are fighting to put a halt to those rollbacks. There is a rightward turn, which has affected all of Latin America, but the social movements have also had an important role in the resistance against the far right and in defense of democracy.

We are part of this. The MTST is a housing justice movement, but within it we have collectives, of women, of Black people, of LGBTQ+ people. We believe that our mobilization has combated the stripping away of rights as well as the extremism of the right wing.

The MTST understands that struggles are intersectional. There are movements that stick to this or that banner, but we know that fighting capitalism, the genocide against Black youth in the peripheries, sexism, and right-wing politics in general has brought a wave of understanding; it has generated unity against this advance of conversative politics in Brazil.

As Débora said, the pandemic and global economic crisis have exposed the fragility of democracy in this country, in which there are no politics or policies that maintain the dignity of life for those at the margins of society.

Here, since 2018, women set the tone in the streets, starting with the Ele Não (Not Him) mobilizations against Bolsonaro, fighting this political regression. That movement stayed in the streets. During the first mobilization since the lockdown, we held an action in Largo da Batata [western region of São Paulo] that was truly anti-racist and anti-fascist, and took our concerns, the issues that we tend to every day in the movement, to the streets.

The anti-racist wave coming from the United States, since the murder of George Floyd, hits home here. In Brazil, police brutality against Black and poor people has always existed, and today it is intensified. This wave is helping a new culture of public condemnation to emerge, which the media itself used to hide but now has been giving room to, because of the force of the movement around the world.

This strengthens us. It is in these moments of most social unrest that these uprisings happen and allow us to really fight everything we face, all the ways society goes against us: Black people, the poor, women, the Indigenous, everyone who is denied their rights. We understand that we are living through a somber moment in history, but it is in this moment that women, Black people, and social movements are setting the tone, contesting the politics of collapse and austerity.

Débora: In the MTST, women’s autonomy is a priority. Most women who live in violent homes are still there because they are dependent on their aggressor, on their house. So we defend public policies that guarantee women a living wage, that get us closer to a housing program geared toward women.

We had this during the period in which Luiza Erundina [candidate for deputy mayor of São Paulo on the Socialism and Liberty Party ticket in the 2020 elections] was mayor of São Paulo: the houses built by communal work, like mutual aid, were always meant for women. We believe that this will help women win autonomy, making their homes truly theirs, not just a place in which they serve. We are tired of stories of women suffering domestic violence. We want those women to leave their violent homes and be free.

Camila: Mothers are the ones primarily responsible for caregiving and giving dignity to life, as they do the overwhelming majority of paid and unpaid work in society. How do you seek to represent these women in the elections and what are the politics that have to be envisioned for them?

It raises the question of paid and unpaid work, and policies that protect women. It is single mothers, workers, women that today do most unpaid domestic labor. And these women, these workers, are invisible to the state.

Social services have been cut by more than 30 million reais in the last four years of the Brazilian Social Democracy Party in the municipality of São Paulo. It is why we have to reclaim the debate about budget priorities, where funding needs to go. We believe that public money has to go to programs for the women of the peripheries. For us women, one of the priorities is to fund and decentralize the daycare centers so that they are more accessible to working-class mothers.

There is another important point to make about the underreporting of domestic violence cases, which is also an epidemic. Today, we do not have public policy that effectively fights or responds to violence. The majority of services for women are in centrally located places, which are hard to access for women in the peripheries. We need centers that specialize in the care of women that are geographically focused, that serve every community.

This article was originally published in Portuguese by AzMina on November 28, 2020.