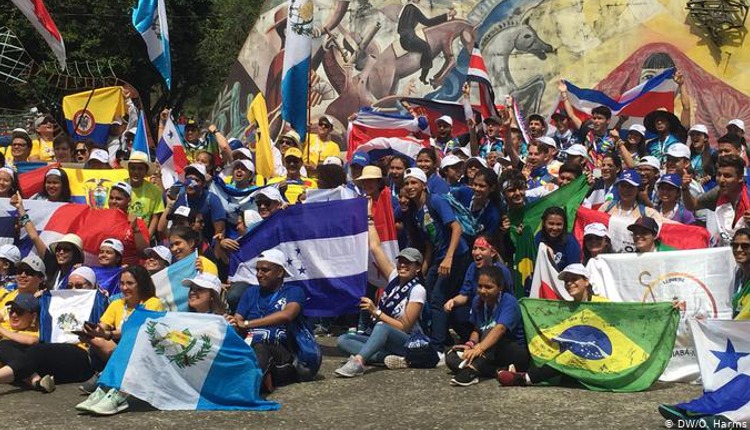 One of the objectives of the United

“We are disputing a space that is ours,
education has to be in the hands of our communities
In our blood are all the people, in our chest is the rage,
feeling how Latin America suffers”.

– Mapuche youth at the First Meeting of Youth, Education and Pandemic.

In the context of virtualization in Latin America, a large number of forums were held on the subject of youth, although it was inconsistent to exclude them. As a response to this contradiction, countries that are members of the Latin American Campaign for the Right to Education (CLADE) organized a cycle of Student Meetings, under the name of Youth, Education and the Pandemic[1] These spaces of expression were constructed as specifically youthful spaces and authentically open to intergenerational dialogue.

The United Nations Youth strategy, Youth 2030,[2] in one of its objectives insists on strengthening the bases in such a way that “they are not only heard but understood, not only involved but also empowered, and that young people not only support but lead global initiatives and processes”. Latin American youth participated in the meetings with training, conviction and deep commitment to just struggles. How was this youth formed, what education did the youth organization promote, what are their teachings and their own learning, how do we put conditions to contribute to the above mentioned objective by learning from the youth themselves? Here some reflections of its chair:

Joy in youth voices. The speeches were extremely powerful, the multicultural voices of the youths wake up to the “primary us”, generate a psychic contagion with knowing that they are willing to give their lives for a cause and generate a genuine generalized reaction of joy that draws a smile. In the midst of the constant bad news in our region, the youth are always the good news.

Indignation and hope. Youth positions reflect indignation before the world system where governments, corporations and power groups have abused our peoples and our territories. The broad strategic vision, the plural and diverse vision to organize themselves generates positive feelings and sensations in the campaigns. It makes Carlos Núñez’s slogan resound: “Hope has not died on me”.

A critical stance in the face of injustice and inequality. There is a constant manifesto that directly questions the capitalist system and its neoliberal expression in Latin America, from the youth it is a resounding NO to the violation of human rights, the policies and practices of looting, the repression and the nefarious actions of extermination. The youth demand insists on the redistribution of wealth, the cancellation of debts, the right to decide, respect for diversity and the Pachamama, that the states guarantee rights, that the youth be taken into account and have spaces in decision-making and in public policies, that education be emancipatory, liberating, building another possible world.

Political formation. In favor of just causes, we vehemently observe that the youths have taken up the sword of the praxis of the grandmothers of the Plaza de Mayo, of the resistance of the original peoples, of the popular movements, of popular education, of the thought of Paulo Freire, of the conviction of 1968, of the struggle for the defense of water, of the Cuban revolution, of the utopia of the dreamers of “lost causes,” of the ancestral community practices, of the sentiment of the neighborhood. The history, science of the present, and the grain of sand of so many people in diverse places and times continues being incarnated in the youths from Mexico to Argentina including all the Great Homeland. In themselves they are history and horizon that offer with clarity the potential for Our America.

Free and popular education. In the virtual spaces and beyond them, concrete names, people with their own stories have shown the passage from being biological to biographical, they make present the pedagogy of the oppressed and the liberation. With roots and novelty, they question cacique, anti-democratic and verticalist practices (even within civil society organizations) and open the doors to debate from a critical conscience and a transforming approach. In the struggle for the human right to education, we learned to confront ourselves profoundly with the clear and forceful voice of the youth in at least three ways: self-awareness to transform our daily patriarchal, colonialist and capitalist practices; the way we organize and fight for a more just order; and to deeply question the values of the world system in the face of which, time and again, the expression of youth resounds with a resounding NO to how it is now and a YES to a dignified life.

Seeds and fruits. This history of struggle and resistance gains ground when youth space is favored, many times with adult support, others without it and many more in spite of it. What has been achieved in Chile recently was born of high school students; the youth mobilization now has repercussions in Peru in the face of the disaster of those who strive to govern, the feminist struggle with a wide representation of young people, the struggle for the defense of territory and the ancestral ethnic dignity of native peoples, Afro-descendants, or gender identities are a clear example. These struggles that are born from sensitivity and conscious rebelliousness are not new to this time, but they are permanently novel with the protagonism of youth.

Trust and solidarity. The audience of the different meetings (5 Latin Americans in 3 editions and some national ones) not only admired the political positions of the youth but also generated the certainty that another world is possible and that the struggle to defend the human right to education will not stop. Among the youth, in a genuine and often spontaneous way, there is a feeling and a language of inclusion, comradeship, fraternity, sisterhood and, above all, that everything was organized with solidarity, empathy and the sharing of our times and resources. Revaluing that the transformation is achieved “looking to the sides”, downwards and in community.

Alterity and laterality. In the face of the lack of technological resources, the precariousness, the privatization of life possibilities, the denial of basic access to connectivity and even lower, to the minimum services to live with dignity, the youth continue to reinvent themselves. On the margins of school models and social paradigms, they continue to reinvent themselves among peers with a vision of the other and of the other, with ample creativity, be it in partying, dancing, music, freestyle or social networks. This praxis of otherness and laterality is a possibility as a transformative and transcendent strategy that we should learn from Latin American youth.

Intergenerational dialogue and dignified rage. The right to education of youth can never be guaranteed without them; it is up to us from the national organizations and forums to be a platform, a springboard and a shelter. We need, we remember, we relearn and unlearn once again, spaces specifically for youth, not excluding other voices, but with firmness in the slogans in the Latin American emancipatory struggle and permanent dialogue with children and adult voices, as we are taught today by the voices of Latin American youth, teachers of joy and hope. In such a way that the dignified rage that they taught us with their voices is also the dignified rage that we need to transform our practices until we achieve ? the education that we need for the world that we want.