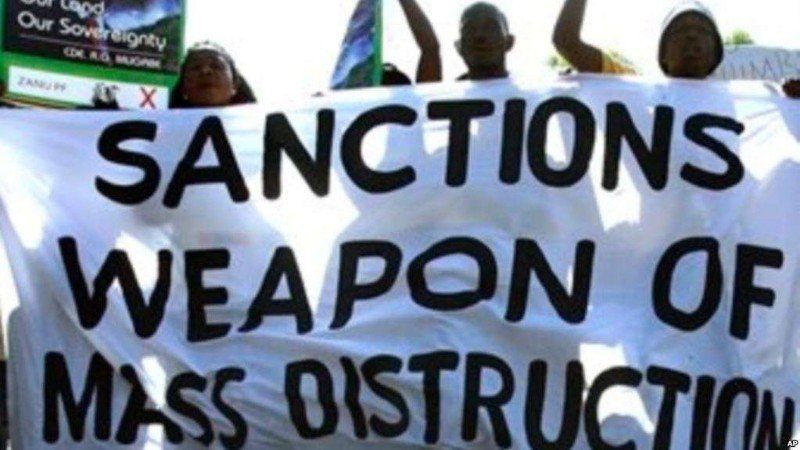 Every day it becomes more necessary to form a committee, club, association or movement of countries illegitimately sanctioned by the United States.

Based on international law, nothing justifies continuing to accept arbitrary measures taken by the United States government to the detriment of those countries that do not abide by its instructions.

Respect for the sovereignty of each of the countries that make up the international community is a basic requirement for ensuring peaceful coexistence, especially at this time, when humanity is facing the most difficult challenge in its historical development.

That is why it is urgent to put a stop to such arbitrary actions and to begin a counteroffensive, agreed upon by the countries that have been harmed, that makes the aggressor country and those who accompany it feel the rigors of its geopolitical weight.

To a great extent, China has already been doing this through symmetrical responses to the actions taken from Washington against the Chinese economy. It can be assumed that other similar measures – more boycotts of the products and enterprises of the aggressor countries, as well as joint coordination to lessen the harmful effects of the sanctions – would not only make the imperialist countries retreat, but would also strengthen the bloc of countries under attack, which would allow them to impose, once and for all, a respectful, harmonious and peaceful coexistence.

As a precedent to this proposal, the Non-Aligned Movement (NAM) agreed in June 2019 to install a working group to study the effects of the sanctions. It was the government of Venezuela, through its Foreign Minister Jorge Arreaza, who promoted this initiative. “Our movement is going to install a working group that will be dedicated to see how the countries face and overcome the effects of these sanctions”, manifested the Minister of Foreign Affairs.

Months later, already in this singular year of pandemic, the Iranian deputy, Mohammad Reza Mirtajaldini, advocated the creation of a club of countries sanctioned by the United States. The Persian legislator expressed that the U.S. government imposes sanctions on those who defend positions contrary to its dictates, therefore, it is worth forming a club, he called it, in order to improve relations between the countries sanctioned, as well as to agree on strategies for confronting the violating measures that do not respect international law.

Many voices have already been heard repudiating the despotic behavior of the United States. But after the outbreak of COVID-19, the demands of different countries and multilateral organizations for an end to unilateralism and the policy of sanctions increased, as is logical.

In this sense, last October 6, an important group of countries, led by China, made a categorical call in the UN to put an end to the arbitrariness of the United States and its allies. The Chinese ambassador to the UN, Zhang Jun, on behalf of some twenty countries, demanded that Washington “stop imposing unilateral embargoes against other countries, particularly because they affect the global fight against the new coronavirus pandemic, which causes COVID-19. This declaration was signed by Iran, Venezuela, Nicaragua, Cuba, Belarus, North Korea and Russia, among others.

However, everything indicates that the US government will not cease in its policy of harassment and pressure on all those who today, in one way or another, question its hegemony. Many elements indicate that American decline would be the main cause of this increasingly bellicose behavior.

Hence the urgent need to break out with an international organization of sanctioned countries that decide to join efforts to openly confront the United States, with the certain possibility of adding other countries that have not been sanctioned but see this practice as a concrete threat to their sovereign decision-making power.

The time is now. It would be very dangerous to continue waiting. We know that the imperialist ship is leaking everywhere. It is neither possible nor convenient to wait for an implosion to end once and for all with American arrogance. Surely in many respects the United States continues to be the world’s leading power, although it remains to be seen what would happen if it were to have to confront a bloc of countries, which together are far superior.

Would it be a great risk for the sanctioned countries to make a bloc to oppose the Americans? No doubt it is, but we must bear in mind that the planet and humanity are at risk every day, as long as the American elite continues to irresponsibly exercise the power it still holds.