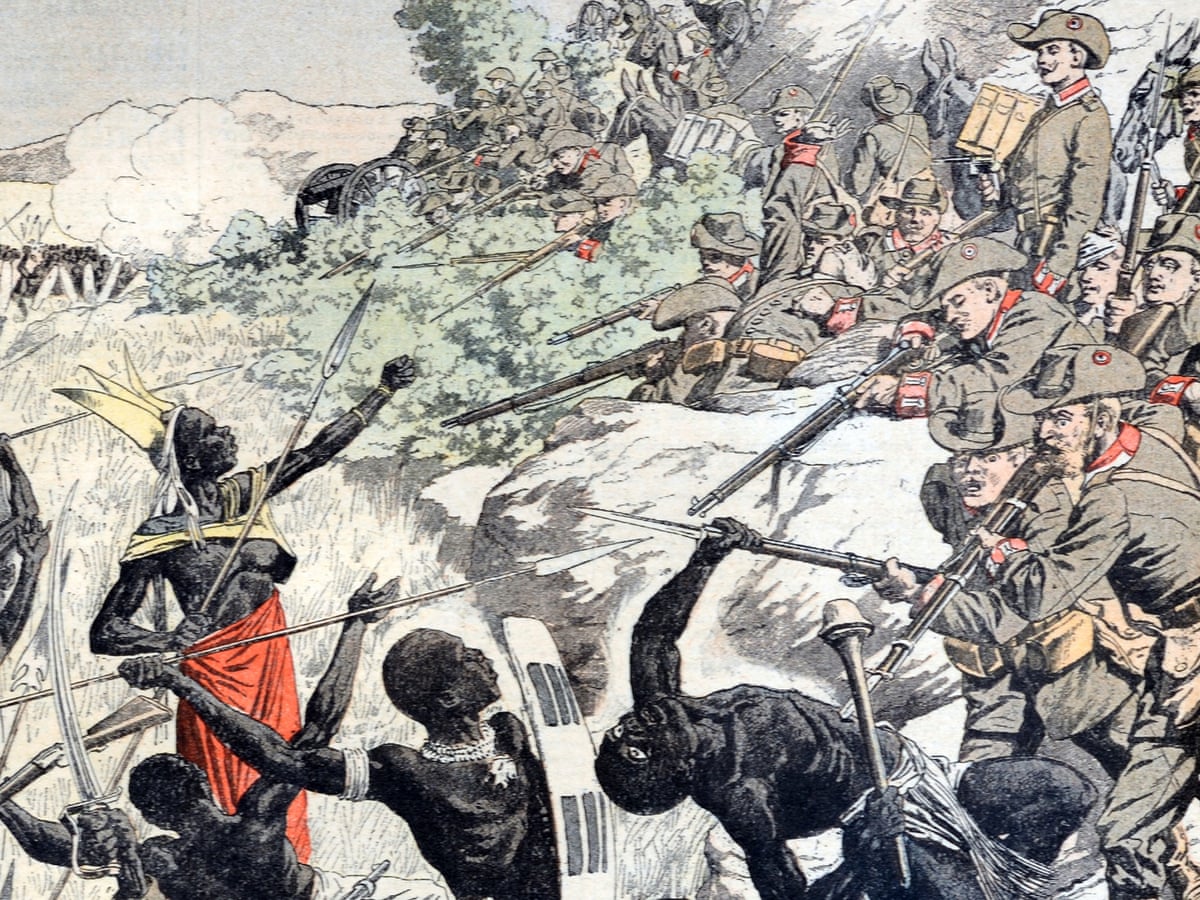 Tens of thousands of men, women and children shot, starved, and tortured to death by German troops as they put down rebellious tribes in what is now Namibia.

The problem that colonialism and imperialist hegemonies constitute for culture and human social development is fundamental to the historical analysis of any era. Under this prism we will see that the political, social and economic map of the world was formed -in good part- from these phenomena related to the ambition of domination of some nations or groups, over others. – Alejo Brignole, Concerning Anti-Imperialist Thought (Part I)

Imperialism as a norm of tutelary rule (one nation protecting others under different forms and procedures) was a doctrine that enjoyed legitimacy and justifications of various kinds towards the middle and end of the 19th century, its moment of greatest rise in modern times.

During those years, Europe was experiencing a renewal in social philosophy, based on new premises drawn from biological science, botanical and zoological observations that gave rise to new theories about creation and evolution.

These scientific observations on plants and ecosystems made by Darwin (1809-1882) were later used by social thinkers to explain the functioning of human communities and their civilizing relationships. This helped to consolidate the idea that there are nations, races and societies that are more capable or evolved than others, and that they were called upon to protect the most primitive races or nations.

Of course such interpretations lacked the basis of the science applied by Darwin in his book -a real revolution that improved the understanding of nature. However, these methodless analogies served to justify the exploitation and razing of technified nations, over others of non-industrialized economies or physiocratic wealth.

This new vision of the material and social world generated a current that was known colloquially as social Darwinism, with Herbert Spencer as one of its greatest exponents. With his 1863 work, Principles of Biology, Spencer took up again -or more precisely reformulated- some ideas already exposed in The Origin of Species. Charles Darwin himself would also elaborate a controversial theoretical corpus in a later work entitled The Origin of Man, published in 1871, in which he traced parameters now considered clearly racist and supremacist.

In this new work, Darwin established under a scientific varnish different human typologies, differentiating between civilized races and wild races, defining between both a biological and ontological separation (as differentiated entities) and not only cultural or socio-economic instrumentation. In one of his most discussed paragraphs, the father of the theory of evolution stated that: “(…) In some period of the future, not very distant, perhaps in a few centuries, it is almost certain that the civilized races of man will exterminate and replace the wild races all over the world”.

Charles Darwin was undoubtedly influenced by the work of his contemporary, also an Englishman, Thomas Malthus, who had published in 1798 his influential Essay on the Principle of Population, which addressed the problem of overpopulation and forms of eugenics as a solution.

In an era of technological discoveries and the emergence of new social classes due to industrial mechanization (the Communist Manifesto of Marx and Engels had already been published in 1848), it is not strange, then, that such interpretations of the physical and cultural world, carried out from a Eurocentric perspective, have served as a doctrinal basis for a truly unbridled imperialist impulse that was unleashed among the European powers during those same years.

The colonial division of Africa, of Southeast Asia and vast island territories of the Pacific Ocean, was the direct result of these clearly supremacist ideas, contained in those groundbreaking works for their era and of enormous academic and sociological influence, in spite of the fact that they were harshly criticized by more rigorous humanist and scientific currents.

The idea of a world divided between evolved nations and others plunged into a diffuse barbarism was a philosophical platform to justify the hegemonic advances imposed by the new industrial capitalism: an international division of labor where a few countries, owners of the technique, sought to expand to peripheries rich in essential resources for mechanization and commerce. The division of Africa agreed upon by the European powers at the Berlin Conference of 1885, produced three decades later the First World War and its consequences subsist in the tragic African reality, harassed by Europe under new forms of informal colonialism.

The Belgian domination of the Congo under the reign of Leopold II, together with the competing British, German or French colonies, created international tensions that finally erupted in the First World War, which was also the first great modern demonstration of organized barbarism.

The beginning of the Great War of 1914 meant the end of colonial expansionism in Africa, but it also exposed a paradoxical situation from a Darwinian perspective: the self-declared civilized countries were the precursors and protagonists of the worst primitive acts performed by humanity: trench warfare, programmatic genocides, the use of chemical weapons, the use of flamethrowers to burn cantoned troops alive, or the inhumane concentration camps (which were a British creation in the Anglo-Boer wars of the late 19th century).

That so-called ‘civilized’ doctrinal approach outlined by Darwin, Spencer and others found its zenith of contradiction in the death camps of Nazi Germany and the invention of nuclear weapons, with Hiroshima as the culmination of that barbarism. He demonstrated that technified civilization is not thus exempt from primitivism because it uses advanced methodologies. Barbarism was enhanced by this idea of the superior protecting the inferior. This is its paradox.

As we see, the consequences of this colonial scientific racism exported to various regions of the world ended up affecting not only the peoples devastated by technocratic imperialism, but the imperialist metropolises themselves, which were finally crushed together in a basically irrational desire for geopolitical and economic domination. In other words, primitive.

This idea of technified countries imbued with a racial component (Caucasian peoples dominating others who are not), is essential to understanding imperialist phenomenology. Something that had profound repercussions in Latin America and for the Spanish empire itself, which, in spite of being an expansionist force, was considered the undesirable expression of an inferior nation whose conquered spaces had to be taken away in order to give rise to the advance of pure white man, understood as Anglo-Saxon or Germanic, without the Moorish mixtures of southern Europe. From this reading, the mestizo Spanish race was far below in the zoological scale of the rest of Europe. The American advance on Cuba, the Philippines and Puerto Rico (the last important Spanish bastions at the end of the 19th century), was a maneuver supported by these supposed Darwinists. The United States thus joined the European colonialist currents, taking the Hispanic territories and the new Latin American republics as the new space to dominate and civilize, as civilization meant domination through economic subordination and other forms.

(To be continued in part three…)