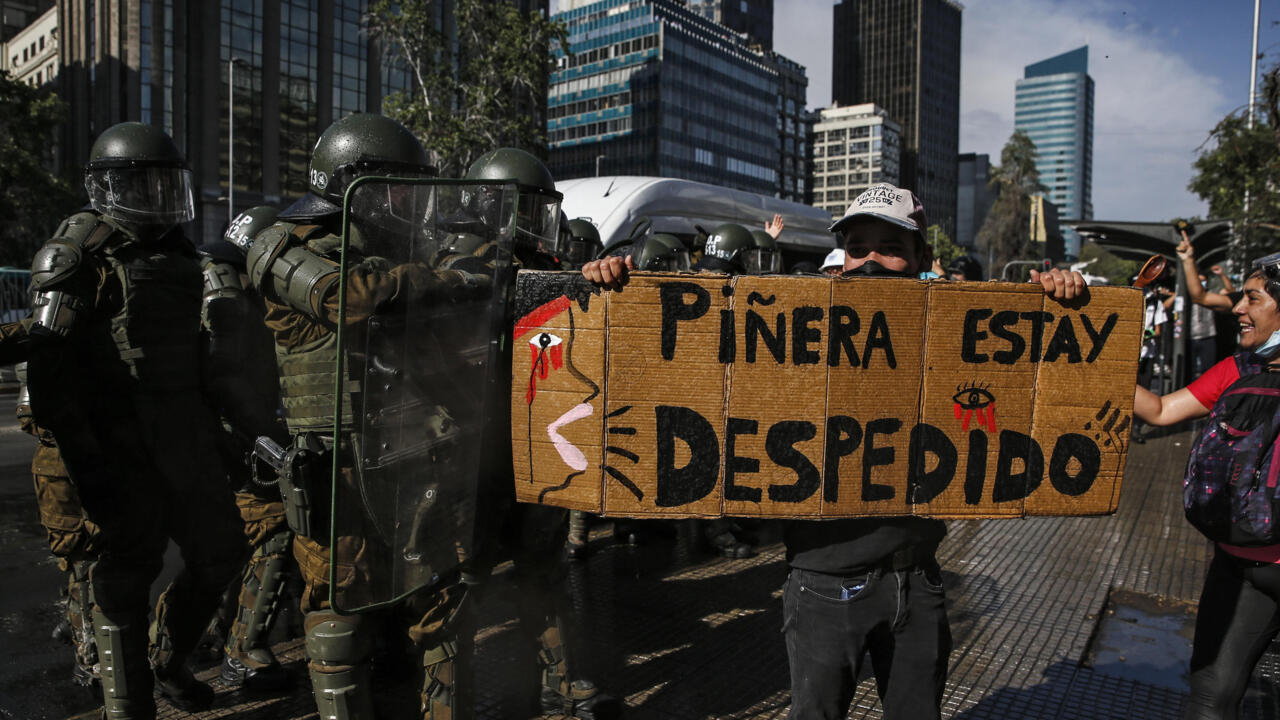 Hundreds of people protested in Chile’s capital Santiago on Wednesday to demand the resignation of President Sebastian Pinera over police repression of the country’s social protests. A demonstrator holds a sign reading ‘Pinera you’re fired’ next to riot police during a protest in Santiago, Chile, November 18, 2020 JAVIER TORRES AFP

We are witnessing a challenge to neoliberal policies throughout Latin America. Recent events in Chile, Peru, and across the region suggest that neoliberalism is most compatible with democracy in nations that are exploiters. For those nations and peoples who are historically exploited, however, it has met strong resistance. In fact, neoliberalism has frequently been implemented by force, starting with Pinochet’s policies in Chile, “ground zero” for the floundering neoliberal experiment. In part one of this two-part series, we’ll examine Chile’s case.

Mainstream media doesn’t mention it much anymore, but Chile was heralded as the “first great experiment with neoliberal state formation,” the testing ground for the theories of university professor Milton Friedman and his Chicago School acolytes. Chile in 1975 provided the ideal staging ground for a fresh economic agenda. Chile’s elected socialist President Salvador Allende was dead, the dictator Augusto Pinochet had seized the reigns of power, and an overhaul of the entire system could take place unimpeded by dissent. Pinochet and the repressive forces unleashed in Chile eliminated socialists and communists, killing thousands and torturing many more. Over 200,000 Chileans were exiled.

This is pertinent in the wake of Chile’s October 25, 2020 plebiscite — approved by 80% of voters — that will remove the Pinochet Constitution and replace it with one created by a body of elected citizens. The current Constitution was ratified on September 11, 1980 — seven years to the day after Pinochet’s coup led to Allende’s death — via a constitutional referendum now regarded as fraudulent. The 1980 Constitution was largely the product of Chicago School convert Jaime Guzmán. It provided, among other details, for Pinochet’s appointment as President of the Republic for an eight-year term, redefined the military dictatorship as a “civic government”, and banned any doctrines based on “class struggle.”

Tomás Undurraga, citing the work of economists Philip Mirowski and Dieter Plehwe, defines neoliberalism as “a multi-centric movement anchored in a network of think tanks and pro-market institutions that connect political, economic and scientific elites. Some of the epistemic commitments that mark this ‘thought collective’ are: markets must be built, they do not emerge spontaneously; redefining rather than merely destroying or minimizing the state is in the best interest of the market and those that profit from it; the best solutions to problems caused by the market are themselves market-based (e.g. carbon credits, the sale of human organs or vouchers for education).”

Neoliberalism is not a national project, but an international imperialist project that attaches historically exploited post-colonial nations to US hegemony. “Perhaps most commonly,” Undurraga elaborates, “the neoliberal project is identified with a set of policies that encapsulate the prescriptive development stance of ‘Washington Consensus’ institutions from the 1980s — i.e. the International Monetary Fund (IMF), the World Bank, and the International Development Bank. These policies sought a retrenchment in the state’s role, privatization of public assets and cuts in public expenditure.”

Neoliberalism is more than an economic model, it’s an ideology with political, social, and cultural components. It seeks to weaken state social spending — while reinforcing police forces — and to measure progress by market factors. Instead of turning to governments and social programs citizens would find their needs met by corporations, and profitability would guide political decisions.

“Conservative think tanks like the Heritage Foundation and the American Enterprise Institute linked their defence of ‘individual freedoms’ to the defence of free markets,” continues Undurraga. Neoliberals argue “that society is best served by maximum market freedom and minimum intervention by the state, claiming that such a situation will enable individual entrepreneurial freedoms and skills to be maximally developed. In this context, the government’s role is limited to providing security, protecting private property, and creating and maintaining markets.”

“Neoliberalism was from the very beginning a project to achieve the restoration of class power to the richest strata in the population,” concludes David Harvey succinctly.

By 1982, Chile was in crisis. Foreign debt had risen astronomically, and unemployment reached 25%. Massive state intervention, in the forms of government bailouts of banks, provided some stabilization, then neoliberal policies continued — in fact, they strengthened. Milton Friedman blamed the crisis on “the country’s departure from the neoliberal model.” For Friedman and his ilk, the response to failures of neoliberalism is always more neoliberalism. However, in contradiction of the ideology’s apparent defence of free markets, it is giant interventions, in the form of bailout programs using taxpayer money, that are prescribed to cure the symptoms of neoliberal disease. Recall the words of Karl Polanyi: “laissez-faire was planned.” Through this process neoliberals continue to argue that their programs have never been perfectly implemented.

Inequalities unleashed in Chile under the repressive Pinochet regime were called — without a hint of sarcasm — the “Miracle of Chile” by neoliberal economists. Some Chileans certainly profited from the new model. GDP grew consistently from 1982 onwards. A variety of economic indicators demonstrated that the plan was working. Investors clamoured for a piece of the pie. Economists, academics and media pundits bickered over supposed benefits accrued by the population, endlessly debating whether poverty had decreased greatly or, alternately, increased greatly.

By the mid-1980s the Chicago School was again touting Chile as a model and the neoliberal doctrine was exported to countries around the world, with or without their citizens’ consent. While democracies in North America and Europe continued to elect neoliberal leaders, nations in Africa, the Americas, Asia, Eastern Europe and the Middle East were repeatedly subjected to neoliberal shock treatment at the hand of despots and dictators.

As Friedman put it in the year 2000, “the really important thing about the Chilean business is that free markets did work their way in bringing about a free society,” a statement conclusively dynamited by the violent repression of Chilean protesters of 2019, and doubly annihilated by the expression of Chileans’ popular will through this week’s constitutional plebiscite.

The Demise of Neoliberalism

Only when enraged demonstrators took to the streets in huge numbers was Chileans’ dissatisfaction with neoliberalism clearly expressed. Police forces were accused of over 8,500 human rights violations during nationwide protests from October 2019 until January 2020. Over 3,000 Chileans were seriously injured — at least 300 suffered serious eye injuries — twenty-nine were killed, and over 2,500 were arrested in the protests. Chile’s national police force of 65,000 had doubled since 1993.

In the long term, neoliberalism had not served the masses. Wealth was distributed unequally, benefitting only a small local elite and the shareholders of international corporations. Economic indicators proved to be unreliable, contradictory, and easily controlled by compliant media in the thrall of private industry.

“The oppressive conditions facing the working class and the precarious position of an indebted middle class in a system in which all basic necessities have been privatized to make a profit, have been ignored, justified, and normalized during the last three decades of democratic governance,” wrote Camila Vergara in 2019. ”The neoliberal model of accumulation by dispossession created massive wealth on the backs of the working classes and through the savage plundering of public property as well as the earth. The legal scaffolding of the neoliberal state allowed the oligarchy to disproportionately appropriate this socially created wealth while shielding political elites from popular pressures through procedural arrangements aimed at insulating public officials from electoral accountability.”

“The benefits were not well distributed,” confirms Harvey. “The country and its ruling elites along with foreign investors did well enough while the people in general fared badly. This has been a persistent enough effect of neoliberal policies over time as to be regarded as structural to the whole project.” In 1991 Jaime Guzmán, guru of Chilean neoliberalism, was assassinated by left-wing guerrillas.

In the United States, though many are familiar with the first amendment protecting freedom of speech, the most recent constitutional amendment of any significance was in 1971. In Latin America, demands for constitutional reforms are rooted in Hugo Chavez’s new Constitution for Venezuela, created in 1999 by a Constituent National Assembly elected by popular vote.

Constitutional reforms are being demanded, not just in Chile, but across Latin America. In institutionalized neoliberalism the Constitution is an instrument that restricts true democracy, protects the elite, and blocks meaningful change. In many cases these Constitutions were drafted under the tutelage of Chicago School economists following Chile’s example.

“The Constitution has helped maintain much of the privatization and power the Chilean right wielded during the seventeen-year dictatorship. Consequently, despite Chile’s reputation as a thriving democracy and economic success story in the region, it ranks among Latin America’s highest rates of inequality,” explains Miriam Pensack.

“At present, we have neoliberalism and privatization built into each of these aspects of Chilean governance by virtue of the settlement imposed by Pinochet,” relates constitutional lawyer Fernando Atria. “The Constitution was not really crafted for Pinochet’s tenure, but rather was intended for a future transition to democracy; the Constitution was for the democracy that was to come. The idea was to establish fundamental configurations of political power that would limit democratic politics after the transition to ensure that the government was unable to make major changes… That is how Pinochet’s Constitution protected the neoliberal model — by neutralizing politics… The document was drafted with the intention of preventing meaningful systemic change. Guzmán’s solution was to give power a democratic form, but with no democratic content. That is to say, the Constitution prohibits democratically elected officials from carrying out any democratic mandate.”

Thereby, voters find themselves in a quandary: we want out of the neoliberal quagmire, but we’re not presented with any options, short of revolution, with which to free ourselves from the rule of the rich over the poor. Neoliberal policies have failed to protect our environment and natural resources from pollution and plunder, have resulted in increased inequality, and have failed to provide essential social and medical services to the population at large, revealed glaringly during the COVID-19 pandemic.

In the second part of this series we’ll look at challenges to neoliberal democracy in Peru and across Latin America.