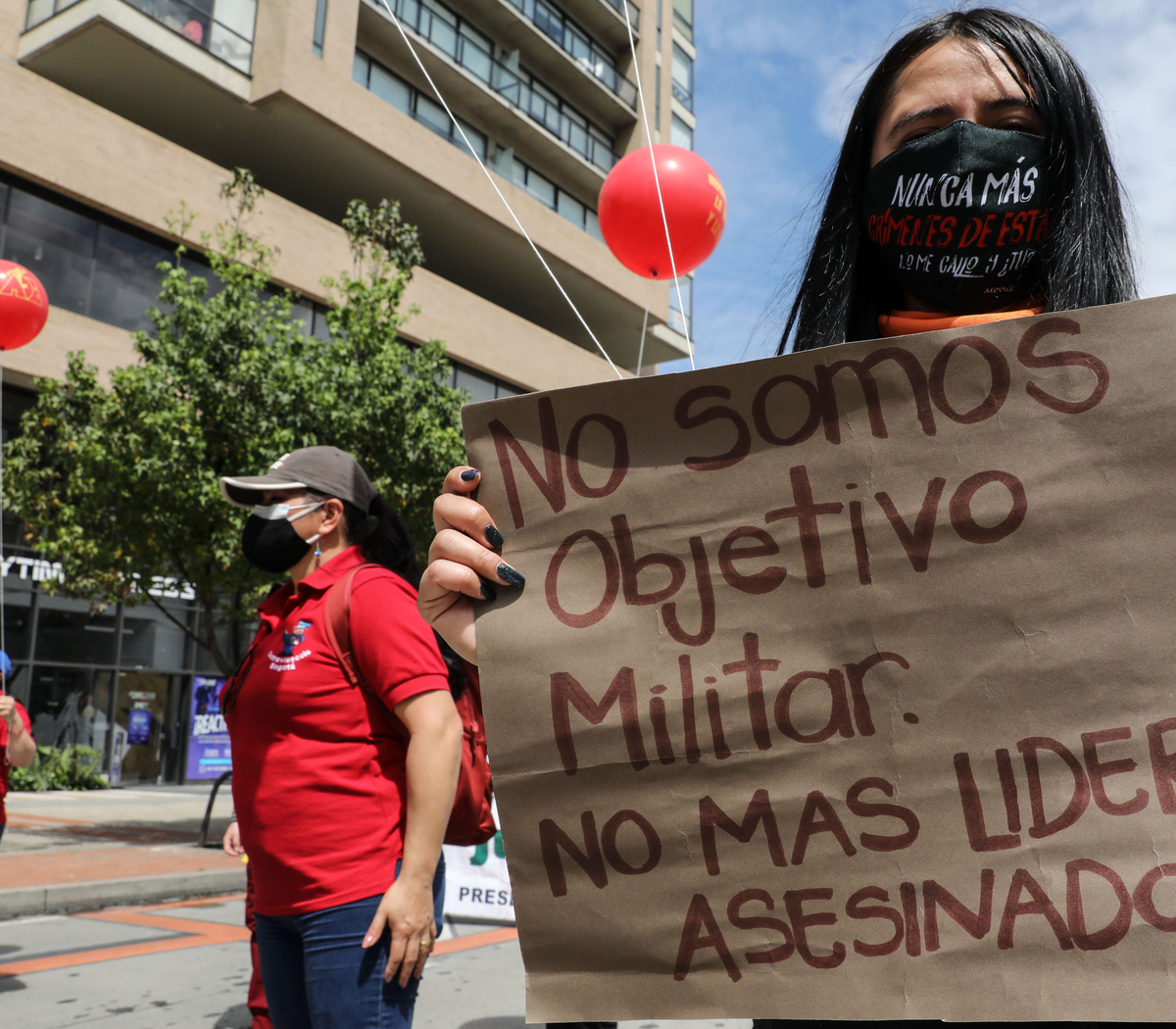 Protest against the Duke government of the multisectorial in Bogota. Image: EFE

Colombia revived the historic mobilizations that took place last year with a national strike against the policies of President Ivan Duque. The diverse group of conveners included unions, students, teachers, doctors, peasant and feminist organizations. The Strike Committee, which brings together many of these groups, expressed its rejection of the economic, social, educational, health and security policies of the president. The call came almost a year after the protests that took place last November and resulted in hundreds of injured and several deaths. One of the victims was Dilan Cruz, 18 years old, murdered by the Mobile Anti-Riot Squad (Esmad). His name was chanted at each of the “plantones” that covered almost all of Colombia.

“Duke neither dialogues nor negotiates”

In Bogota, small concentrations were observed in different points since the morning. The authorities of the Central Unitaria de Trabajadores (CUT), one of the most powerful unions, presented a positive balance of the day. “Here is expressed the polychromy of Colombian society that demands certain rights and attention in the midst of difficulties, because Duque neither dialogues nor negotiates”, said Fabio Arias, leader of the CUT. The Unemployment Committee convened under the slogan “For life, peace, democracy and negotiation of the bill of rights”. This last point refers to a set of demands condensed in a “Emergency Declaration” that this organization presented to the government at the beginning of the year and renewed in the midst of the pandemic. It emphasizes six points. One of them calls for State intervention in the health system to guarantee care during covid-19. Furthermore, the sector’s unions denounced that the government is advancing in the privatization of health care.

Another of the points contained in this document has to do with education. Teachers and professors demanded that there be no return to classes due to the lack of guarantees from the government. One of the unions that mobilized was the Colombian Federation of Educators (Fecode). Miguel Angel Pardo, secretary of educational affairs of this union, maintained that in the midst of the current economic crisis 43 thousand educational centers have not received any biosecurity supplies, according to the newspaper La República. The teachers remembered Dilan Cruz and asked Duque to stop the militarization of the country. “We will continue to defend the lives of our students. We are not going to kneel down before a paramilitary and fascist government,” said William Agudelo of the District Association of Education Workers. Cruz was killed on November 23 last year in Bogotá. The young man was hit in the head with a pellet fired by a member of the riot squad.

The workers also called for the creation of a “basic income” to address the plight of thousands of people. The Commission requested that this income be for six months for all those who are in a condition of vulnerability. They also demanded a moratorium on mortgage loans, consumer loans and the payment of public services for 4 months. At the same time, there were protests against the upsurge in violence in remote areas of the country following the Peace Agreement signed with the former FARC guerrillas in 2016. According to the independent observatory Indepaz, this violence had resulted in 74 massacres so far in 2020. Experts point to the Colombian state for its failure to take control of the territories that the rebels had left behind after the agreement, which facilitated the strengthening of new organizations that dispute the coca business.

With respect to the peasant population, the document calls for the defense of agricultural and industrial production. Indigenous and popular economy organizations asked that food sovereignty and employment be guaranteed under labor rights. “We are here to tell the government that we reject the extractive policies on the territory. Clearer and more forceful efforts are needed to achieve peace,” said a social activist from the northern department of Santander to the digital media Colombia Informa. The mobilization also brought the demands of the feminist collectives. In that sense, the request was for the full enforcement of women’s rights and sexual diversities. They also demanded that the State carry out prevention actions to alleviate gender violence.

The days of struggle against Duque’s policies began in November 2019. At that time, the Colombian government responded with violence, leaving at least three dead and almost a thousand injured. The mobilizations lasted until March of this year, when the first case of the coronavirus was detected. But in September, following the killing of a man by uniformed personnel, new marches against police brutality were unleashed. The strike on Thursday spread throughout the country: Cali, Barranquilla, Cartagena and Medellín were also the epicenter of “sit-ins”. The protest leaders called for new protests on November 21 and 25.