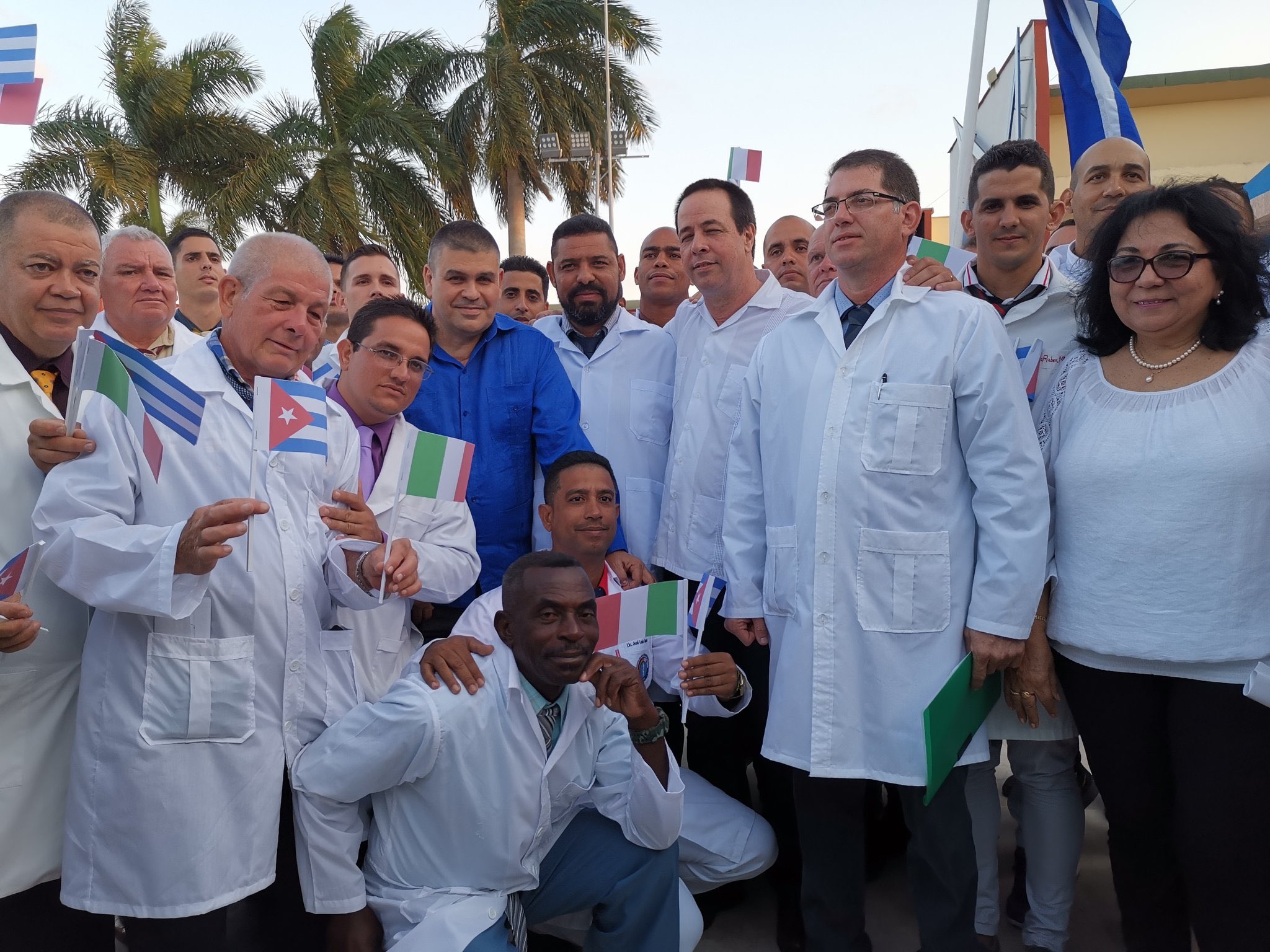 While the healthcare policy of the United States has resulted in the deaths of hundreds of thousands of vulnerable people, their tiny nemesis, Cuba, finds their health care system under continuous assault. No country has more doctors per capita than Cuba, and they’re renowned for their “doctor diplomacy,” whereby thousands of Cuban doctors bolster health care systems in the world’s poorest countries. Throughout the pandemic, US policies have prevented Cuba from helping those in distress.

“Ebola is a challenge that I must fight to the finish here to keep it from spreading to the rest of the world.” – Cuban volunteer Dr. Felix Sarria Baez

When Ebola struck West Africa in 2014, resulting in over 10,000 deaths, Cuban doctors led international efforts that eradicated the outbreak. Over 400 volunteer doctors from Cuba went to Sierra Leone, Liberia and Equatorial Guinea at great personal risk. Ebola is incredibly dangerous: the mortality rate for those infected is around 50%, and there is no vaccine. Cuban volunteer Dr. Felix Sarria Baez contracted Ebola, beat it, and returned to Sierra Leone. “Ebola is a challenge that I must fight to the finish here,” he told the World Health Organization in 2015, “to keep it from spreading to the rest of the world.”

The sacrifices of Cuban doctors were nothing new —for sixty years Cuba has sent medical staff to the frontlines in needy countries. 164 countries have benefited from the help of over 400,000 Cuban medical personnel since 1960. In most cases, Cuba provided medical aid for free.

Cuba has waged one of the world’s most successful campaigns against the COVID-19 pandemic. 129 Cubans have died of the novel coronavirus, a fatality rate that’s 1/60th of the United States’, whose annual healthcare budget of 1.2 trillion dollars is over ten times the entire gross domestic product of the small socialist island. Unlike citizens of the United States, all Cubans have free health care,

When Trump came to power in 2017 he ratcheted up attacks against Cuba, already targeted by US aggression since the 1959 revolution led by Fidel Castro. After the failure of the Bay of Pigs military invasion of 1961, the US turned to economic attacks. The resulting blockades and sanctions have had widespread ramifications for vulnerable populations across South America during the COVID-19 pandemic.

In Brazil, Trump ally Jair Bolsonaro,  gained the presidency in 2018 and quickly attacked Cuba’s doctors in Brazil. Bolsonaro called the doctors “slave labor,” and claimed they weren’t certified doctors, although Cuban medical schools have an excellent reputation. In fact, graduates from Cuba’s Latin American School of Medicine (ELAM) produce certified doctors for over 100 countries, including the United States. As a result of Brazil’s suspension of the Cuban-Brazilian medical agreement Cuba withdrew their 8,500 doctors from Brazil, leaving an estimated 29 million Brazilians without access to health care. “For the poor, this will be an irreparable loss,” lamented Brazil’s former President Dilma Rousseff.

Without Cuban medical aid Brazil’s response to COVID-19 has been lamentable: over 160,000 Brazilians have perished, a rate almost 70 times greater than Cuba’s. Many lives would have been saved with Cuba’s expertise.

Bolivia has seen their fair share of news coverage recently, as new President Luis Arce is set to take office on November 8th. When Evo Morales was deposed by the military last November and Jeanine Áñez declared herself president, one of her first orders of business was expelling Cuban doctors, claiming they were “false doctors” and accusing them of fomenting protests calling for Morales’ return.  A week after Áñez seized power all 228 Cuban doctors had returned home. Then came the novel coronavirus, with devastating consequences: Bolivia’s death rate has been about the same as Brazil’s although, in the case of Bolivia, the damage may be mitigated once Arce takes office, as we can assume that his socialist mandate will welcome the return of Cuban medical staff. Nevertheless, irreparable harm has been done: Bolivia has lost over 8,500 citizens in a country with only eleven million inhabitants.

Ecuador’s situation is much the same. When Lenin Moreno came into power in 2017, he reneged on his campaign promises and adopted a neoliberal agenda. Moreno evicted Julian Assange from asylum in the Ecuadorian embassy in London, approved an IMF loan bundled with austerity measures—resulting in massive, prolonged protests—and terminated Ecuador’s agreement with Cuban doctors. The results have been catastrophic: Ecuador’s death rate is similar to Brazil’s, hospitals and morgues quickly reached capacity during the early phases of the pandemic, and international news broadcast tragic scenes of bodies left out on the streets.

Incidentally, the former presidents of all three of these countries were also targets of the emerging “lawfare” strategy, “the use of spurious legal action for political ends,” employed against left-wing or socialist leaders whose mandates counter neoliberal policies that privatize health care services, among other characteristics.

US politicians have accused the Cuban medical programs of being everything from human trafficking, slave labor, or communist propaganda. They refused entry to Cuban doctors in the wake of Hurricane Katrina, which caused almost 1,800 deaths, and refuse their help while COVID-19 ravages the country.  Canada also forbade the entry of Cuban doctors to respond to requests from First Nations groups struggling with COVID-19.

Even if the Cuban medical missions were entirely propagandistic, wouldn’t this be a beneficial form of international propaganda? It’s difficult to find the insidious aspect of providing medical aid to those in need. In this regard, Cuba’s efforts stand in stark contrast to those of the US and international organizations like the IMF and the World Bank, who provide “aid” in the form of loans, under conditions demanding the privatization of health care systems, which result in calamitous death tolls for recipient nations.

“The desire to feel useful, to feel that you saved a life,” Cuba’s Dr. Juan Jesus Ruiz replied when asked why he volunteered for medical missions. “Whenever I think that I’m probably not getting paid much, I don’t complain, I remember the faces of the people who were saved.”

Cuba’s “doctor diplomacy” should be recognized and applauded by the international community. Instead, under pressure from the world’s greatest military power, politicians across the Americas have been cowed into sacrificing the lives of their most vulnerable, while headlines are filled with stories about two US presidential candidates, both of whom promise to continue sanctions and attacks against Cuba’s altruistic medical programs.

Steve Lalla is a researcher, analyst and journalist. Follow him @steve_lalla