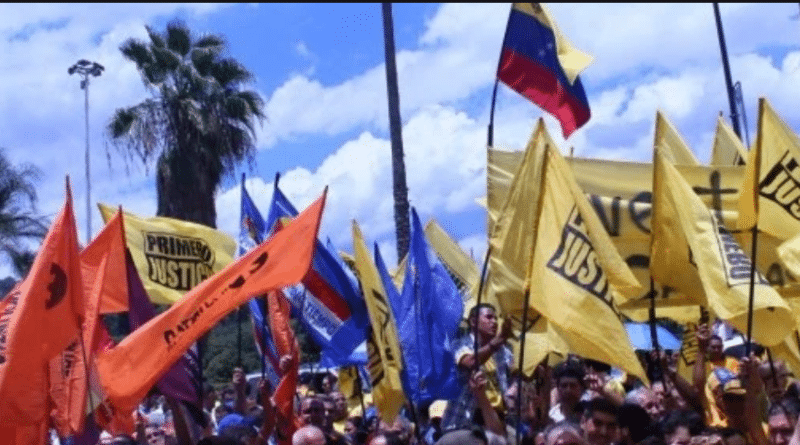 Everything indicates that Primero Justicia (PJ) and Voluntad Popular (VP) are locked in a brawl within the so-called G4 coalition supporting Juan Guaidó, made up of the aforementioned parties plus Acción Democrática (AD) and Un Nuevo Tiempo (UNT. The confrontation exists because the Primero Justicia demands, among other actions, the rotation of the “interim presidency” that Guaidó has exercised since January 2019 when he proclaimed himself “interim president” of Venezuela in a public plaza.

In mid-October, citing several leading sources within the G4, journalist Vladimir Villegas disclosed this information on Twitter, also stating that the proposal would have come from PJ, but, until that moment, the political organization had not achieved majority support from the operators of the anti-democratic wing of the opposition.

Villegas’ claims were denied almost immediately by leaders such as Henry Ramos Allup (AD), but on October 26 the journalist published images of the document that includes what he announced and that accounts, in his own words, “for the differences between Primero Justicia and Voluntad Popular, which every day increase with respect to the result and the course of the policy promoted by Guaidó.”

What is contained in the PJ document shared by Vladimir Villegas?

1) Get rid of Maduro

Throughout four pages, seven actions are required that the G4 should undertake to “get rid of Maduro”—the paramount goal of its effort—peppered with criticism and amendments to correct the course deviated from, according to them, during Guaido’s “presidency.”

In the opinion of the document’s authors, in Venezuela it’s necessary to “rebuild a political momentum of pressure,” without sparing time and resources, that would allow them “to induce a moment of force that would compromise Maduro,” for which, they point out, they must turn “the social crisis into a political crisis.”

The departure of the Bolivarian Government, in their opinion, could only occur if a political-military fracture takes place, for which it is essential to ally with other opposition leaders, such as Henri Falcón, María Corina Machado or Henrique Capriles Radonski. “It must be an inclusive unit seeking to link everyone within a common program,” they specify.

2) Rotation of positions, deadline and responsibilities within the “interim government”

The text indicates that “there must be a total rotation in all positions”—interim presidency, pseudo-chancellery and “Center of Government,” as of January 2021, following the methodology that was established when the opposition took control of the National Assembly in 2016.

In this regard, on the one hand it is argued that “it isn’t possible to extend the interim government and all its positions when its results have been total failure in the management of money and politics,” while on the other hand it argues that the absence of rotation is an obstacle in the reconstruction of “an internal force,” a goal that is declared of utmost “importance at this moment.”

3) Dissolution of the “interim government”

In the document, whose origins Vladimir Villegas attributes to Primero Justicia, it is categorically declared that the “interim government must disappear” and only the figure of the “interim presidency” (non-existent in the Venezuelan Magna Carta), who will serve “as international representative of the opposition,” and “as legal representative in any lawsuit” related to “assets” or “human rights issues.”

This proposal would be justified because, they reprimand, “since last year, the creation of a bureaucracy has become an end in itself,” resulting in a deviation from what the group considers to be “its reason for being”: to “get rid of Maduro.”

It is assumed that the future of this political group will depend on a negotiation with the Venezuelan government—which they call “the dictatorship”—and for this to have legitimacy, they emphasize that it will be essential to “formalize a single instance” of dialogue, even at the international level , due to the threat of “being displaced by actors like the one from the National Dialogue Table (opposition parties running in Parliamentary Elections).”

On the other hand, they inquire about the official position of the G4 regarding future electoral contests—regional and municipal elections, a recall referendum, and presidential elections—and in that sense, they ask whether they will divest themselves, or not, “from the electoral battle.”

In the text, it is also recognized that their way of “doing politics” in Venezuela does not align with the real needs, which point towards solving the problems that afflict the population “and not the interim government bureaucracy.”

For the management of the Republic’s assets abroad, the document released by Villegas proposes the creation of a trust that would hire “a group of independent managers of the best level” who would be in charge of, in addition to the management of these resources, the judicial processes.

In their opinion, they must separate “the management of the assets from the political realm” so that politicians can assume their role: “remove Maduro from power.”

Contrary to the thesis of “administrative continuity” wielded by Juan Guaidó and Henri Ramos Allup among others, the proposal attributed to Primero Justicia indicates that “the life of the National Assembly will not be prolonged,” since it ceases functions on January 5, 2021.

Instead, it is indicated that it would use “as a model, as a mirror” of the current parliament, “the structure of the National Assembly’s Delegate Commission”, which should be opened without prejudice to the presence of the G4, to civil society, so that it can function as the “center of political leadership for the entire opposition.”

The reason presented for supporting the extinction of the current legislature and the adoption of the aforementioned structure, rather than constitutional, is administrative: to totally control “how money is spent” within what survives of the “interim government.”

The text admits that during the “interim term” of Juan Guaidó, the opposition “has neglected the people and social organizations,” indispensable forces for transforming the social crisis into one of a political order that could force the exit of the current government.

For this reason, they suggest that “resources, time, focus and energy must be invested in reestablishing a strong political and social base, at the neighborhood, parish and municipal level.”

8) The most expensive transition in history: ending the waste of public funds

The last point addressed in the document about the alleged dispute between PJ and VP is related to the management of public funds and in this regard, it is required that no more money should be spent or requested from US frozen public funds, since they already requested $80 million, and it’s more than enough to finance opposition operations.

“$80 million is more than enough money, that’s almost the most expensive transition in the world. We exist in order to get rid of Maduro, not to handle funds,” they conclude.

“If this in not a manual for conspiracy, you tell me what it is,” expressed a political analyst to Orinoco Tribune. “Imagine that the democratic party in the US made public a document of this nature alluding to the ouster of Donald Trump, what would the law enforcement in the United States do?”