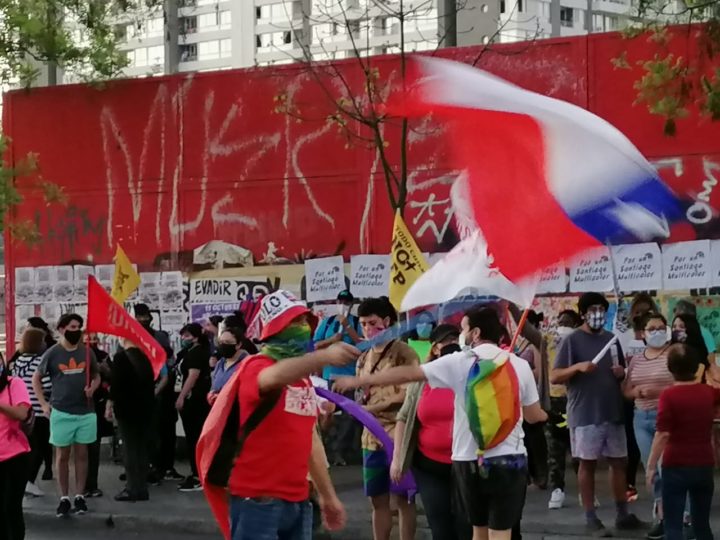 Only three days have passed since the plebiscite by which the Chilean people wrenched a constitutional convention from the country’s elites. It is true that what would have been desirable would have been a constituent assembly that, from the very basis of society, would have drafted a new Constitution that would have sown democracy in the country after 47 years of dictatorship, direct during the first 17 and indirect administration of the same during the following 30.

Rivers of ink have flowed in these 72 hours. Having overcome the initial joy that is understandable in a country whose people for many years have been lacking in victories and where the traditional thing is to celebrate defeats, one returns to the ground to understand that (excuse the commonplace) “a battle has been won, not the war”.

How can we speak about the subject in an original way and not fall into repetition? I confess that I hesitated to do so, but I was overcome with emotion, because despite the remoteness, I perceive the effusiveness of a whole that made this day possible. But the emotion also manifests itself as indignation when we see how the perpetrators of the disaster that Chile has experienced in these 47 years now seek to take over victory by displacing its true protagonists.

In the drunkenness of a glorious day for the people, they are already beginning to seek to – once again – construct leadership agreements that prevent the popular organizations from electing their representatives, not as independents, because they must “depend” on the will of the sectors and territories that select them, and they must be accountable to them for their actions. The connotation “independent” has a political character to make it clear that they will not respond to the parties that cause so much pain to Chileans.

We must not lose our memory, some of those who are celebrating today issued clear opinions on the possibility of the constituent while they joyfully participated in the distribution of the booty. Let us consider some examples:

“I said that this Constitution passed the democratic test, and I stand by it! If you say that (…) the binominal is over, the discussion of the Constituent Assembly is over!” – Ricardo Lagos, former president of Chile.

“I would not want the issue of the Constituent Assembly to be a kind of drug. That is, that we start smoking opium in a fictitious scenario, non-existent, of an institutional crisis that does not exist, of a Constituent Assembly that will never be constituted.” – Camilo Escalona, ex-president of the Socialist Party of Chile.

See what they say now, after Sunday:

“It has taken 30 years for this moment to arrive” […] “The important thing is to understand that the proposals of this October 25 have been put forward by many of us for a long time”. – Ricardo Lagos

And this is what José Miguel Insulza said on Sunday in an interview with an Argentine press agency: “…the need to reform the Constitution that emerged from Sunday’s plebiscite is the key to begin building a more democratic and less unequal country”.

They despise the people, they think they are ignorant and stupid. Even President Piñera assumed as his own the great majority achieved. He immediately gave order to the official sector to leave aside the divisions and to advance towards “the Constitution we want for Chile”. He added that it was necessary to work so that the issues that will be contained in the new Charter are won by the necessary two-thirds, asserting that this “will depend a lot on the attitude that the Chile Vamos [government coalition] will have, in order to avoid returning to those three thirds and to be able to have a country that assures all its children a horizon, a long view, and greater stability”. He was referring to the historical balance in Chile between left, right, and ultra-right, which allowed the status quo to be maintained until 1973 and was broken by Pinochet, the armed forces, the fascist right, and the Christian democracy that promoted and executed the coup d’état.

In a long article by the journalist Camilo Villa J. published in La Radio de la Universidad de Chile on Tuesday 27th, it was pointed out with ample evidence how the leadership agreements between sectors of the left, right and pseudo-left are becoming visible.

For practical purposes of the April 11 elections, discussion of the government and opposition is still an entelechy. That number of approximately 78% of citizens who expressed themselves in favor of a new constitution means nothing in terms of quality. It is known that the right wing that is in government, the right wing in the opposition and the Frenteamplista opportunism agreed on November 15 that an original constituent assembly could not be held as it was and as the popular desire is. It is very probable that this quality will be manifested at the moment of drawing up the new Magna Carta; that is why the real “mother of all battles” will be the one that will be released by April 11.

It is necessary to remember how the Chilean political system brought forth the MAPU in the moment prior to the electoral victory of Salvador Allende and when it was clear that this could happen; the PPD in times of clear dictatorial retreat; and the Frente Amplio when it was evident that the struggles of the Chilean people would reach victory on October 25. All these political organizations were created with the same mission: to slow down, paralyze and torpedo from within the great struggles and popular victories. Today, the leaders of the MAPU and the PPD are part of the political caste bought by the business right, and the Frente Amplio, was the manager – together with the right wing that they supposedly oppose – of the November 15 coup d’état.

Jacqueline Van Rysselberghe, of the Pinochet party Independent Democratic Union (UDI), who defended the continuity of the constitution by calling for a vote in favor of “Rejection” immediately called for work to be done “so that the constitutional change does not begin from zero”.

The agreements of the opposition leaderships matter little today, any of them that are reached will once again be to fool the people. From a historical point of view, it is about the impossible mission of uniting those who promoted the coup d’état, with those who fought against the dictatorship, those who catalogued the Allende government as authoritarian and those who have enjoyed thirty years of the Constitution that they now say they want to change.

In the closest scrutiny, the same people who mocked the people on November 15 intend to unite with those who in the streets forced them to seek an alternative that would avoid a total defeat of the system. The ghost of ’88 is once again present.

Villa’s own article lists the movements of leaders who meet without consulting the people. In this context, the only reflective voice seemed to be that of Alondra Arellano, president of Convergencia Social, who in an interview with the University of Chile Radio, made an unusual show of wisdom and explained that: “the role of the opposition will be to take away the protagonism and give it to the social and independent movements”.

While this is happening among Chileans, the Mapuche, the other people who inhabit the country, are generating their own dynamic of struggle to determine the number of seats that should correspond to them in the constitutional debates that will finally lead to their recognition, by fact and by right, according to the stipulations of Convention 169 of the International Labor Organization.

The problem is that this debate takes place within the framework of the Senate’s constitution commission, made up of two parliamentarians from the right wing of the government, two from the right wing opposition, and an independent (former Christian Democrat) with the presence of two ministers from Piñera.

The biggest outburst of honesty -although it seems incredible- came from Tomás Fuentes, a deputy from the right-wing National Renewal party, who stated that: “The design of the constituent was made so that no independent would be elected”. He said that this was impossible unless the candidate was a well-known athlete or a member of the entertainment industry, for which he gave two examples.

In his interesting explanation of the situation created after Sunday’s election event, Fuentes explained that if the candidates to be elected on April 11 are the same politicians as always (he gave the example of two of them, one from the government and one from the opposition) “…we are going to face a year with the same politicians that are in Congress today, won’t there be an equal amount of frustration among the people? I imagine that if we make an honest diagnosis of what happened in the plebiscite, the 17 political parties that are represented in parliament today will turn their heads to look for candidates with a profile as close as possible to that of ordinary citizens.

Congressman Fuentes explained that if separate opposition and government lists were created, there would be an “over-representation”. In light of this, his surprising proposal was: “…if we make an effort and manage to put together a list for ourselves to benefit from that union, all we need is to have a program of common minimums. If the left is not united and we are, we [referring to government forces] will be the ones who are over-represented. I believe that efforts must be made […] for a common project”. Here is the “mother” of all the agreements of the Summit, which is to repeat the alliance that decided the November 15 pact, and now to elect the Convention members and eventually write the new Constitution, which would be nothing more than the same as that of Pinochet and Jaime Guzmán, but now approved democratically.

While these “weavings” are taking place in the superstructure, the people organized in Social Unity have specifically called for preventing the parties from taking over the constitutional process. As they have explained, “they will continue to carry out citizens’ town halls whose objective is to provide input to the constituent body when it comes to considering the issues that should be contained in a new Fundamental Charter”.

The confidence in the popular organization and the intelligence of the citizens who have sustained this movement for a year will find the paths to resolve this intrigue and win the new battle. On Monday night, I watched an interesting television program on Channel 8 in Peñalolén in which popular leaders debated the way forward. With joy I noted the popular wisdom and the certainty that with their “feet on the ground” the people, the organizations and their leaders have a perfect appreciation of the present moment after Sunday, the difficulties that emanate from the tasks to come and the paths to follow.

Listening to that program, I remembered that beautiful page in Chile’s history when, in March 1818, after the Cancha Rayada disaster that resulted in a major defeat of the patriotic forces, chaos was generated, a state of supreme panic and confusion, and rumors were fanned, contradictory and pernicious news that even announced the death of San Martín and O’Higgins.

And when fear and pessimism took hold, especially among the upper sectors of the population, some of whom rushed again to change sides, the supreme conviction of Manuel Rodríguez emerged, whose moral authority was recognized by the population when from the balcony of the government palace he proclaimed in the midst of the generalized discouragement “We still have a homeland, citizens!”.

I have no doubt that the new Rhode Islanders of the 21st century will recover their homeland for themselves and for future generations.