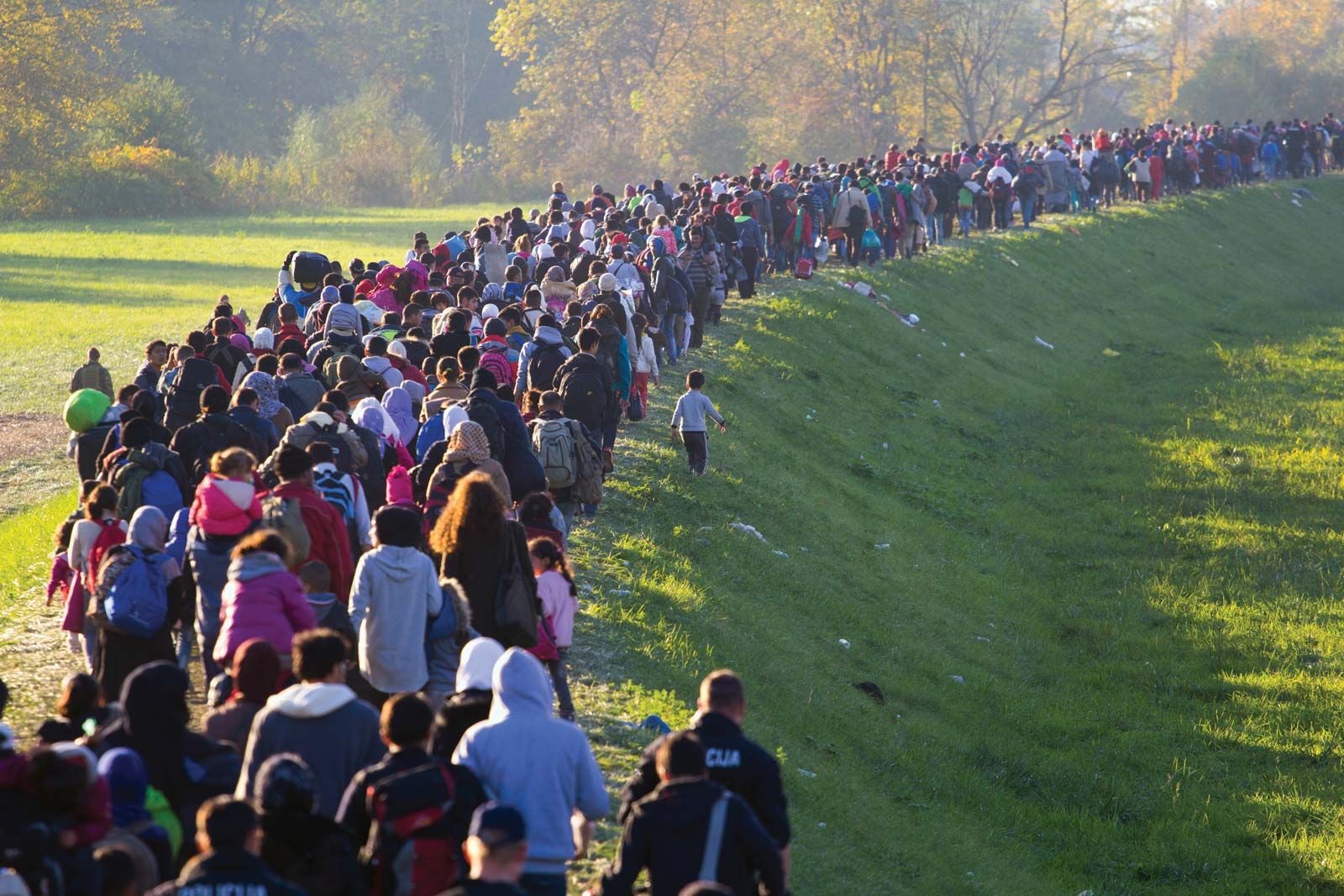 Second-class citizens, the 272 million migrants worldwide, fuel passions and stir up xenophobic discourses with electoral calculations in much of the planetary geography.

They make up a sector highly vulnerable to the health, economic and social impacts of the current pandemic. At the same time, because of their contribution to the economy and employment, they constitute an important – sometimes essential – springboard for integral economic recovery.

This is, in any case, the understanding of the United Nations. In particular, its Program for Human Development (UNDP), which on October 21 published a report analyzing migration in the last decade.

Human Mobility, Shared Opportunities: An Analysis of the 2009 Human Development Report and the Way Forward examines major past trends and, at the same time, looks ahead to future avenues to facilitate safe, orderly and regular migration.

Behind the numbers, charts and analyses, certain myths linked to migration have been dispelled. Migration remains a subject of major civilizational relevance, permeated by political rhetoric, and has become a scarecrow in the global societal debate.

With very strong symbolic expressions, such as the construction of the wall between the United States and Mexico or the ‘security barrier’ installed by the European Union in the waters of the Mediterranean or the permanent blackmail of Turkey towards the European Union, as it holds in its hands a giant migratory master key.

Some of these myths are repeated ad nauseam by many media outlets and a significant sector of the political class and power. That world migration is quantitatively uncontrollable at the planetary level; that it is a population that takes advantage of the richer countries where it is headed; that the impact of refugees – a tiny part of that human group – threatens the internal peace of the most stable regions of the planet.

The International Organization for Migration (IOM) estimates in its 2020 Report the existence of some 272 million international migrants, a figure that represents only 3.5% of the world’s population.

The trend is growing. The current figures exceed the projections made for 2050, which predicted 2.6%, or 230 million international migrants, just within three decades. However, the percentages are still minimal in the global demographic framework.

As the IOM argues, the scale and pace of international migration are very difficult to predict accurately because they are closely linked to one-off or time-bound events, such as situations of serious instability, economic crisis or conflict. In addition to the impact of long-term trends, which also have a major impact: demographic changes, differing regional economic development, advances in communications technology and access to transportation.

In terms of geographical coordinates, India remains the main country of origin of international migrants (17.5 million). The second most important is Mexico with 11.8 million and China is in third place with just over 10 million. If we analyze the destination, the United States maintains first place, capturing more than 50 million international migrants.

Three quarters of the 272 million -52% men and 48% women- are between 20 and 64 years old and constitute a potentially active labor force.

International remittances from this migratory movement amounted to US$ 689 billion in 2018. They end up in countless countries. The three main recipients are India, China and Mexico. However, in entire regions, such as Central America and the Caribbean or sub-Saharan Africa, the economic impact of remittances impacts the very survival of many families or communities. For Haiti they represent 37.1 % of the Gross Domestic Product (GDP). For Honduras, 22 %; El Salvador, 21 %; Jamaica, 16 %; Nicaragua and Guatemala, 13.1 %. The World Bank estimates that in 2019, Latin America and the Caribbean together received US$96 billion in transfers sent by migrants.

According to the recent report of the United Nations Human Development Programme (UNDP), forced migration – internally displaced persons and refugees – although it has doubled in the last 10 years, currently accounts for some 79 million people. This is a small minority in the context of the global migratory movement as a whole.

The xenophobic discourse of enormous international media impact underlines the “opportunism”, if not “leisure”, of migrants arriving in high or medium development countries. When this discourse is imbued with racial components, as in Europe with immigrants from sub-Saharan Africa or Arab countries, the cocktail is socially explosive, discriminatory and racist.

However, “well managed, human mobility drives economic growth, reduces inequities and connects diverse societies,” the new UNDP report stresses, demystifying some of the disqualifying arguments. And it underlines that “although they only represent 3.5% of the world’s population, migrants generated 9% of the world’s GDP in 2015”.

Other studies by international institutions such as the World Bank or the International Monetary Fund, cited by the UNDP in its report, “show that a percentage increase in the proportion of migrants in high-income countries increases per capita income by 2%. And it anticipates that “if immigrants increased the labor force in rich countries by 3%, the world’s Gross Domestic Product would increase by $356 billion by 2025.

Looking back, the UNDP acknowledges that since 2009 little progress has been made in addressing the mobility of low-skilled migrants. The rights of migrants are better protected on paper, but in most countries their access to social protection and services remains limited. And transaction costs for documents, travel and cash transfers remain stubbornly high.

The global health crisis should not be a factor in further closing borders. In presenting the study, Asako Okai, Assistant Administrator and Director of UNDP’s Crisis Office emphasizes that “healthy economies and societies depend on human mobility. COVID-19’s recovery efforts must include migrants, ensuring that their rights are not marginalized and that their contribution is not wasted.

“No one is safe until everyone is safe,” emphasizes the report’s technical summary, implying the need for “an inclusive response” that integrates migrants.

Human mobility, shared opportunities does not end with the diagnosis, but proposes concrete steps to value and dignify migration.

It recommends making and implementing certain international political decisions. Among them: to expand legal routes, to reduce the transaction costs of remittances, to guarantee the rights of migrants, especially for women, to promote integration and social cohesion, and to mobilize diasporas.

It concludes that “the pandemic and the pause in travel are an opportunity to redefine human mobility and build a better world. UNDP Administrator Achim Steiner, presenting the new report on Migration 2020, said that “promoting the benefits, reducing the costs and making migration an option will prepare us today to meet the new challenges posed by climate change, growing inequity and the digital transformation of tomorrow’s work”.

The 2008 global economic crisis was followed by a decade of highly politicized debate, some progress, and many missed opportunities regarding human mobility, Steiner emphasized. We must redouble our efforts now and focus on progress over the next ten years if we are to achieve the Sustainable Development Goals,” he emphasized.

UNDP anticipates, for the future, new approaches to enhance the benefits of human mobility, both for migrants and their families, and for countries of origin and destination. They go in the direction of expanding legal migration routes, digital innovations to help people make a living while in transit, a renewed focus on social protection, and the involvement of diasporas in home country policies.

The almost daily images define the planetary scenario. Central American migrants trying to reach the United States via Mexico. Or the barges full of African men, women and children knocking on Europe’s doors – last year alone 1,283 died on the crossing while 110,000 managed to enter the Old World. What the media spotlight conceals, however, is what is essential: the enormous contribution of migrant workers to the economies of the central countries, as well as the effect of intercultural oxygenation that is essential for the rich and aging opulent societies.