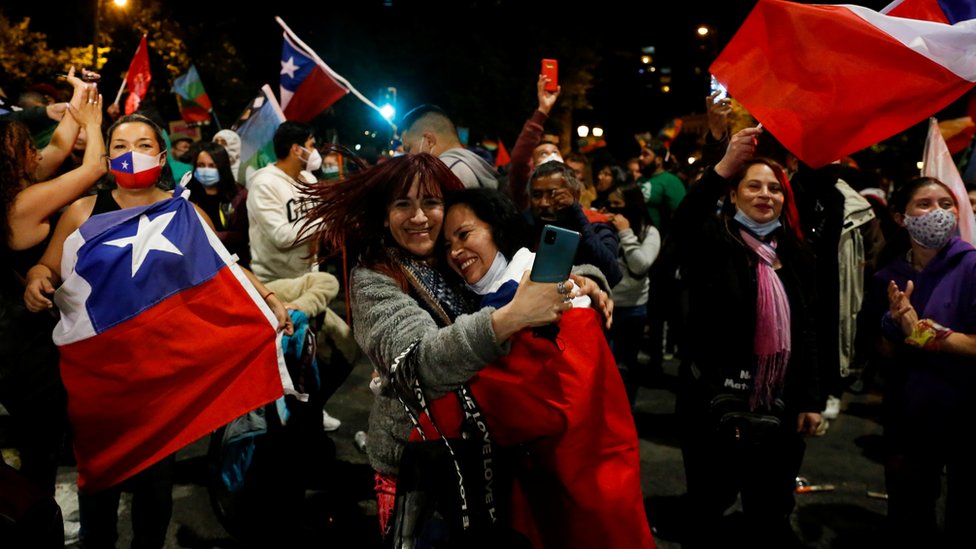 Celebrations for Chile after constitution vote

On Sunday, Chile faced a historic and unprecedented challenge: its people were asked for the first time in their history whether or not they wanted a new Constitution and, if the answer was affirmative, what kind of body should be in charge of drafting the new Magna Carta. There were two alternatives: either a “Constitutional Convention” comprised of 155 people exclusively elected for this purpose and which, once the process was completed, would be dissolved or, otherwise, a “Mixed Convention” comprised of 172 members, 50 percent of whom would be parliamentarians and the remaining 50 percent would be citizens also elected for this sole purpose.

This consultation was by no means an amusing concession by the post-Pinochette political caste, but rather the corollary of a long process of popular struggles that reached its peak in the days that began on October 18, 2019. These struggles destroyed the fantasy image of the “Chilean model”, that supposedly virtuous paradigm of democratic transition and economic success that was unscrupulously and relentlessly promoted by the dominant interests and the empire. The protests tore apart the dense web of official lies in the blink of an eye, exposing a country with one of the highest rates of economic inequality in the world, with the most indebted households in Latin America and the Caribbean, with a social security system that for more than forty years swindled retirees and pensioners, and a country in which research shows that women who are born in the popular communes of Greater Santiago have a life expectancy of 18 years less than those lucky enough to be born in Providencia, Vitacura or Las Condes. “Chile is the center of injustice”, sang Violeta Parra in the mid-sixties, at a time when the country had not reached the unimaginable extremes it had reached thanks to Pinochet and its successors.

The resistance and struggle never ceased, and reached an accumulative inertia that produced the social explosion of October. From the deep underground of Chile the truth burst forth that the dictator and the protagonists of the failed “democratic transition” tried to hide. No one was more eloquent than President Sebastián Piñera’s wife in describing what was happening in the country when, in anguish, she confessed to a friend that “we are absolutely overwhelmed, it’s like a foreign, alien invasion”. Her reaction is understandable: those tense faces fed up with so much oppression and injustice, those bodies that heroically opposed the criminal shootings by the security forces, had been invisible for almost half a century and for the dominant culture were “aliens,” a threatening populace that came to disturb the comfortable existence of the owners of the country and its wealth. And, after the results of the plebiscite it seems that the “invaders” do not want to return to the past. They want to build a new constitutional order that will give them back the rights that were violated by resorting to trickery and the bad arts of political propaganda perversely administered by the media hitmen, with El Mercurio at the head.

The result of the plebiscite is categorical and unappealable. After a very hard birth, Chilean society resumes its transition to democracy. The new Constitution will dismantle the complex and intricate web of privileges and authoritarian enclaves established over half a century, and for that it will be indispensable that the masses maintain their presence in the streets and squares. Their demobilization or retreat to the quietism that preceded the events of October would be fatal. The writing of a new Constitution, a delicate process of preparation, will be only the first step in the long march towards Chile’s return to democracy, brutally shattered by the 1973 coup and only reconstructed in its external appearances during the long thirty years of right-wing governments of old and new times. Salud Chile, all of Latin America embraces you with joy and hope!