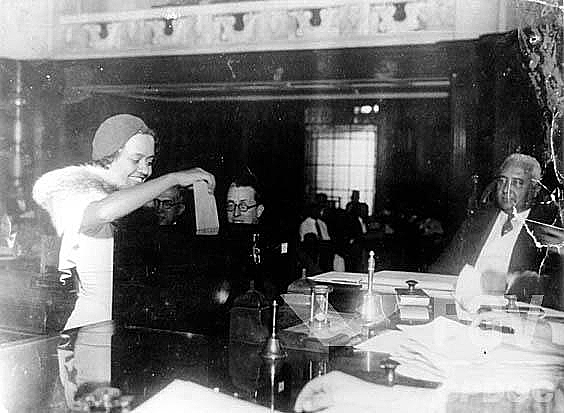 “What I can affirm is that my wife will not be voting”. This 1891 declaration from parliamentarian Coelho Campos, set the tone for the political viewpoints that impeded Brazil from being the first nation in the world to allow women to vote. On the occasion, the country was elaborating its first Constitution and the possibility of women’s suffrage had the support of 31 constituents. However, when it came to a vote, the pressure was too great and the idea did not move forward.

It was only in 1932, more than four decades later, that women’s right to vote became a reality. Even then, only literate and employed women were allowed to exercise that right. From that time till now, it would not be exaggeration to claim that things have backtracked when it comes to female inclusion in Brazilian politics. For example, in Latin America, the country ranks 9th out of 11 on the United Nations index of women’s rights and political representation, published in September by the U.N Development Program (UNDP) and U.N Women, with support from the IDEA International organization.

The Atenea Report analyzed 40 factors, divided into themes that range from working conditions to participation in political parties and the right to vote. Each aspect was scored from 0 to 100. Among Latin American Nations, Brazil was in the anti-penultimate spot, with 39.5 points. In the global ranking it placed behind nations like Ethiopia, East Timor and Saudi Arabia.

The difficulties in changing this scenario are varied, from a lack of legislation that forces parties to be more equitable, to resistance on the part of those in power to give up their hold. Including its diverse facets into society, the economy or politics, has never been one of Brazil’s fortes. When it comes to women’s representation in politics, parties had no obligation to invest in female candidates till 2018.

In March of that year, the Federal Supreme Court (STF) voted to implement the Direct Unconstitutionality Act (ADI) 5617, that deemed unconstitutional the 15% requirement political parties had for allocating funds to female candidates. In the view of the STF, that percentage should be at least 30%.

According to Lígia Fabris, lawyer and professor at the Getúlio Vargas Foundation (FGV), Brazil’s situation is shameful. She says that after the STF decision there was an increase in women’s participation in politics, but not enough to make up for the almost one hundred year lag regarding the matter.

“They changed the law about investments in female candidacies, but there are a lot of other factors that need to be looked at, including seeing if we can be certain that these funds are actually getting to the hands of female candidates. If we have 30% female candidates running, and they are receiving 30% of the funds, we can expect that 30% of those elected will be women. We don’t have half of that”, affirmed the lawyer.

The first major obstacle is fraudulent candidacies, that seek to circumvent the 30% quota for women. Parties will reserve the space for female candidates only nominally, a way of pretending to obey the law. There are also discrepancies with the distribution of funds, that many times are illegally funneled out of campaigns headed by women in order to finance those led by men.

Reactions to the quota laws are also permeated with backwardness. Last year, bills proposing an end to these incentives were debated in Congress. “It’s as if political parties said: if we really have to to do this, we are not interested”, explained Fabris. In her opinion, this rhetoric is accompanied by the narrative that “women are not interested in politics, that parties would have to fabricate fraudulent candidacies because there would not be enough women interested in running, enabling them to adhere to the law”.

The bills that went before Congress in 2019, in reaction to measures that assure female representation in politics, have much of the same nature of past boycotts. In 1891, when Brazil wrote it’s first Constitution and had the opportunity to install voting rights for women, conservative pressure was so great that some parliamentarians had to abandon their support for initiative. In the years that followed, new attempts at giving women the right to vote were also buried. In 1894, the Constitution of the city of Santos, in the state of São Paulo, gave voting rights to literate and employed women. A group of citizens filed a motion in the state Legislature and defeated the proposal.

In 1917, an amendment was put before Congress altering election laws to include women. The motion was rejected by the Justice Commission. In the words of the head of the commission, Afrânio de Mello Franco, “Brazilian women themselves, for the most part, would choose not exercise the right to vote, even if that right was given to them”.

In 1928, the state of Rio Grande do Norte allowed women to participate in elections. However, the Senate filled a legal requirement that annulled women’s votes, alleging a lack of legislation regarding the issue. The conclusive legislation allowing women to vote that came into effect, was presented in 1930, but was again delayed, due to the suspension of parliamentary activities during the Revolution of 1930, that ended the so called First Republic (1889-1930), and led Getúlio Vargas (1882-1954) to the presidency.

The bill was finally approved only in 1932 by Vargas himself, but participation was optional. Mandatory voting only came about in 1934, yet still permitted only for literate and employed women. Among the jurists that created the new electoral code, was notorious militant Bertha Luz (1894-1976).

The story of Almerinda Gama

During the four decades between the first Congressional discussions about the women’s voting rights (1891) and the legal implementation of those rights (1932), Brazil had time to formulate various movements, collectives and feminist entities that fought for suffrage. However, the inconsistencies in this inclusion, in certain ways influence the insufficient levels of progress we see till this day.

The fight for female political representation was permeated by the historical context of exclusion in the country. The movement was comprised of white women, with better financial means and access to education.

The story of black lawyer Almerinda gama, serves well to illustrate this scenario. Elected as a union representative to the 1934 Congress, Gama was one of two women, alongside Carlota Pereira de Queirós, that made up the Assembly comprised of themselves and 252 men. A pioneer, Almeida rarely appears in documents and texts about the subject. Although the cover photo for this piece, of the militant voting in Congress was iconic for decades, her name is almost never mentioned.

Having been born in the state of Alagoas and later migrating to the city of Rio de Janeiro as an adult, Almerinda was the daughter of a white man and a black woman, who was raised by her paternal family, in the midst of educated women.

Upon moving to Rio, she began attending meetings hosted by Bertha Luz at the Brazilian Federation for Women’s Progress. This was the most prominent of these entities at the time, and fundamental in many of the feminist movement’s achievements. The group, made up of upper middle class white women, represented a different life experience from that of Almerinda Gama. While she acted in the communications department of the Federation, she was going to Law School, writing for newspapers, translating and working as a typewriter.

In the years that ensued, she stayed in the political struggle, but distanced herself from the feminist movement, making labor issues ever more present in her militancy.

“She stepped away from the women’s movement. There are some letters she wrote in which class conflicts become evident. They came from different realities. The Federation wouldn’t support certain causes that were dear to Almerinda, making her to distance herself”, says journalist and historian Cibele Tenório.

Tenório becomes emotional when commenting on the photo of Almerinda casting a vote. “This photo was taken at the Tiradentes Palace, which housed the National Congress before it moved to Brasília. Today, the Palace is home to the Rio de Janeiro City Council. It is from that hall that Marielle Franco says ‘I will not be interrupted’. When we say it’s been a long road to get to this point, something Marielle spoke a lot about, we see that Marielle existed only because Benedita da Silva (Rio’s first black and female mayor) existed, and Benedita da Silva exists only because Almerinda existed”, concluded the historian.

The obstacle of violence

The rise of political violence in Brazil, notably over the last few years, also afflicts women disproportionately. In some aspects, they are the biggest victims. A study done the Land of Rights and Global Justice NGOs, published last September, mapped instances of political violence between 2016 and 2020, finding that women were the targets of theses offenses in 76% of the cases.

The study also concludes that there is a shift in the political configuration of Brazil favoring conservatives, beginning in 2018. It is a tactic used to dismantle the progress achieved democratically through the years. In the day to day lives of women in politics, this violence manifests in many different forms.

Rayssa Tomaz, Green Party director and militant for the last ten years, recounts that these challenges present themselves systematically for women. “The machismo imbued in our life trajectories have substantial impacts when it comes to politics. When we think of candidates, it is very common for us to imagine a white, conservative, successful male”, she analyzes.

Rayssa’s personal and professional experiences bear semblance to situations most women have gone through in society as a whole. She highlights that when working in managing roles, she still has to deal with being under valued and questioned daily.

“Political live demands a sort of dedication that is many times at odds with the opportunities we are given and the roles society imposes on women. No one ever asks where the children of a male candidate are. When we have have so many roles in society, having a political one is yet another activity to add to an already extenuating day to day life”, she explains.

In an article analyzing violence against women as a barrier to the formulation of female political platforms, the militant uses her own life as an example. The text narrates how she suffered and attempted femicide in 2017. “Writing this is a way to enhance the sensitivities of other sisters in the political sphere, and more importantly, the male comrades who take on this mission as part of their life paths, so that we may together become more effective in assuring equality for all”, stated the politician.

These conclusions could be applied to society as a whole, given the high likelihood women in Brazil have of being victims of violence. “There are no guarantees for our physical integrity, much less our emotional one. Fear also keeps us alive. The fear that something may happen to us, or to our children, or to so many others. Today, fear is my biggest driving factor”, conclude Rayssa Tomaz.