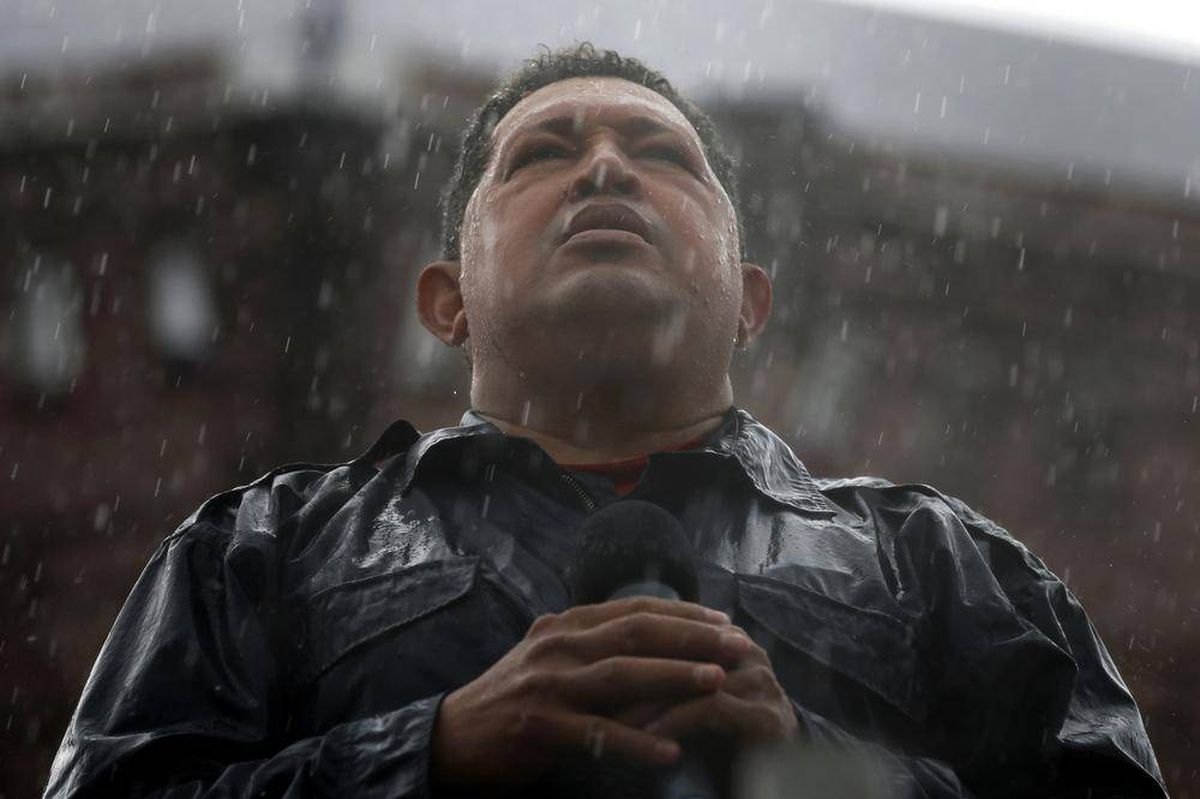 The history of humanity has had an endless number of proposals about what the concept of justice in human relations means. This determines the meaning of society. When Aristotle defined the human being as a political animal -politikon zion- he did so by attributing to him the quality of reason -logos-, which in turn made it possible to differentiate: the advantageous from the harmful, and therefore also the just from the unjust. This elementary dissertation is the basis of politics as an exercise in debate for the construction of society.

The communities approach the idea of justice and define the elements that support the principles for the relations between its members. Thus we see how modern liberal society establishes as an axiological value the freedom of individuals regarding property and accumulation, even though the unlimited and unavoidable vocation of this principle is detrimental to the rest of society. This is one way of seeing the world, but not the only one.

The Bolivarian Revolution recognizes itself in the sense of equality and protection of the great majorities, in the need to fight against the voracity of capitalism (which in turn diminishes the dignity of those who do not belong to the small group that inhabits the summit of the sacrosanct market). This vision, we assume as a national political body, represented in the thought and action of one man: Hugo Chávez. The Commander’s dedication, his thought and political exercise, allow us to clearly appropriate this idea. The theoretical and idealistic abstraction is materialized in a concrete human being with values and actions that do not deviate even one millimeter from their purpose. Coherently consistent.

October, in the global revolutionary thought, offers us the possibility of remembering the dialogical relationship between the idea and the man. For the Venezuelan people of today, October illuminates us with the popular victory of Comandante Chávez in the year 2012 and his heroic electoral campaign, in spite of suffering from his supervening illness. This epic effort to maintain the protection of peace and sovereignty of his Homeland, was captured in the photographs of that unforgettable closing of the campaign under a torrential rain on October 4 of that year.

Since the beginning of the 20th century, with each October, we evoke, on the one hand, the transcendental moment that placed as a reality the possibility of a government of the great majorities: the Bolshevik Revolution under the command of Vladimir Ilyich Ulyanov (Lenin). And in the dimension of the individual – strength, every 08 of this month we remember the deed of the new Latin American man. Ernesto Che Guevara embodies the main virtues and feelings that materialize the revolutionary dream in Our America.

On October 25, 1917 – according to the Julian calendar in force in Russia for that time, November 7 in the Western temporal logic – the Bolshevik Revolution led by Lenin achieved, through a difficult struggle by the subordinate classes, to come to power and consolidate the first government contrary to the bourgeois liberal hegemonic logic. The victory of the Soviets and the Russian people placed on the world stage a new way of viewing the government and, especially, the distribution of resources that constituted the general wealth of the nation: the core of the class struggle. Lenin placed the debate in practical terms, in the control over the means of production that generates goods, services and wealth for the whole country. The Soviet leader fought against the naturalized idea that the bourgeoisie should lead the state and the economy, because only its members are capable of doing so. Thus a new form of approach to public affairs arose, which implied a self-recognition of the people and the working class as guarantors of a new disposition in society. Lenin tells us:

“One of the most important tasks, if not the most important, of the present hour consists in developing as much as possible that free initiative of the workers and all the working and exploited in their creative work of organization. The old absurd, savage, infamous and hateful prejudice, according to which only the so-called upper classes, only the rich or those who have gone through the school of the rich, can administer the State, lead, in the field of organization, the construction of socialist society, must be undone at all costs (…) It is necessary to fight against the old custom of considering the measure of labor and the means of production from the point of view of the enslaved man who asks himself how he can free himself from an additional burden, how he can take something away from the bourgeoisie. The advanced and conscious workers have already begun this struggle and are responding vigorously to the upstart elements, who have come to the factories in particularly large numbers during the war, and who would like to treat the factory, which belongs to the people, which is already the property of the people, as before, solely on the criterion of making the best profit and leaving. How much there is of consciousness, honesty and reflection among the peasants and the working masses that will rise up in that struggle at the side of the advanced workers”.

We can criticize many processes, policies and deviations of the superstructure of the USSR, but it would be absurd to deny that its proposal of political and social construction was directed to the heart of the needs of the great majorities. This is not propaganda. If a rigorous revision of the indicators that reflect human welfare is made, it becomes evident that the life expectancy of its citizens was always above the world average, in that sense it can be seen that infant deaths decreased, and the average height of its inhabitants increased; In terms of education, illiteracy levels were reduced, increasing the levels of the educated population; in terms of food, the per capita caloric and protein intake was much higher than the statistics presented by the Western Bloc, and finally, inequality levels were reduced, and the distribution of wealth was much more equitable among its inhabitants. In order to review in depth these elements that we outlined briefly, we recommend reviewing the following work on ‘The Standard of Living in the Soviet Union’.

These unquestionable facts are configured as a threat to the capitalist system that operates from the opposite path: it watches over the interests of the most powerful, it strengthens the system of inequality by justifying it through the pernicious idea of social Darwinism, it promotes disproportionate accumulation, generating hunger and misery for the great majorities of society, it treats sectors fundamental to life such as health, education and food as a commodity, among a long etcetera of barbarities that deny humanity in favor of the market. Capitalism is the Cain of human brotherhood.

The response of capitalism and the Western hegemonic bloc was and is to attack the counter model through lies, disinformation and insidious propaganda about the insistent and evident search for justice in that incipient socialist experience. The entire imperialist communication system -cinema, television, press, public opinion- was placed at the service of the discrediting of an alternative that sought a more just world, based on a conscious and supportive human being. Half truths, the elaboration of disproportionate myths, the falsification of data, are daily exercises in the corporate factory of the capitalist media. The collapse of the Soviet bloc, as a consequence of its own mistakes and the confrontation in the competitive terrain of the enemy during the Cold War, did not stop the machinery of defamation, which has continued to this day. The idea of a world of equality among all human beings terrifies the holders of world capital.

Another milestone in October rests on Ernesto de la Serna, as a point of reference for dignity and coherence between word and action. When Fidel Castro proposed him as an archetype and example of the new man, he did not do so lightly. His thesis was supported by a righteous and consequential life. His spirit of struggle and sacrifice is the model for all of us who seek to build a more just world of equality and happiness. It is the other dimension of the revolutionary utopia, the one that takes as reference the emulation of a subject that embodies its main virtues.

If there is something that characterizes Che, it is his unwavering commitment and constancy for the revolutionary cause. In Ignacio Ramonet’s book, “100 Hours with Fidel, the leader of the Cuban Revolution, friend, chief and comrade of Ernesto”, reflected that quality that led him to face any task, even if it was impossible for him. He recalls a preparation exercise they did in Mexico when they were training for guerrilla action, which consisted in climbing to the top of Popocatepetl, at more than five thousand meters of altitude with perpetual snow. Che was asthmatic and that mission was unreachable for his body. This is how Fidel relates it:

His assassination in the Bolivian jungle was produced from the laboratories of the CIA as a weapon of deterrence against the revolutionary fever that was spreading through the Latin American landscape. Once again an infamy against the image of the heroic guerrilla appeared, attempting to undermine his subversive and unpolluted image with the most intemperate arguments alienated from the truth. But as Che said: “Wherever death surprises us, it is welcome as long as our war cry has been heard”. The effect was totally the opposite, the sacrifice and incorruptible image of Che became a path of reaffirmation of the conviction of Latin American peoples in the search for justice and equality. His speeches of inextinguishable fire for the dignity of the peoples, the example of coherence between his word and action, are part of the liberation traditions of the continent, it is part of the fuel that sustains our struggle.

For the Bolivarian Revolution and the universal liberation processes, October is a time of reflection and celebration of hope. The socialist projects of the 21st century must define the future. The deterministic effort of liberalism to put an end to the evolution of human consciousness is useless. It is not only that not everything has been said, but rather that almost everything has yet to be said and created in the new humanity, that of the new women and men that Che dreamed of. Today a profound change of era is emerging. It will depend on the outcome of this stage of the struggle between oppression and liberation, humanity and corporations, the flower and the nuclear weapon, life and death, the smile and nothingness. The class struggle, like time, does not end, at least not yet. To paraphrase the Liberator: we expect much from that definitive fight and its times: its immense womb, full of virtuous contradictions, contains more hopes and victories to come, than past events and defeats; and we are sure that its future prodigies should be far superior to those of the past. We shall always prevail!”