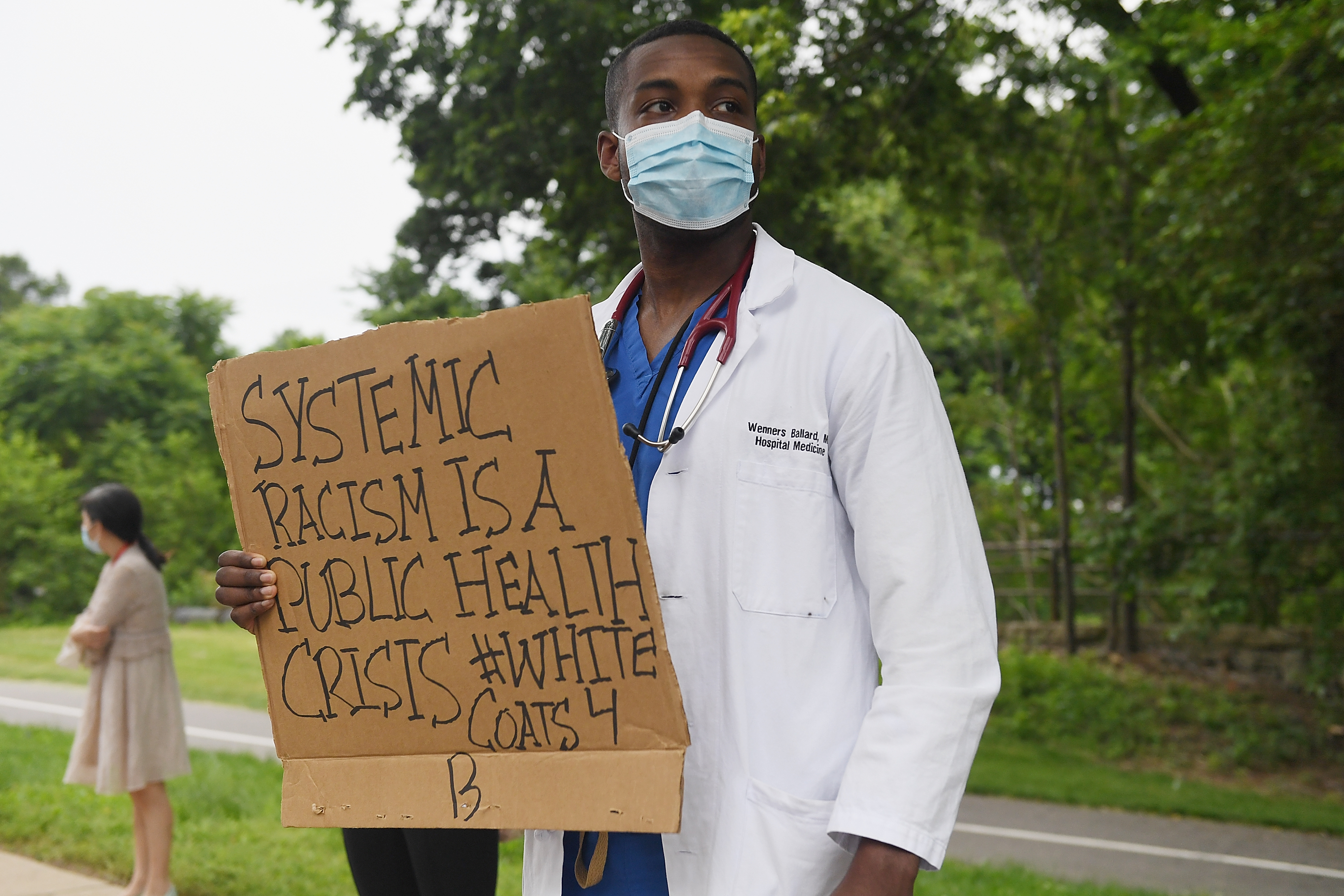 We can disentangle care from capitalism by increasing community-generated and community-led models of caring.

“State violence radically and derogatorily compromise the health and well- being of pregnant, laboring, and post-partum people and families.”

In this feature, we ask organizers and academics to reflect on the connections between health justice and Black liberation. This week’s contributor is Dána-Ain Davis . Dr. Davis is Professor of Urban Studies at Queens College.

Gwendolyn Wallace and Roberto Sirvent: Can you please tell readers of the Black Agenda Report  a little about your background and the work you do around health justice?

Dána-Ain Davis: My name is Dána-Ain Davis, professor of Urban Studies at Queens College and serve on the faculty of the PhD Programs in Anthropology and Critical Psychology at the Graduate Center, City University of New York. I’m also director of the Center for the Study of Women and Society at the Graduate Center.  I am, first and foremost, a pracademic – one whose practice of justice precedes my academic engagement.  I have degrees in film, public health, and anthropology. I have been active in the reproductive justice movement, since 1975, a year after Roe v. Wade was passed, and was solidly ensconced in reproductive politics.  I have worked with NARAL-NY, Interfaith Voices for Reproductive Justice, the Reproductive Rights Education Project at Hunter College, and the National Network of Abortion Funds.  Since then I have worked with and on issues related to various aspects of reproduction including HIV/AIDS, domestic violence, abortion politics, and birthing justice. I have authored, co-authored, or co-edited five books, most recently Reproductive Injustice: Racism, Pregnancy, and Premature Birth  (NYU Press 2019). The book was recently named a Finalist for the2020 PROSE Award in the Sociology, Anthropology and Criminology category, given by the Association of American Publishers. The Victor Turner Ethnographic Writing Award Committee  of the Society for Humanistic Anthropology awarded the book an Honorable Mention. I am also a practicing doula.

It is not only that state violence is a public health issue, but what I want people to understand is that state violence bleeds into particular public health issues—specifically, reproductive health issues.  It is parastatal violence as well, by which I mean those practices and institutions that work in parallel and intersecting ways with the state. Think about this: some of the research I did for my book Reproductive Injustice  shows both subtle and blatant examples of state and parastatal violence is operationalized against Black birthing people ranging from having security guards called on woman whose baby was in the Neonatal Intensive Care Unit, to nurses expressing the “need” to have children’s services in involved in the case of a young mother of twins, one of whom was in the NICU. These manifestations of state violence radically and derogatorily compromise the health and well- being of pregnant, laboring, and post-partum people and families.

How might Black health depend on changing our relationships to the Earth and the environment? In what ways does environmental justice intersect with Black liberation?

I would say that Black health has, in the Americas and in the diaspora, been compromised by environmental extractive, exploitation, and excretion activities. From sugar and molasses production in the Caribbean and Americas[i], to Coltan mining in the Congo, to the disposal of toxins in waterways such as the Savannah River[ii] that lies between Georgia and South Carolina and along which lies the cities of Savannah and Augusta.  The river also impacts the health of people living in cities such as Aiken, South Carolina. (Both Augusta and Aiken are home to generations of my own family). To linger on the Savannah River for just a moment, it is the fourth most polluted river in the US and a 2018 report showed that about seventy percent of the river is contaminated.[iii] Much of the reason has to do with the fact that Atomic Energy Commission seized 200,000 acres in Aiken County in 1946 to build a nuclear plant.  This was followed by corporate excretion emerging from the production of paper and the like.  The toxins in the Savannah River has resulted in changing the relationship between the Earth and the environment as a public health concern, which from my perspective means involvement of the government with the community participation. Many residents know their soil is contaminated with lead toxins such as arsenic and creosote. And some residents have documented local health problems such as rare forms of cancer. So, it stands to reason that to talk about Black liberation when death becomes communities, is to seemingly end the conversation on the note that Black liberation is compromised.  However, being compromised is never the end of the story, and as always, Black people take up emotional and political residence in challenging the structures that attempt to keep us from living. This is exactly what is happening in the Hyde Park community of Augusta, Georgia[iv]

Toni Cade Bambara’s The Salt Eaters begins with one character asking another, “Are you sure sweetheart, that you want to be well?…Just so’s you’re sure, sweetheart, and ready to be healed, cause wholeness is no trifling matter.” What does working toward individual and collective healing look like to you? What would it mean to be whole?

My unfiltered response to this question begins with this thought: Of course Black life in the Americas has never been easy; we have been the subject of and subjected to the disease of white supremacy and its never-ending eroticization with harming and killing us. So, I want to take my cue about being well by using a quote from Tiffany Lethabo King’s book, The Black Shoals: Offshore Formations of Black and Native Studies.[v] Drawing from theologian, Rev. Katie Cannon, Lethabo King says that “Anti-Black racism creates conditions of oppression and constraint that force Black people to ‘create and cultivate values and virtues on their own terms’” (King 2019: 26). Since everyday life for black people is marked by terror, then what choice do we have but to resist? Whiteness interrupts and disrupts the flow of life for Black wellness. Thus, working toward healing, generally, requires being able to really consider the ways that we are pulled in so many directions to take on tasks that should be part of a social contract for members of society. Individual healing requires radical self-care and while no one has perfected this, we must move toward giving ourselves permission to take the space to heal.  At the level of the collective, healing looks like the provision of radical care where biomedical technological complexes do not control care capitalism. It looks like community nursing, community-led sustainability, participatory governance, and the abolition of systems that do not possess accounting for human need.

What role can love, care, and mutual aid play in our collective struggle against capitalist medicine and state violence?

Here, I want to limit my comments to care, in particular radical care because it is a concept I have been thinking about as a result of the last chapter of my book. In that chapter, I focus on the women who work as, what I call, radical Black birth workers. These are the doulas, midwives, and reproductive justice advocates who provide birthing people with information about procedures, practices and policies that often harm Black birthing people. These radical care workers are pushing against the deadly and harmful consequences of being pulled into the biomedical technological complex.  They recognize that the medical system is centralized and dangerous and that clinical care causes risk for everybody. The greatest risk is during the shift change. We are aware that so many scholars have inherited analyses of care as a form of feminized labor and caregiving. Yet, the radical care to which I refer is based on the fact that birth workers have a vision that animates caring that is far more comprehensive than the labors of caregiving. Rather, the radical care work provided by birth workers is a political project in which the navigation of medical supremacy comes with a vision of Black liberation and well-being outside of that system. And while many operate within the biomedical system, they do so as part of an underground project, suturing the perforations of medical supremacy with radical care. They operationalize radical care in terms of Black leadership which is imperative for Black liberation and well-being. I would like to believe that we can disentangle care from capitalism by increasing community-generated and community-led models of caring. A model of caring that does not have at its root, profit.  What the radical care workers I have witnessed do, is a practice of love.

How does your work go beyond appeals for reform, access, inclusion, and equality? In other words, how does health justice connect directly with goals of abolition, revolution, and Black liberation?

The work I have been doing centers on using the framework of obstetric racism. Obstetric racism sits at the intersection of obstetric violence and medical racism. It is the mechanisms and practices of subordination to which Black women and people’s reproduction are subjected that track along histories of anti-black racism. This includes during preconception, pregnancy, prenatal care, labor, birth, and postpartum care (Davis 2019)[vi]. The framework highlights forms of symbolic and actual violence and abuse that medical personnel and institutions routinely perpetrate against Black women and people throughout their reproductive lives.  It is comprised of beliefs and practices leveled against the reproducing Black body. Various scholars use the term “obstetric violence” to characterize situations when obstetric patients are put at risk by dehumanizing treatment because medical professionals and staff exert reproductive dominance over them. Medical racism occurs when a patient’s race influences the treatment or diagnostic decision in the broad context of medical provision and it involves the racialization of every aspect of every organ of every black body (Hoberman 2012). While the frameworks of obstetric violence and medical racism elucidate many attributes of the medical field more generally, obstetric racism transcends the limits of each and locates the specific ways that the reproducing Black body can be jeopardized in a medical context. By using the theory of obstetric racism, I suggest, we gain a deeper understanding of the impact of the logics of racial domination on Black women and birthing people at any point in their reproductive lives.  The point of naming what is experienced in the clinical setting as racism, is to bend an arc toward justice. It seeks to dismantle the system that views Black bodies on a continuum from susceptible to immune—a practice that makes the Black body exceptional and more likely to be treated as defective. Bending the arc toward justice also seeks to shift the biomedical complex’s dependence on and reification of its own system to being one of several options for care.  In the case of reproductive health, that means all of the knowledge of health care need not reside with medical specialists, but also with laypeople and in community.

Gwendolyn Wallace (she/her) is a senior at Yale University pursuing a BA in the History of Science and Medicine, concentrating in Gender, Reproduction, and the Body. Her research interests include histories of community health activism, reproductive justice, and the intersections between race-making, science, and medicine. Gwendolyn enjoys working with young children, gardening, and searching for used bookstores to explore.

Roberto Sirvent is Professor of Political and Social Ethics at Hope International University in Fullerton, CA, and an Affiliate Scholar at Yale University’s Interdisciplinary Center for Bioethics , where he directs the Race, Bioethics, and Public Health Project . He is co-author, with fellow BAR contributor Danny Haiphong, of the book,  American Exceptionalism and American Innocence: A People’s History of Fake News—From the Revolutionary War to the War on Terror .