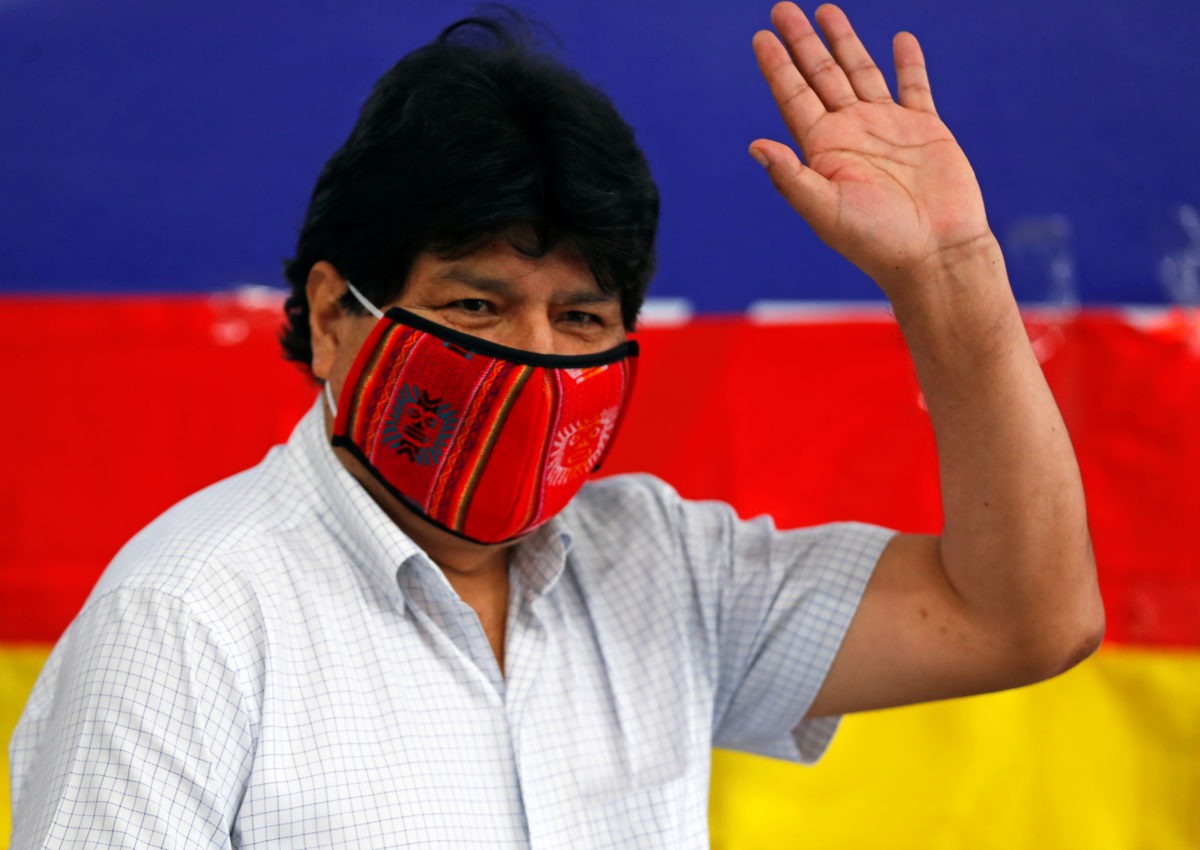 It was a long tense day, but former President Evo Morales was always confident that truth would win and the virtual victory of the MAS (Movement toward Socialism) was the confirmation, bringing hope for a new Bolivia.

Sisters and brothers: the will of the people has prevailed.
There has been a resounding victory for the MAS-IPSP. Our political movement will have the majority in both chambers. We have returned millions, now we will return dignity and freedom to the people.#JallallaBolivia pic.twitter.com/gTHa6qRhTB

A photo for the future, with smiling eyes under a red facemask that barely shows his face, and surrounded by several compatriots, it shows the moment of emotions lived by Morales here today at dawn, away from his people, but with his heart in his country.

Aware that it would be a thorny road for his homeland to raise again after the coup d’état, two massacres and the administration of a de facto government that in addition to persecutions, it cracked the economy and health care in just 11 month, Evo knows that a period of reconstruction starts now.

‘Jallalla Bolivia, Jallalla democracy,’ he said recently in this political refuge where he has lived since December 2019, a few days after the electoral victory of Alberto Fernandez, who allowed him to spend time in Buenos Aires after the coup d’état and amid a difficult departure, via Mexico, to preserve his life.

And with that Quechua-Aymara word that unites the concepts of hope, festivity and beatitude, Morales has fought since he arrived in this country 11 months ago, after a tough journey, so that his nation could recover democracy after the coup d’état that overthrew him.

Bolivia’s first indigenous president, accused by the OAS of fraud in the 2019 elections that led to the coup, and by the de facto government of multiple crimes, was even banned from being a candidate to the Senate on behalf of Cochabamba.

But after the victory of the MAS, his hope for being in his homeland is about to come true, although he also knows that the process led by Luis Arce has to be protected from all fronts.

Arce was in charge of the economic cabinet during the Evo Morales Government, one of the pillars that was most developed during his 14 years in the presidency, the one elected by the people to rule Bolivia for five years, although official statistics have to be confirmed, but the coup government and other coalitions recognized their defeat.

In the future, all Bolivians must prioritize the consolidation of the country’s democracy, peace and economic reconstruction, Morales said on Sunday, at one of two press conferences he gave. He also called to put differences aside to reach a great national agreement.

With Lucho, as he calls Arce affectionately, and former Foreign Minister David Choquehuanca (in his role of vice president), together we will build a country that will put resentments aside and will never resort to revenge, underlined the former president, who underlined, ‘We will return by millions and will give freedom back to the Bolivian people.’

In one of several interviews Morales has granted to Prensa Latina during all this time, the former president was always confident in the victory of the MAS and also called on the people to persevere, protect the vote during the elections and, above all, defend it after the electoral process. That will be the challenge in a new country.