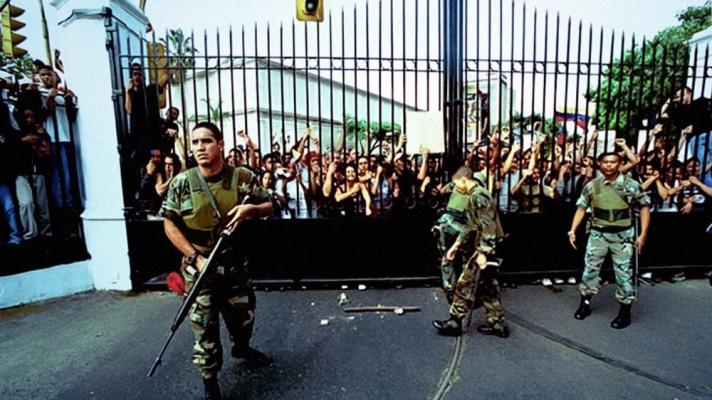 Popular organizations together with the Bolivarian National Armed Forces defeated the April 2002 coup after which the anti-Chavism discarded the term “civil society” (Photo: YVKE Mundial)

The report entitled “Detailed Conclusions of the Independent International Fact-Finding Mission to the Bolivarian Republic of Venezuela,” prepared by a group of lawyers attached to the Lima Group and the European Union (EU), identifies the collectives associated with different types of social struggles as “non-State armed groups”.

The so-called Fact-Finding Mission emerged from the favorable vote of 40% of the members of the Human Rights Council (UNHRC). Nineteen States, which did not recognize Nicolás Maduro as President of the Bolivarian Republic of Venezuela, promoted resolution 42/25 on September 27, 2019.

With this decision they hoped to advance a formal tone in the informational and legal war that seeks to delegitimize the national government and facilitate the path for the final assault on the institutions by undemocratic means.

Moreover, Latin America has witnessed the overthrow of popular governments such as those of Jacobo Arbenz (Guatemala, 1954) and Salvador Allende (Chile, 1973), followed by the persecution, and even extermination, of social organizations. While the bourgeoisies have used paramilitary groups to hinder the advance of social rights, their media criminalize the communities that have taken on the defense of their well-being. 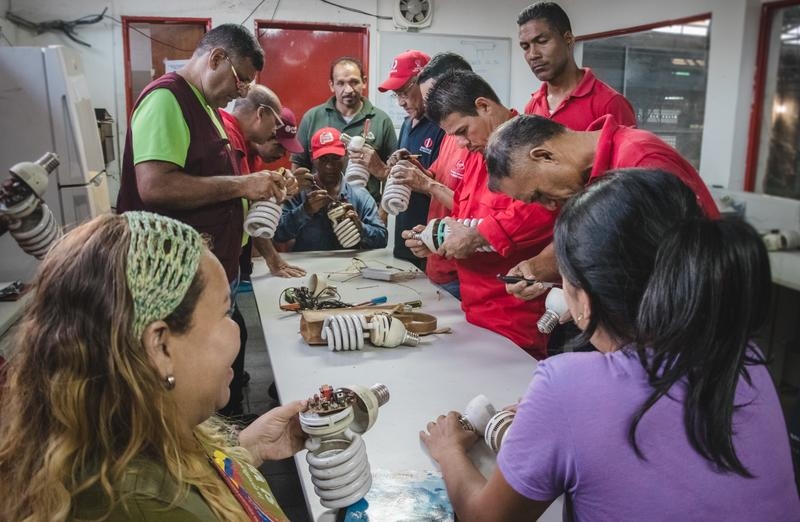 Social collectives of the San Agustín parish in Caracas organize the commercialization of food in a direct way (Photo: Revista Pueblos)

In a report made in 2014 about the collectives, French journalist Maurice Lemoine reviewed statements made by members of the collectives before the violent demonstrations through which the anti-Chavism sought to overthrow President Nicolas Maduro:

“Here the guarimbas are not tolerated (…) We are not going to allow them to kidnap us in our own neighborhood. Everyone has the right to demonstrate, to go out into the streets and to defend their rights. But not to decapitate bikers (laying out steel wires that cross the street at people’s height) or to shoot at the head of an innocent person (a fate that several people have suffered)”.

Between 2014 and 2017, several opposition groups generated violence in popular areas of Caracas and other cities using the right to protest as an excuse, looting and setting fires in educational centers, commercial premises, health facilities and libraries.

In some of these events, collectives and movements were present to repel the violence and defend both their right to freedom of movement and to tranquility. Where this was not the case, there were deaths by snipers, burnings and even electrocutions when looting was attempted.

Where does violence and criminality come from?
Is participatory democracy a crime?

Because it was the fruit of many social struggles that cost the blood of many Venezuelans, the 1999 Constitution and the rights enshrined in it seek to be preserved, applied and deepened by organized groups of people.

They dedicate themselves to diverse ends always under a principle of co-responsibility: ecologists, feminists, vindication of sexual diversity, education, culture, sports, neighborhoods, recreation, politics or defense of the Nation, as expressed in the document “The Truth of Venezuela against Infamy. Data and testimonies from a country under siege” (or The Truth about Venezuela).

These may be government-oriented, supported by one of the parties or autonomous. Some of them emerged in the 60s and 70s, coming from both the armed struggle and social action, and have maintained their popular line of work. The progressive achievements during the Bolivarian Revolution, above all in the construction of a strong social fabric, have led to deepening the mobilization of workers, peasants, indigenous people, students and citizens, by multiplying the formation of collectives. 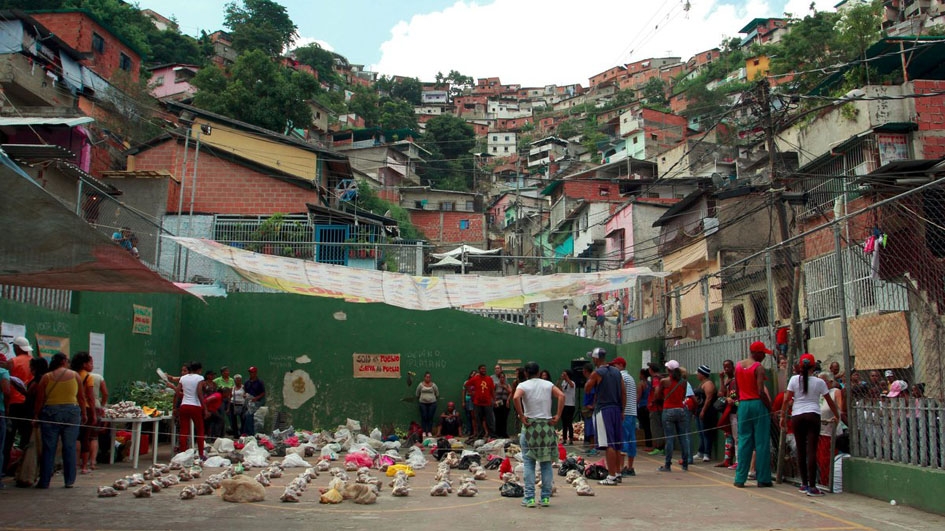 The new relationship of citizens with the State has also multiplied the forms of direct expression of popular sovereignty, beyond the vote to elect (referendum, assemblies, legislative initiatives). In addition, there has been progress in mechanisms of participation in the design, execution and control of public policies; this has been transferred to the legislative branch through the notion of “legislative people”.

The concept of human rights developed by Chavism establishes the interdependence between so-called “civil rights” and socioeconomic and environmental rights, with the legal subject existing beyond the elites. Therefore, participatory and protagonist democracy seeks to strengthen the relationship between democracy and socioeconomic and cultural justice.

Soros behind the language of montage

Anti-Chavism exploited the term “civil society” until, defeated by the civic-military mobilization of April 13, they abandoned it to call themselves the “democratic alternative,” and other terms.

In their attempt to model the language for their purposes, they imposed that the collective and the communal are synonymous with criminal violence, chaos, disorder, death, terror, and illegality. They have called every Chavista group that demonstrates in the streets “armed gangs” or “socialist militias”, accusing them of sowing terror with complete impunity.

Opposition leader Juan Guaidó’s national strategy of reconstruction for Venezuela will require confronting the collective groups that exist in the country and that follow orders from the government of Nicolás Maduro.https://t.co/OCZBpLEHbN

Alignment with the narrative of the “Parallel State”

The section that refers to social groups is located within the chapter called the Security Framework and contrasts them with the state’s security institutions. The argumentative backbone of this section is an alleged investigation published by InSight Crime, a Washington-based think tank sponsored by billionaire financial speculator George Soros, which criminalizes various organized groups in Venezuela.

Based on the specific and biased information published by the portal in 2018, the Mission determined that these expressions of popular power “have maintained a complex relationship with the government and the State security forces,” adding that “in practice they operate under parallel command structures” and going so far as to qualify them as criminal structures.

In the purest style of other narratives fabricated by the United States governments, the Mission draws on accounts from “former government and army officials” including the former director of the Bolivarian Information Service (SEBIN), Cristopher Figuera, who participated in the failed coup attempt of April 30, 2019. 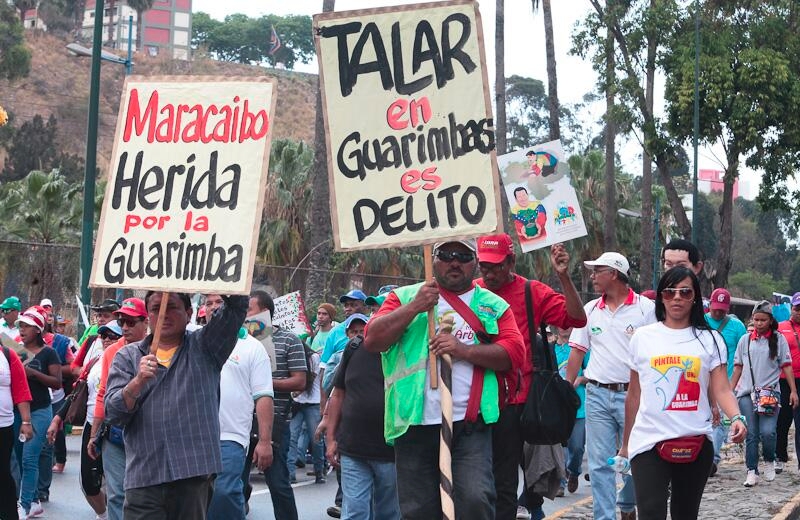 Collectives like the Productive Labor Army have been traveling around the country since 2017, setting up factories and other facilities that have been completely shut down for years (Photo: El Salto)

The series of accusations that seek to demonize the relationship between the national government and the various organized groups is accompanied by a campaign as intense as it is longstanding that comes from the coup d’état of 2002 and 2003.

Around the events of April 11, 2002, the media campaign positioned epithets such as “circles of terror” and “violent circles” to refer to the Bolivarian Circles, the first structure of popular organization created in 2001 by then President Hugo Chávez.

Both the media that organized that coup d’état and the report of the Mission dependent on the Lima Group and the EU call those who are fundamental actors in the popular organization to incorporate the communities into the government’s management to solve their local problems the “Parallel State”.

However, part of the media strategy that accompanied the April coup was to blame the Bolivarian Circles for the events that produced 19 dead and 37 wounded, using the false positive that made them responsible for the violent actions committed by the snipers, imprisoned and released by the brief government of the then president of Fedecamaras, a conclave of the business elite, Pedro Carmona Estanga.

The people saving the people

During the violent escalations organized by the anti-Chavism between 2014 and 2017, while accusing the collectives of every possible crime, the media aligned with the regime change concealed the action of “civil society” groups that closed streets, destroyed public services, and assassinated and wounded citizens at random.

The Mission’s report states that the collectives play a role in “maintaining social control in the neighborhoods or as government informants,” but other passages in the same report speak of the impact of criminal violence on Venezuelan society.

It is noteworthy that the interaction of the security forces with the population to improve levels of coexistence is criticized when it is a policy recommended by human rights organizations themselves.

The Soros Open Society Foundation, which sponsors InSight Crime, is funded by the governments of Great Britain, Germany and Sweden through their embassies in Bogotá. According to journalist Carlos Fazio, its executive director and co-founder is a former British Army officer and veteran of the conflicts in Bosnia and Northern Ireland named Jeremy McDermott, who was a war correspondent in the Balkans and the Middle East, and then correspondent for the BBC in London and the Daily Telegraph in Colombia, specializing in drug trafficking, organized crime and Colombia’s internal armed conflict.

McDermott and his co-director, Steven Dudley, former chief of the Miami Herald’s Andean region office, published an “investigation” last April called “The Venezuelan Sinaloa: the narco arrived to stay on the borders with Colombia”, which does not cite any specific source.

Fazio comments that throughout the text, the “evidence” that would confirm his claims was obtained from “ranchers interviewed in the area, whose identity will be protected for security reasons”; “sources consulted by InSight Crime in Machiques de Perijá”; “inhabitants of San Felipe” (today “Sinaloa”); “testimonies obtained by InSight Crime in Venezuelan territory” (sic). The accuracy of the source used by the Mission of Lawyers of the Lima Group is questionable.

In another of the many reports against the collectives, InSight Crime published a news item in which the walls of 26 homes and commercial establishments in 10 states of the country (Miranda, Anzoátegui, Táchira, Lara, Apure, Falcón, Yaracuy, Portuguesa, Trujillo and Mérida) were simultaneously marked with threatening messages against militants of the Popular Will, Justice First and Democratic Action parties, the majority in the form of graffiti signed by the armed “collectives”. Simultaneously. What a coincidence.

Who do the armed gangs serve?

Last May there was a shooting confrontation, with firearms, between gangs of delinquents in the José Felix Ribas neighborhood, Petare parish of the Sucre municipality in the state of Miranda, for eight days. It was an alleged territorial dispute between the gang of “el Wilexis” and “el Gusano”.

The intelligence corps determined that DEA agent Orlando Laufer instructed the alleged drug trafficker José Socorro, alias “Pépero”, to pressure Richard Cammarano, a partner of “el Wilexis”, among others, under threat. The objective: that the armed gangs orchestrate false confrontations.

Socorro was captured in Operation Black First, and he is the capo who manages the Colombian drug trafficking in the center of the country. He declared through a video that the confrontations were a tactic to keep the security forces distracted.

The confrontation between gangs in Petare, with no casualties, was part of the distraction plan agreed by the DEA with Wuileisys Alexander Acevedo Monasterios, “Wilexis” as confessed by José Alberto Socorro Hernández, alias Pepero pic.twitter.com/9ZKIYJ2QDK

This would enable them to carry out the incursion plans of Operation Gideon led by former U.S. Marine Jordan Goudreau and former Bolivarian National Guard Sergeant Antonio Jose Sequea.

This is not the only existing link between anti-Chavism and criminal gangs, nor is it the first time that the action of the latter coincides with a conspiratorial maneuver by those who operate in favor of regime change far from direct or indirect political participation.

In the meantime, the Fact-Finding Mission has stigmatized with its “conclusions” an entire people organized under the figure of “collectives” who are simply exercising their rights to association and citizen participation, guaranteed by the Venezuelan Constitution.