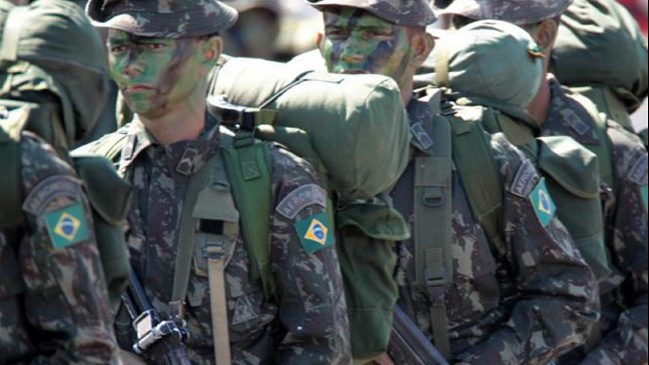 The Brazilian army participated in a military exercise aimed at Venezuela (Photo: EFE)

In September, the largest military exercise in Brazil in recent times took place. In other contexts, this news would not cause great alarm in Venezuela, however, that such an exercise is taking place after the recent visit of the current US Secretary of State, Mike Pompeo, is cause for alarm.

Between September 8 and 22, all the components of the Ministry of Defense of this South American country mobilized a contingent of 3,600 soldiers, in addition to military vehicles for all types of combat in the Amazon.

“Aircraft (planes and helicopters), rafts, regional boats, ferries, artillery pieces, the rocket launching system, army artillery missiles, cannons, machine guns, Oto Melara ‘obuseiro’ and 60, 81 and 120 mm mortars, in addition to special vehicles and trucks”, constitutes a large part of the material transported to the test area, according to a report by Vinicius Sassine in the newspaper O Globo.

According to Brazilian media, the mobilization of military equipment and its personnel to the Amazonian states of Manacapuru, Moura and Novo Airão cost the government of Jair Bolsonaro more than 6 million reais in fuel and transportation alone, approximately one million dollars. This expenditure was made in the midst of a health crisis generated by the Covid-19 pandemic, at a time when the country is in second place in the world in terms of deaths and infections.

The latest geopolitical events in South America are raising questions about the autonomy of some countries in the region, especially those that are part of the Lima Group.

The multiform war that the United States is waging against Venezuela every year has taken a turn for the worse, seeking the total collapse of the country. So far, unilateral sanctions, blocking of resources and theft of assets have been aimed at undermining the population materially and psychologically.

Since last year, levels of violence have escalated and the confrontation is now bordering on armed conflict between nations. While Colombia has served as a base of operations for terrorist groups to plan attacks against Venezuela since last year, the fact that joint military exercises are being conducted there with the U.S. military represents another level of harassment.

The same is true of Brazil. These military exercises following Pompeo’s visit are part of the strategy of surrounding Venezuela militarily.

The fact that the armies of the neighbouring countries are named does not mean that it is actually a joint operation with the United States, but that these territories and their military components are being used as aircraft carriers to attack Venezuela.

The autonomy of the governments of Iván Duque, Bolsonaro and other satellite countries is in question and they are limited to organizing their military performances to ingratiate themselves with the representative of their master beginning his tour of the subcontinent.

All weapons are aimed at Venezuela

The visit of the U.S. Secretary of State to Roraima, the border state of Brazil with Venezuela, on September 18, was the impetus behind the Brazilian army’s rehearsal. The military exercise, catalogued as “unprecedented” was based on defending itself from a supposed communist invasion.

Symbolically, the epic of the Brazilian drill was represented by soldiers from the “blue” country expelling the invaders from the “red” country. Obviously this forced narrative has been constructed to portray Venezuela as a danger to the region. Let us remember that in 2017 Julio Borges had already described Venezuelans as an “infectious disease”, as if anticipating the narrative of the “invasion”.

It is paradoxical that the economically and militarily besieged nation be catalogued as a danger to the region.

To complete the orchestra, during Pompeo’s visit Bolsonaro’s government declared Nicolás Maduro’s diplomatic representatives in the country as persona non grata, while recognizing the “diplomats” of Juan Guaidó’s fake government.

During a meeting with Brazilian Foreign Minister Ernesto Araújo, the U.S. diplomat, former director of the CIA, triggered a diplomatic and internal crisis when he spoke of “getting Maduro out of there”, a phrase that was attributed to a translation “error”.

“The meeting took place the day after the Ministry of Foreign Relations published an article referring to the ‘extinction of Maduro’s dictatorial regime'”, according to Forum Magazine.

Pompeo’s presence was condemned by the president of the House of Representatives, Rodrigo Maia, who criticized the lack of autonomy of the Brazilian government and its dishonorable diplomacy.

This criticism of Maia was supported by some former Brazilian foreign ministers in a letter. It was signed by the former President of the Republic, Fernando Henrique Cardoso (who was also Minister of Foreign Relations in the government of Itamar Franco), José Serra, Aloysio Nunes, Celso Amorim, Celso Lafer and Francisco Rezek.

“Responsible for Brazil’s international relations in all democratic governments since the end of the military dictatorship, the signatories commend Congressman Rodrigo Maia, President of the House of Representatives, for his Note of September 18, by which he repudiates the visit of the US Secretary of State, Mike Pompeo, to the Operation Reception facilities in Roraima, near the Venezuelan border”, reads the communiqué.

The joint demonstration occurred one day after Minister Ernesto Araújo responded to Maia’s criticism by arguing that there is no “autonomy and arrogance in ignoring the suffering of the Venezuelan people”.

The encirclement is tightened

Despite the electoral and pandemic scenario in which the United States finds itself, Washington’s interventionist policy continues unabated. The US Vice President’s tour has the clear mission of continuing the pressure against the Bolivarian Revolution.

That is why it is no coincidence that the tour is focused, for now, on visiting the countries surrounding Venezuela. Suriname, Guyana, Brazil and Colombia are the nations on the agenda “to strengthen regional security” against Maduro’s government.

Military threats are beginning to have an impact that they did not have before. In the case of Brazil, the extremely servile position to U.S. interests goes beyond the historical limits of both its foreign and military policies, which are accustomed to greater autonomy and little conflict with neighbours.