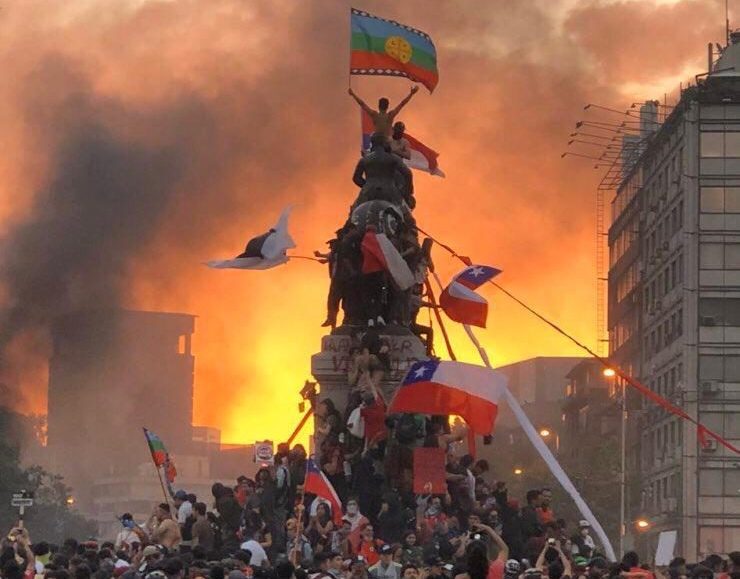 Marcelo Osses is one of the representatives of the radio station Plaza de la Dignidad, whose colleagues broadcast every time there are demonstrations in that Plaza, which has become an emblematic reference of the Chilean revolt. We spoke with him before October 18, the first anniversary of that moment when a group of young students jumped over the turnstiles of the subway, and began a revolt that has continued to this day.

Marcelo, can you describe the pulse of this new 18th?

This day of celebration provokes great expectations throughout the country, both from the participants and protagonists of the revolt, as well as those who oppose it, everyone is preparing in their own way. We, who are active participants in the mobilizations, have been going out into the streets for more than a month generating large and small mobilizations. Mostly, in Santiago. There are many regions that are under quarantine and it costs more for people to go out because they have all the restrictions of the state of emergency. Chile already has a state of emergency that has been renewed. We are one of the few countries where a national curfew is imposed, not only in certain areas, but in the entire country. We are looking forward to these days. The activities have been increasing, especially since October 3rd, the day when Antony Araya, a young protester who was thrown from a height of more than 7 meters into the Mapocho River, was attacked. This resulted in major injuries, but luckily he is now recovering. Since that day, anger against the police, against the government and against the system has been manifesting itself in all spaces. From social networks to street demonstrations. This Monday we had a day of mobilization of the resistance of the indigenous peoples, particularly the Mapuche peoples. This Friday we will again mobilize throughout the territory, on Saturday too and of course on Sunday, the day we celebrate this first year since the beginning of the revolt.

Nevertheless, the government is establishing a climate of war, threatening to send many carabineros and also military personnel onto the streets.

The threats by the government have been multiple. The media campaign that they have carried out began several weeks ago. The government announced that it will have more than 40,000 police in the streets, as well as military personnel, because the state of emergency authorizes it. This past Wednesday there was a large mobilization in Puente Alto, a commune in the southern sector of Santiago, where there were people detained and wounded, and where the military intervention was intense. Fortunately, the people managed to expel them. This confrontation is news in our rogue press; the people managed to expel the military trucks from the area. They were removed from the area. This is the level of confrontation that is taking place. From now until Sunday, in spite of the threats, an open campaign of government criminalization, as well as from a good part of the parties that call themselves opposition parties but that have been part of this dictatorship in a neoliberal democracy, and that now have come out as a block to denounce the violence of the people, of course covered up with violence “wherever it comes from”. In practice it has been to condemn the street struggle. They have united in a great systemic block to try to demonize the popular mobilization and to try to prevent the people from taking to the streets these days. That is the atmosphere. It is an uncertain diagnosis what is going to happen. Whatever the case, the mobilization is going to be very strong. We don’t know exactly how extensive it will be, but there will be mobilizations throughout the country, especially in those areas where there is no quarantine. Where there is quarantine, for example in the Fifth Region, which has been emblematic of the mobilisations, the calls are for a zone where there is no quarantine. So people are going to concentrate there on Sunday.

Will your broadcast be on the air as usual, transmitting from the epicentre of the mobilisations?

We are all waiting in anticipation of what is going to happen, trying to make our contribution. We, as Radio Plaza la Dignidad, are broadcasting and remembering the process of last year. As a beginning of the revolt, the previous days the young people had carried out their actions, in the high schools, the colleges, with the resistance inside afterwards the taking of the subways, the jumping of the turnstiles and the beginning of the mobilization. We have been remembering, with great emphasis, the history of this revolt. We are fully prepared to show what is going to happen and we assume that, like the whole political spectrum, this is going to be a day of very intense popular mobilization.

A week later, on October 25, the constituent plebiscite is called, a date that is expected but very controversial, because there are different positions on the left about whether to participate or not. How do you see the panorama in that sense?

This plebiscite or this constitutional process that the entire political caste agreed to in order to literally save themselves, as the former presidential candidate Alejandro Gullier literally said. He said it openly, that all political leaders agreed to save the government, to save Piñera. He said it directly, because if Piñera fell, it was likely that much of the institutionality would fall. He acknowledges that they agreed on that. He claims that he was in the opposite position, which was to ask for the resignation of political positions, from the president to the parliament. It is clear that this agreement was to save himself. Unfortunately for the popular movement. For many reasons there is a strong tradition among the Chilean people of going to elections, and the electoral process that first initiates this process is largely imposed. There is a great debate and somehow what matters in the end is the second step of this process, which will be longer. For us, the people have already said that they no longer want this Constitution, since last October 18, we do not need a plebiscite to know that, but now what is coming?

Explain to us what you think is coming and where the trap is.

The idea that the institutional path based on a convention, an entelechy they created, would not bring about a real change in the Constitution, is growing in strength. Both because of the mechanisms and because of the political disposition involved. The new Constitution will maintain the prerogative that the current one has for economic, political and cultural management. In practice, there will be no major changes in the new Constitution. In fact, they say there will be minimal changes, with a basic article that in practice will be the organic constitutional laws, or the general laws that determine most of the important issues. These laws are not to be circumvented. They have not been able to change them literally. For example, those that determine economic conditions. We, the masses, have been growing in social influence, meaning that the delegitimization of this convention has been increasing. Many people say yes, I am going to participate in the plebiscite, but I do not believe in what comes after, because it has become evident that the law 21200 which determines this process, is made so that it is the political parties, not the movements, which will define who the constitutional parties are. It is governed by the same law of elections of deputies to Parliament. There are no independents. The possibility of electing people who are not defined by the parties is non-existent. So it is becoming clearer that the second step, i.e. the conventional election, is neither democratic nor legitimate.

In the face of what you have said, what is the alternative?

The only option is the sovereign Constituent Assembly, which has full powers, which can found a new Chile, which is original, which has no power above it. It is a valid option that is beginning to be implemented in the popular territorial assemblies, in many areas, the idea is beginning to grow that we must create deliberative bodies that will, from now on and in each space, discuss the basic problems, the political problems and the concerns of all Chile. But the institutional process that continues is beginning with a very powerful illegitimacy. It will be difficult for them to produce this legitimacy in the future convention. We already know that the right wing is in favor of “Approval”, because the right wing has significant economic and political groups, except for a small sector, all of them are in favor of “Approval”, because they understand that it is a lifeline. It will win by a very significant number and a very high percentage. It is also not yet clear how much of the electoral roll will participate. Those who are going to participate are going to vote for “Approval”. They are going to vote for this convention to begin the process of legitimacy that will have important things to consider. Our task is to constitute our deliberative body and to begin to discuss in a more organic way the issues outside of this constitutional process.

Not abandoning the street…

Something else they are discussing, which has had a public impact, is that they do not know what is going to happen on the 25th. The ideologues of the “Apruebo” of this social democratic sector, of an unreal left, have waged this whole campaign of terror against the people who are mobilized. “You are committing a health violation, it is not necessary, stay in your homes,” they tell us. This is the speech they are making. On the 25th it would be unprecedented, in the last 32 years, since the plebiscite of 88, for people to take to the streets on the same day to demonstrate in a different way. They fear it will be violent. And it is probable that this will happen. But it hasn’t happened, it’s not traditional that, at the end of Election Day, people go out. This year, they expect that mobilizations everywhere will be important and even violent. So, it will be incomprehensible that the people who win at the polls will, in turn, come out to demonstrate massively and violently. It will be a very paradoxical situation on the 25th.