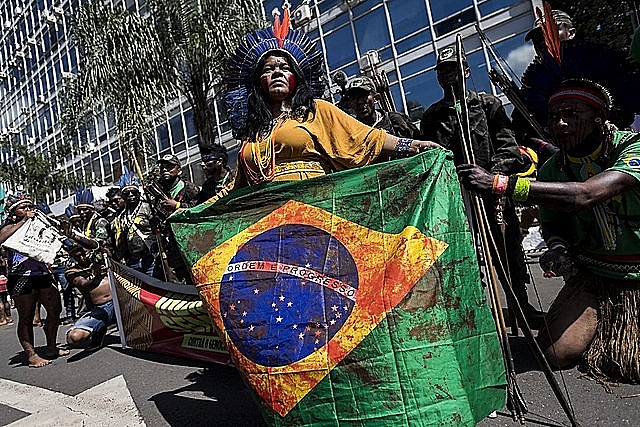 Confirming all expectations, the first year of the Jair Bolsonaro government mas marred by a significant rise in all sorts of violence against indigenous people in Brazil. A report commissioned by the Indigenous Missionary Council (Cimi), which analyzes data from 2019, will be published by the entity on Wednesday, September 30th, via a live stream available on Brasil de Fato’s social media accounts.

All together, 113 indigenous persons were murdered last year, according to official data from Special Secretariat of Indigenous Health (Sesai) that was obtained by Cimi. Though the number is a little smaller than that registered the previous year (135), other types of violence against these communities increased, 276 cases in 2019 compared to 110 in 2018. 33 death threats were reported, 34 unspecified threats, 20 cases of manslaughter, 24 attempted murders, 10 cases of sexual violence, 13 cases of bodily harm and 16 instances of racism or ethnic discrimination.

One of the more renown cases, that garnered international attention, was the murder of Paulo Paulino Guajajara late last year. Paulino, also known as the “Bad Wolf”, was part of a conservationist group called the “Guardians of the Forest”. His party was ambushed by loggers well inside so called “protected” areas.

The government’s neglect of the rights of indigenous people, has resulted in an expressive increase in the number of suicides and of infant mortality within villages. Based on the Access to Information Law, Cimi obtained data from the Federal government showing that there were 133 cases of suicide in these communities in 2019, 32 more than the previous year. The state of Amazonas and Mato Grosso do Sul were the worst affected, with 59 and 34 cases respectively.

Besides fulfilling his campaign promise of not demarcating any new lands for indigenous peoples, the Jair Bolsonaro government has backtracked on 27 regulatory procedures related to new reservations that had been in the works. According to Cimi, out of the 1298 indigenous lands in Brazil, 829 (63%) of them have some sort of pending judicial issue with regards to their borders.

As a result of the political decision to freeze any new demarcation processes for indigenous reservations, conflicts over land rights have more than tripled in 2019, with 35 occurrences, compared to only 11 in 2018. In one of these instances, farmers from the state of Mato Grosso do Sul used modified bulldozers to attack native communities. Residents of the Dourados reservation reported that these bulldozers had holes in their sides that were used to fire guns in all directions. The Guarani-Kaiowá tribe also stated that the attacks would always occur between 11pm and 4am.

In the state of Amazonas, the Apurinã and Jamamadi people are being constantly attacked by farmers who lay claim to their territory. They are currently confined to small strip of land. Funai, the government agency responsible for native affairs, began a land demarcation process in 2003, however, the process has apparently been abandoned.

The data brought forth by Cimi, shows that invasions of indigenous lands, associated with the exploitation of the natural resources they contain, have been growing at an alarming rate. The entity has attributed this growth to the anti-indigenous posture of the nation’s president.

Their report states that, “in 2019, Cimi registered 256 cases of land invasions, illegal exploitation of natural resources and multiple instances of property damage in 151 reservations, affecting 143 different native tribes. This figure is more than double that of 2018, when we had a total of 111 cases”.

In the state of Rondônia for example, the wave of invasions has intensified the threat to native Uru-Eu-Wau-Wau lands. Cimi points out that in April 2019 alone, more than 180 illegal invaders entered the territory. In the Karipuna indigenous land, more than 11 thousand hectares of forest were cut down, which were later sold by the loggers, who would lie to buyers about the legality of the purchase. A recent Federal Police operation in the area, confiscated machinery, documents and electronic equipment.