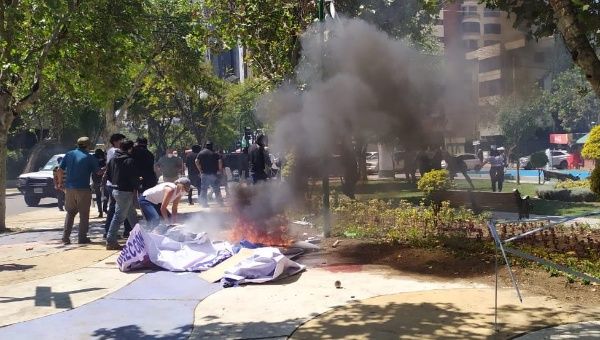 Videos circulating on social media show what appears to be people in MAS t-shirts being chased down in the area of the 4 de Noviembre plaza in Cochabamba, while posters and other materials were taken down.

Speaking to local news networks, MAS members said they were campaigning for the party’s Arce-Choquehuanca ticket and local candidates in the Plaza, when members of the Resistencia Juvenil Cochala (RJC) appeared and began setting off firecrackers and tear gas, while others were chased, grabbed and beaten.

The attacks have been denounced by frontrunner, and socialist presidential candidate for the MAS, Luis Arce, who demanded respect for the right to carry out peaceful electoral campaign activities.

Former President Evo Morales also denounced the attacks on social media: ”We hold the coup leaders responsible for the attacks by members of the Cochala Youth Resistance against MAS militants who were campaigning in #Cochabamba. The danger of violence, racism and separatism must not return to the country.”

According to Los Tiempos newspaper, the leader of Resistencia Juvenil Cochala (RJC), Yassir Molina claims that his group was not the authors of the eviction of the campaigners from the plaza, and said they already have eight legal proceedings active.

Resistencia Juvenil Cochala extremists burned MAS campaign tents and attacked members at the 4 de Noviembre Plaza in Cochabamba. The attacks have been denounced by @LuchoXBolivia who demanded respect for the right to carry out peaceful electoral campaign activities. pic.twitter.com/c58Udm710S
— Kawsachun News (@KawsachunNews) September 19, 2020

In August, armed shock groups were allowed to wage attacks on anti-coup demonstrations in which broad sectors had mobilized in defense of democratic elections around the country.

The coup regime-linked groups showed up at road blockades to try to impede the right to protest, using violent tactics as police looked on without intervening.

Coup leader and third place presidential candidate Fernando Camacho at the time issued an ‘open letter’ to senator-turned-regime-leader Jeanine Añez, threatening to mobilize violent extremist groups against leftists if the regime failed to crush the protests.

On September 17, Bolivia’s Ombudsman released a 300+ page report on events which occurred following the October 20, 2019 general election, stated that ‘parastatal groups’ were formed and implemented under the defacto administration, assuming “internal security functions of exclusive competence of the Bolivian Police, under the permissibility of this institution.”

Given the long list of violations detailed in this Ombudsman report it is unclear to what extent free elections can be held if one party, the Movement Towards Socialism, cannot express itself freely under the violence promoted by the defacto authorities and the right-wing candidates Carlos Mesa and Fernando Camacho.

Resistencia Juvenil Cochala extremists burned MAS campaign tents and attacked members at the 4 de Noviembre Plaza in Cochabamba. The attacks have been denounced by @LuchoXBolivia who demanded respect for the right to carry out peaceful electoral campaign activities. pic.twitter.com/c58Udm710S

MAS campaigners say the Resistencia Juvenil Cochala appeared and began setting off firecrackers and tear gas while people were grabbed and beaten. The leader of RJC claims it wasn't them, saying they're already involved in eight current legal proceedings. pic.twitter.com/KCgPQMpQPh

Human rights defender David Inca, of the Asamblea de Derechos Humanos de El Alto, was arrested by police earlier today outside of the Palacio Quemado. Inca was accompanied by relatives of victims of the Senkata massacre who were demanding justice and compensation. pic.twitter.com/rYoNUUVtjE