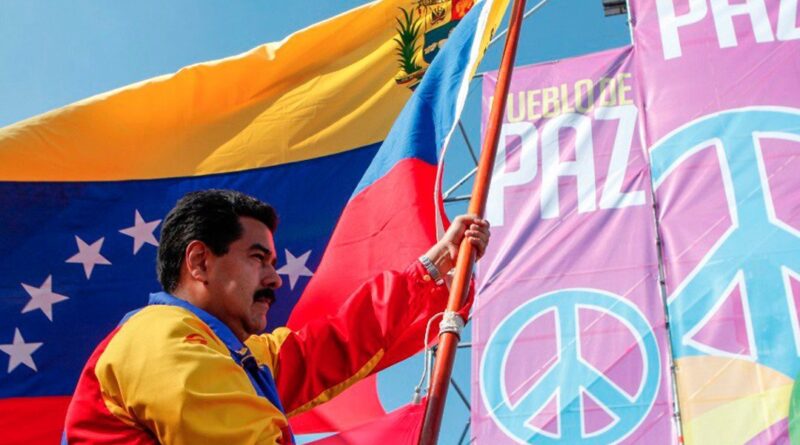 In Venezuela, we have been resisting different phases of the same plan of aggression for more than two decades. The accumulation of failures, rudeness and clumsiness, far from discouraging the imperial forces — it does not matter whether they suit up as Republicans or Democrats — seems to irritate the arrogant and quarrelsome stubbornness that characterizes them. The last stage of the plan has tried to create the conditions to try to lead our people to a civil war. To incite brothers to kill each other, and then to come to be sated on the pools of blood, appetites derived from their soul of a modern Nosferatu.

There is a script and several plots that emerge from this, but without a doubt its main objective is to try to push the Venezuelan people to the limit through despair and asphixiation, to produce pain. It is not something that is part of an assumption or conspiracy theory, there is a document that explains the mechanism and the intention of attacking the people so that they rebel against the government.

Richard Nephew, former adviser to President Barack Obama for the design and monitoring of the aggression against Iran, explains with cynical frankness the criminal objective of imposing unilateral coercive measures on a country, in his book (a confession in part) “The Art of Sanctions. A Look from the Field.”

Nephew is relentless, the main objective is to “cause pain” and “subject the people of the sanctioned country to the worst hardships.” This seeks to generate conditions for a situation of social disturbance such that it lends itself to coups, popular rebellions and chaos. These scenarios can lead, obviously, to a civil war or many internal wars, also fueled by the war industries of capitalism.

Of course, to avoid total impoverishment and general disorder, the American academic-official-agent is generous enough to offer an arrogant lifeline to the people of the sanctioned state: surrender and capitulation, pulverizing their sovereignty and dignity.

This new imperialist modality of holistic war, based on economic aggression, is very deficient in trying to predict the reaction of the peoples and rulers of free countries. Cuba, Iran, Syria and Venezuela are living examples of this. In these cases, not only has their perverse formula failed, but they have also strengthened the political processes and governments they seek to liquidate.

In the Venezuelan case, a combined identity of patriotism, love of peace and dignity, anti-imperialist by definition, has anticipated the failure of US aggression from day zero. The historical, moral and conscientious burden of being the sons and daughters of Simón Bolívar is not a variable that the Pentagon or State Department software can process. If we add the variable Hugo Chávez and the Bolivarian re-kindling in the XXI century, their sophisticated last generation computers simply throw out “error” or delete these variables from the algorithm so that their programs can run, without overheating the expensive computers.

To seek a fratricidal confrontation between Venezuelans, they have found an indolent and very obedient ally in a fraction of the national opposition, which never abandoned violence as a proposal for action; that makes continuous calls to the Bolivarian National Armed Forces (FANB) to take up arms against the people, always unsuccessfully; that hires mercenaries, trains them in Colombia and then launches them in adventurous incursions on our coasts, always crashing against the civic-military-police union, a popular exercise that guarantees the sovereignty and dignity of our homeland.

The Venezuelan people learned from their history, from the indelible marks of war. From the battle for the self-determination of their destiny in the face of European colonialism — which even today has spasms of colonial reminiscence with misguided positions on Venezuela, contrary to public international law — to the Venezuelan Federal War or Long War.

A full stop on this process. The Federal War was born from the the national oligarchy’s betrayal of Simón Bolívar’s project. The consequence of La Cosiata, in 1830, was more than a document that separated us from the unionist hope that the Liberator projected. It was an exercise that separated the great popular masses from the right to enjoy their freedom, won with pain and blood on the battlefields of South America.

Once again having the possibility of producing their own food and living with dignity expropriated, they organized themselves together with the General of the Sovereign People, Ezequiel Zamora, under the thunderous cry of “Land and free men!” There the people was configured as a deliberative actor of Venezuelan politics. The cimarrón, the Indians, the zambos; a whole class that was present to establish a new system of social justice.

However, the ravages produced by the war were devastating for the population. It left deep wounds, as General Jacinto Pérez Arcay points out in his extraordinary book, “The Federal War: Consequences.”

What happened during and after the internal fratricidal war? On the ashes of the generation of self-extinguished soldiers without having borne fruit or examples, the survivors rose up who, tired of killing each other, would end up introjected into their unconscious the idea of rejection of new battles and everything related to them.

The Venezuelan people do not want any more wars, much less one in which they have to fight their own brothers. We remember the dramatic scene towards the end of the great film by Serbian Emir Kusturica –Underground –, inspired by the Balkan War. After the protagonist murdered his brother comes the powerful sentence: “No war can be called as such until the moment in which one brother kills another.”

There is no possible justification for trying to lead us into an internal conflict, there is no possibility that they can materialize their macabre plan. Neither the people nor the Bolivarian revolution will ever allow us to reach that point. The first legionary of peace is, and will be, President Nicolás Maduro.

The main premise of the Bolivarian Revolution has been to achieve peace, but one that is a sustainable exercise of the people. Commander Chávez, when he spoke of socialism, always proposed it as a mechanism to guarantee peace: “Only through socialism can justice, social justice, profound justice be achieved, and only through the path of justice can we achieve true peace.”

That is a strategic, ontological dimension: to seek a justice system that results in the recognition of Venezuelans, one with another, through the verification of equality and economic and social stability.

But also in the tactical sense. Chávez led countless actions to generate spaces for dialogue among Venezuelans. Even in the worst moments of opposition violence, during the 2002 coup, he always reached out to seek harmony. And if we were to talk about what Chávez meant for the peace process in neighboring Colombia, words would not be enough to describe his vocation, dedication and action: always seeking harmony among the brothers. This is a humanistic principle that we only find in his spirit of social vocation.

Nicolás Maduro has followed this guideline of the Commander to the letter, he has adopt it as an inalienable value of revolutionary action: both in the structural dimension, continuing with the support of social justice policies for the people despite the criminal siege to our economy; as in each of the steps he takes in his daily life to contain the bloody and warlike spirit of the “Pitiyanki” (pro-Yankee) opposition.

Each of their actions has always resulted in the maintenance of peace in Venezuela. The provocations, the rudeness, the violence, the lies, the assassination attempts, the incursions by mercenaries, had as a response from President Maduro revolutionary firmness, solidity at all levels of national society and the search for dialogue, mechanisms for concert in the national spirit.

If we want to understand the magnitude of the political capacity and management of the conflict by President Maduro, we only have to take a look at the events of 2017. The opposition sought to set the country on fire through a climate of continued violence. The situation called for an escalation in the confrontation between our brothers. But the President’s call for a constituent process, the call for an original consultation –always appealing to the wisdom of the people and radical democracy — put an end to violence and to political and social instability.

Today, despite the blindness of some spokesmen for the “Monroist” opposition, President Maduro offers a new space for the resolution of our conflicts in peace, through dialogue and democracy. This call, fortunately, has found an echo in almost the entire country, including in a good part of our adversaries who believe in the capacity that Venezuelans have to resolve our differences in peace. Even the Catholic Episcopal Conference, Fedecámaras (a main business guild) and the vast majority of the opposition parties take up the challenge for peace.

The open process led to the constitutional election of a new National Electoral Council, the magnanimous gesture of pardoning more than 100 Venezuelans involved in a whole range of attacks on institutions, from coup attempts, to mercenary incursions and assassination attempts. And as established by the Constitution of the Bolivarian Republic of Venezuela, all these gestures contribute to the call for an electoral process to re-legitimize the Legislative Power, with the broadest electoral guarantees, open invitations to observe the event.

All of this demonstrates the undeniable will for peace that the Bolivarian revolution has. Only this humanistic and popular process is the guarantor of a lasting peace, a cultivation for social justice. Let’s recall a fragment of the poem “Despertar” by the great writer Andrés Eloy Blanco:

We, the people and the Revolution, conjure up the nostalgic air of Andrés Eloy. We also fight for the consolidation of a full homeland. We are certain of the definitive consolidation of that country that Bolívar left us and Hugo Chávez rescued. Fully sovereign and independent. We have a homeland and a people convinced that there is no way to peace, but that, as Mahatma Gandhi taught us, peace is the only possible path.