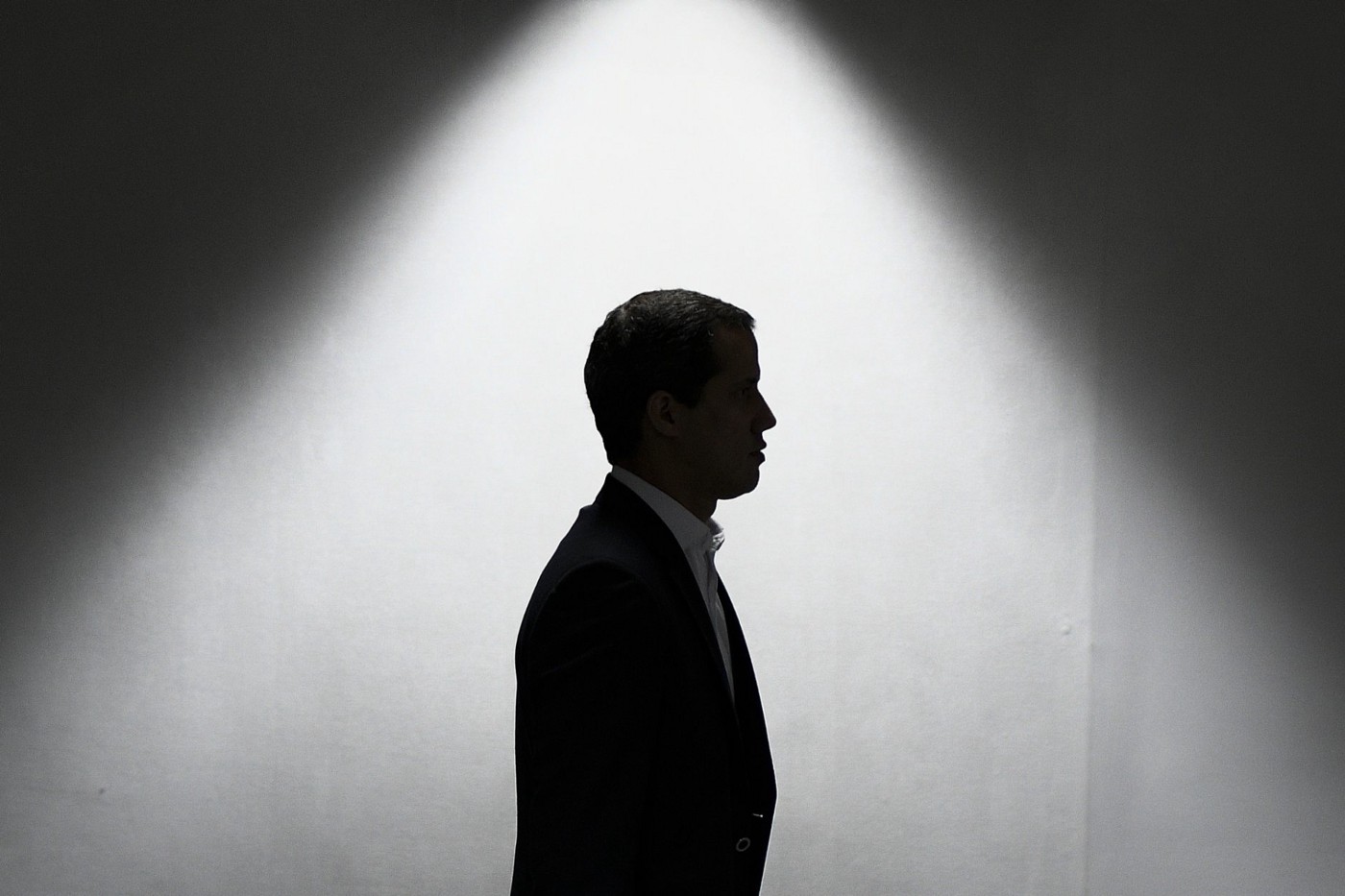 The scandals and corruption, blackmail and extortion by the “fake government” of Juan Guaidó have undermined his image. Photo: AP

The Miami-based anti-Chávez journalist Patricia Poleo has once again fired on the imposed “leader” of the Venezuelan opposition, Juan Guaidó, this time revealing an extortion plot against businessmen at the expense of his artificial and non-existent government.

The increasingly intricate events of corruption of Guaidó’s parallel government, sustained by powerful elements abroad, from the United States, are an affront to national assets and the legitimate control of the Venezuelan State over them.

These resources are also the apple of discord between political and business factors outside Venezuela; furthermore, they are the cause of extortion, pressure and mutual blackmail, which emerge as scavenger disputes.

All this takes place through the “recovery” scheme of the “fake government” of Venezuelan assets abroad, which once placed in the hands of Guaidó officials outside Venezuela, are kept outside Venezuelan institutions, without accountability within murky business modalities.

Economic hitmen in the Caribbean

Poleo disclosed a series of documents that show the formation of a consortium called Caribbean Recovery Assets (CRA) formed by the companies LockinCapital and Global Risk Management, whose directors are Jorge Reyes and Pedro Antar.

CRA, created strictly to go hunting for national assets in the Caribbean, maintains the special characteristics of being the corporate face to act, as a third party, in the execution of “administrative” actions of the “parallel government” of Guaidó.

Venezuela, through PDV Caribe, has a capital percentage range between 25% and 60% in companies founded in 12 Caribbean countries, which are part of the Petrocaribe goods and services platform for fuel distribution within the framework of said energy cooperation treaty. These goods would be the “target” of these pseudo-legal financial corsair operations.

“the purpose of the CRA proposal, would be to execute a short term (3 months) strategic plan to recover overdue and past due debts and initiate the restructuring renegotiation of 50% of the financed accounts, thus providing the interim government with new revenues and funds in dollars”.

The CRA consortium would act as an intermediary in debt management, but in addition to this, it would also deal with these companies, promoting “asset recovery” and carrying out financial “intelligence” work in 19 Caribbean countries. Therefore, they would be beneficiaries of 18% of the value of the amounts “recovered”, both in liquid resources and physical assets.

So many euphemisms in the financial jargon actually cover up acts of corporate hitmanship, through the CRA consortium, as thugs who had the objective of attacking companies and governments in the Caribbean by exerting pressure.

Poleo, who in his report clearly agrees with the deployment of CRA, says that the consortium’s efforts were frustrated by failed negotiations with Guaidó’s team.

The consortium’s actions would be backed by a contract between them and the “interim government,” a contract Guaidó had with CRA that, although it had an initial “good pro”, did not continue, according to Poleo,

“because the representatives of the Consortium refused to be blackmailed, to pay the commissions and bribes demanded by each of the officials of the Interim Government, in exchange for granting them the contract”.

It should be noted that, in this plot, Poleo does not represent a defender of the good procedure that the proto-government of Guaidó should have. Her work as an infomercenary, in this case, is clearly supported by screen captures, evidence and other data that were provided by the “affected”, namely, the representatives of the CRA consortium, who make an evident claim through the media mire for the frustrated business, for not being able to get 18% of the resources they intended to plunder in the Caribbean.

The brothers Fernando and Magin Blasi-Blanchard participated in this composition. Fernando, as Guaidó’s chargé d’affaires in Washington and right-hand man of Guaidó’s “ambassador” in that country, Carlos Vecchio.

José Ignacio Hernández, Guaidó’s fake attorney, who would have given the go-ahead to CRA for his “work” and his 18% commission, also reappears. Likewise, the president of the Ad Hoc Board of PDVSA, the fake PDVSA of Guaidó, Luis Augusto Pacheco Rodríguez, and Yon Goicoechea as a congressman.

All participated in preparatory meetings to orchestrate the crusades in the Caribbean in charge of the referred consortium. Several meetings were held for that purpose in early 2019, coinciding with the furor of the “parallel government” and the search for Venezuelan assets.

However, by October 2019, everything would lead to the recently created Presidential Commission for Asset Management, so the representatives of the consortium began to establish an understanding with Javier Troconis, head of that commission appointed by Guaidó.

Poleo reports that Fernando and Magin Blasi-Blanchard, authorized by Troconis, demanded from CRA “a commission of $750,000, and that of the 18% of the Consortium’s fees, 50% be given to them. That is, that they be considered as partners in the consortium they were hiring”. This was only to give rise to their contract. 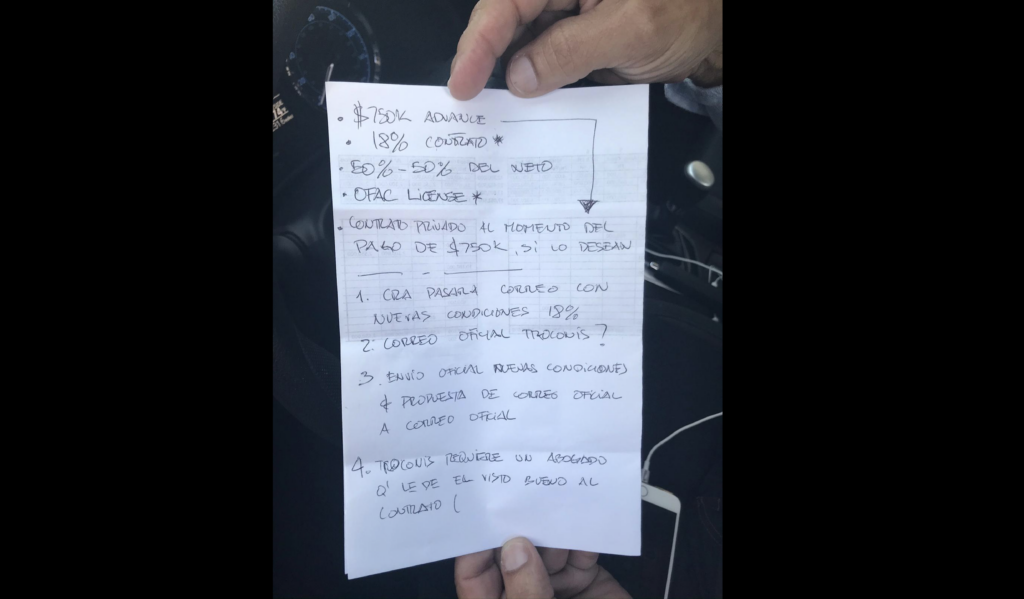 Document showing that Guaidó’s team demands 50% of the profits from the CRA consortium for “asset recovery”. Photo: Power Factors

After months of delay and in view of CRA’s refusal to pay the extortion, they would be approached again by Magin Blasi-Blanchard, demanding an advance of the $750,000: “You have five minutes to deposit the $50,000. If not… Forget about the contract!”.

In the best tropical gangster style.

These denunciations, with detailed phrases, reach Poleo because of accusations by Jorge Reyes and Pedro Antar, the supposed “affected”. The journalist, according to her sources (CRA), has concluded that the extortion to which these businessmen were subjected constitutes a federal crime in the United States, according to the text of the Foreign Corrupt Practices Act.

This law “prohibits companies and Americans from paying bribes to foreign officials in the United States to promote trade agreements. The law applies to prohibited conduct anywhere in the world and extends to U.S. companies listed on the stock exchange,” Poleo said.

The plot becomes more intricate and more dangerous, as US officials would be aware of the CRA consortium’s intentions and its frustrated negotiations with the “interim government”.

Poleo asked the CRA consortium’s directors if any U.S. official knew of the proposed “recovery” of Venezuelan assets in Petrocaribe, and they responded that both former Florida State Governor and now Senator Rick Scott, and Senator Marco Rubio, know of it, the latter through a written communication sent to his email on February 24, 2020.

This accusation could be understood as an additional mechanism of pressure that the CRA uses through Poleo against Guaidó and his staff, to let them know that both Scott and Rubio (key allies of anti-Chávez) are aware of their practices.

The denunciations sting and spread. In another vein, but also concerning the criminal practices of Guaidó’s “parallel government”, other acts of extortion against businessmen and the use of the Office of Foreign Assets Control (OFAC) in the United States for such purposes were highlighted.

Poleo published new allegations in which several Venezuelan businessmen were extorted by Guaidó officials and threatened with being placed on an OFAC “blacklist” for having relations with the Venezuelan government.

The complexity of the confrontations between the political and business factors of anti-Chávez, for Venezuelan goods and for the trail of contradictions left by the blockade against the country, has reached the sphere of communications, adding to the increasingly numerous denunciations against Guaidó and its acolytes outside Venezuela.