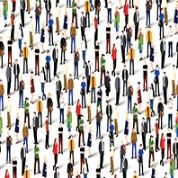 We are an immense cluster of unconnected communication initiatives. So much damage has been done by individualism, sectarianism and isolationism… even when working as a team, some think that the others are part of a set that are only there to serve the one who thinks he is the “boss” and it’s “his own work”. We are in danger if we remain an immense group of islands loaded with “good ideas”, but cut off from communication. A group of islands only united paradoxically by what separates them. It is impossible for our species to live in isolation, even if we think of ourselves as self-sufficient, self-created. Our hypothetical “singular personality”, is nothing more than the product of social relations.

Some think that it is the opposite, that we are living a “proliferation” of hyper-saturated communication with empty messages. That there is an overdose of tele-produced media and “participatory” and “democratized” social networks. We are not suffering from a lack of communication but rather from a saturation of media interactivity. But such a description does not coincide at all with the real map of the ownership of the tools for communication, of the commercialized semantic engines and much less in the dominant model of monopolistic accumulation in which the immense majority of human beings live silenced and reduced to reproducing, objectively and subjectively, the devices of their profitable alienation to the utmost.

But the asymmetry has not cancelled out the need for expression. Communicating is a social need, a quality and a human right of the first order and, for that reason, initiatives proliferate under the dynamics of historical class tensions and urgencies of all kinds with which capitalism overwhelms us. Unprotected, or clandestine, communications are felt in an unequal and combined way. Although not always, because of the isolation, we know.

Joining together does not mean we have to wear the same uniform. It implies, in the first place, informing ourselves with all the rigor, in time and form, what we think and how we propose to intervene in the transformation of the world towards another of objective conditions. The what and the how by meticulous and dynamic consensus. The what and the how by solving the oldest problems from the bottom up. From the most neglected and urgent to those specific to certain strategic sectors. Without waste, without ambushes, without opportunism or reform. To begin with only in this way can we build bridges relevant to the needs and convert the “group of islands” into a “network”. There is no lack of tools to connect, there is a lack of democratization for political unity and a lack of political will to unite us from the bases. The “powers that be” are very afraid of that.

Unity must be the concrete expression of new organizational links, creators of practical solutions, towards conditions of existence in tune with the struggles and their emancipatory programs. In the first place, internationalism that expresses us as a planetary social force, created by capitalism, that seeks to emancipate itself with a global struggle, economic and cultural, against the system that depredates the planet and people. “Agreeing” must define how.

The idea is to build bridges in the group of islands to break the isolation and the antagonisms induced between the peoples. Fighting together against class divisions in trade and the world market and in industrial production hijacked by the dictatorship of usury. The internationalism of the oppressed converted into a network of bridges against the monopolies of communication and information. We must always remember that international “alliances” between the ruling class are only temporary business deals that we finance to our detriment at all times. Every bridge must be reorganized brotherhood for the struggle.

Such bridges are not an exclusive goal of ours, it has been desired for a long time. What is updated in these bridges is a struggle that discovers the urgency of a society without classes or divisions as a desirable, an achievable possibility (Adolfo Sánchez Vázquez). And that is due to the development of consciousness because, the world is, isolated oppressed within society. All the classes that in the past managed to become dominant tried to consolidate the acquired situation by subjecting the whole of society to the conditions of their mode of appropriation. Today we can only conquer the productive forces by abolishing the hegemonic mode of appropriation, and with it, all illegitimate modes of appropriation. We will only save what is salvageable and must modify everything that has been guaranteed by the engineering of dispossession. Our unity of networks and bridges must be a transition to a “New World Information and Communication Order”, that is, new means and ways to inform and communicate in a context of new relations of production.

But the specific form of such a unity of our forces must be the engine of the workers developed during their own struggles. It is a matter of ensuring that humanity ceases to be just another atomized commodity and meekly reproduces its own subordination. The raw material of the “bridges” is precisely that class consciousness ready to emancipate itself by building convergences of form and substance. Prioritizing principles without neglecting people. It is a praxis that is being meticulously transformed into an instrument of precision to deactivate the subjugation of all of us under the dominant economy. Unity will become essential only if its permanent evolution based on the supremacy of humanity over capital is guaranteed.

The priority of action is to build unity. Bridges and networks that, in turn, continuously develop until the correlation of forces and paradigms change. The cornerstones of our bridges or interconnections, in every sense, cannot be arbitrary, but rather concrete expressions of the social being that plans to emancipate itself. The issue of communication is so important and enduring that it cannot be left (alone) in the hands of ephemeral governments. Ultimately, if governments must define their communication policies, they must do so in organic collaboration with the democratic quality that the emancipated and emancipatory media know how to demand and impose as a real social force. But that by no means resolves the need for the most solid communicational task, which is the new transformed and transforming communication that does not depend on the semantic agenda of governments or bureaucracies but must assume its responsibilities and rights for its economic, technological and strategic development. That is the challenge.