Nine months after the Sacaba and Senkata massacres, the Center for Legal and Social Studies (CELS) denounced Bolivia’s de facto government to the United Nations for alleged extrajudicial executions and other human rights violations. The abundant evidence collected reveals that, in both territories, the armed forces and police savagely repressed the protests against the transitional government of Jeanine Áñez. The result was 21 fatalities and over 200 wounded. The violence in the streets continued in the hospitals: in the two events described as massacres by the Inter-American Commission on Human Rights (IACHR), the wounded and family members were harassed and humiliated by police and health personnel. The repressive apparatus implemented by the State reached the grotesque limit of throwing tear gas against the funeral procession of the victims’ relatives that descended from El Alto in the direction of La Paz. 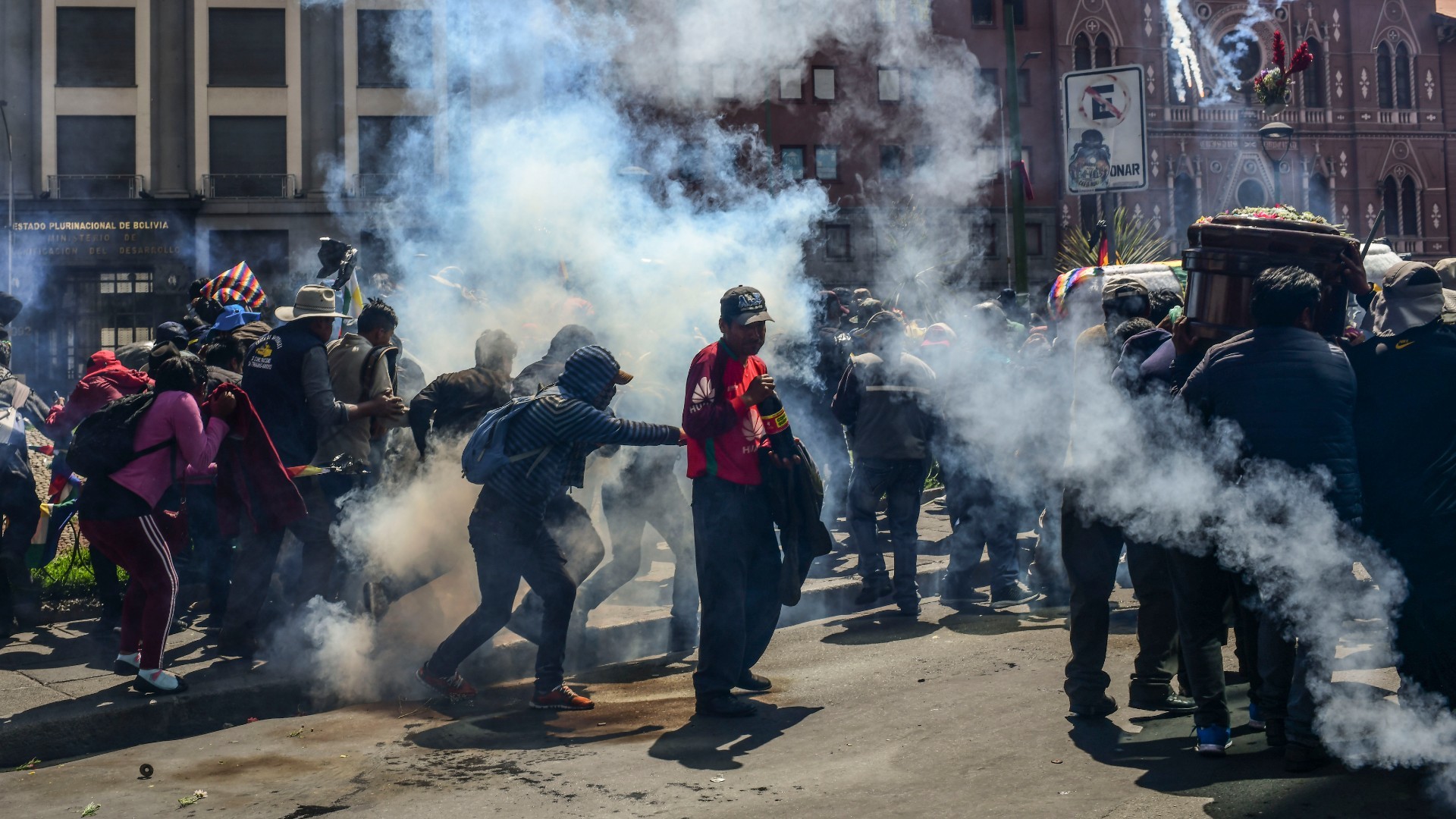 “The complaint by CELS, the Europe-Third World Center, the Association for Human Rights in Bolivia, the Andean Information Network and the University Network for Human Rights was presented on August 10. It presents a chronology of the events of the Sacaba and Senkata massacres based on a wide range of evidence,” says Camila Barretto Maia, CELS’s International Work Coordinator. “There is strong evidence of state responsibility in the executions and severe injuries caused to demonstrators and, as in the case of Senkata, to many people who were simply passing through an area with a lot of traffic”, adds Barretto Maia in dialogue with Página/12.

Both episodes took place in the context of the protests in the days following the coup d’état against former President Evo Morales on 10 November 2019 and the inauguration, two days later, of a transitional government led by former Senator Jeanine Áñez. A day before the Sacaba massacre, on Nov. 14, Áñez issued Supreme Decree 4078 granting immunity to the security forces to ensure the “restoration of order” in the streets. On November 15, the same de facto government issued Decree 4082 that allocated 42.7 million Bolivian pesos (US$6.16 million) to equip the military. The ground had been sown for the worst possible scenario.

The hunt unleashed on this populous city of Cochabamba took place on November 15, 2019 and left at least 10 dead and 120 wounded. The six Federations of the Tropic had decided to march to the city of La Paz in protest against the burning of the Wiphala, the persecution of the Pollera women and demanding the return of Evo Morales. The mobilization, which until then had been peaceful and led by women with children, was repressed with unusual violence. “The state forces had the support of at least one tank and a Neptune vehicle used to disperse the demonstrators with water, as well as a war plane and several helicopters flying at low altitude,” says part of the CELS complaint to which this newspaper was able to access. 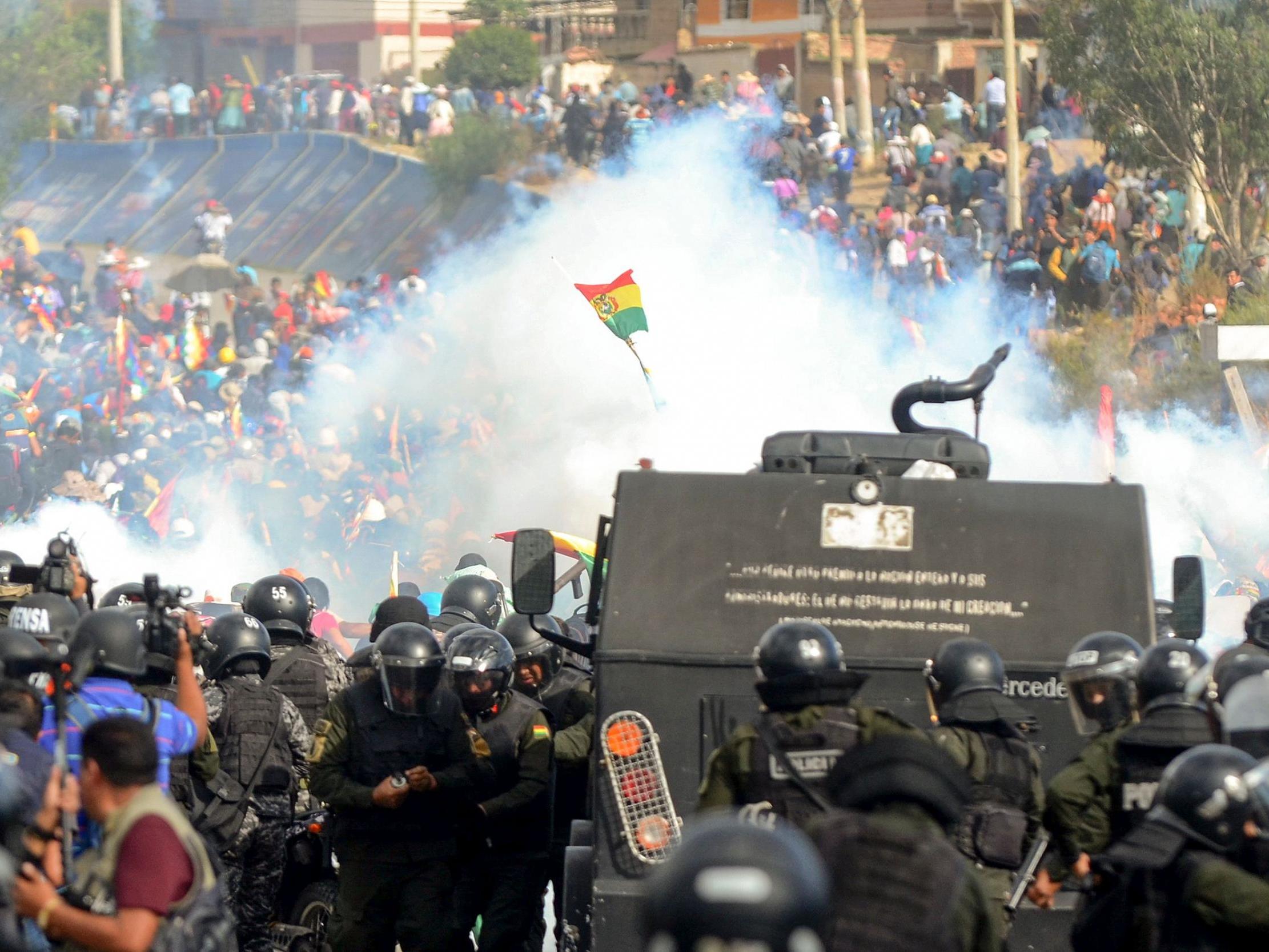 “The official version of the de facto government in the moments immediately following the massacre was completely fanciful. They promoted the thesis that the demonstrators had killed each other because they had been shot in the back,” says Barretto Maia. But the results of the ballistics tests revealed that the regulation rifles of the armed forces (FAL) were present on the day of the operation. The large number of wounded caused the local hospitals to collapse, which resulted in a new nightmare for the wounded and their families.

On Tuesday, November 19, 2019, the de facto government ordered the armed forces and police to break the blockade on the bottled gas plant located in the town of Senkata. After negotiating with those who maintained the blockade, the military and police forces managed, in an operation that included a convoy of 49 tankers, to transport fuel and gas cylinders to supply the cities of La Paz and El Alto. Even though the main objective was achieved, the military and police forces decided to occupy the plant and repressed the demonstrators who tried to retake the blockade with gas and lead bullets.

“Numerous testimonies confirmed that state forces were holding people inside the plant,” according to the complaint filed by CELS and other human rights groups. The claim that the demonstrators used explosives was never proven. “They accused the demonstrators of being terrorists for having broken down a wall that provided access to the plant, and they assured that the armed forces had not fired a single shot. But not only were there shots fired by the security forces, they were massive and indiscriminate gunfire against people who posed no threat,” explains Barretto Maia. The result was 11 dead and 72 wounded.

In both Sacaba and Senkata, the problems did not end after the repression by state forces. According to testimonies collected at the health centres, victims with serious injuries were harassed by doctors and nurses. “Low-income coca producing families have been living for nine months with considerable pain and permanent stigmatization by the authoritarian government that labels them narcoterrorists. The leaders are politically persecuted. They live in permanent fear of state reprisals and paramilitary motorcycle groups and they go hungry,” says Kathryn Ledebur, director of the Andean Information Network and also part of the complaint filed with the UN.

Despite the dubious version held by the de facto government, there are two cases open concerning the massacres: one in the Sacaba prosecutor’s office and the other in the city of El Alto. “Sacaba’s case initially included a complaint against demonstrators that was shelved for lack of evidence, and consists of an investigation into the murders and serious injuries of the demonstrators,” said Barretto Maia. In this case, ballistic tests were carried out at the scene. “We have unofficial information that this study would have proved that the bridge where the security forces were located was the source of the shots, but the report was never made public and it is not known whether it will determine responsibility because there was no progress in the case,” adds the coordinator of the international area of CELS.

In Senkata, the situation is even worse because no ballistics report or reconstruction of the events was ever made. “The armed forces refuse to share information with the prosecutor’s office about the operations planned, their commanders, the units deployed or the weapons they were carrying,” says Barretto Maia. “Nine months after the massacre there is no justice or recognition of the murders by the state,” said Ledebur from the Andean Network. The denunciation presented a few days ago is, in this sense, conclusive: “The international community must continue to demand truth and justice for the victims of Sacaba and Senkata and follow up on the human rights situation until democracy is restored in the country”.