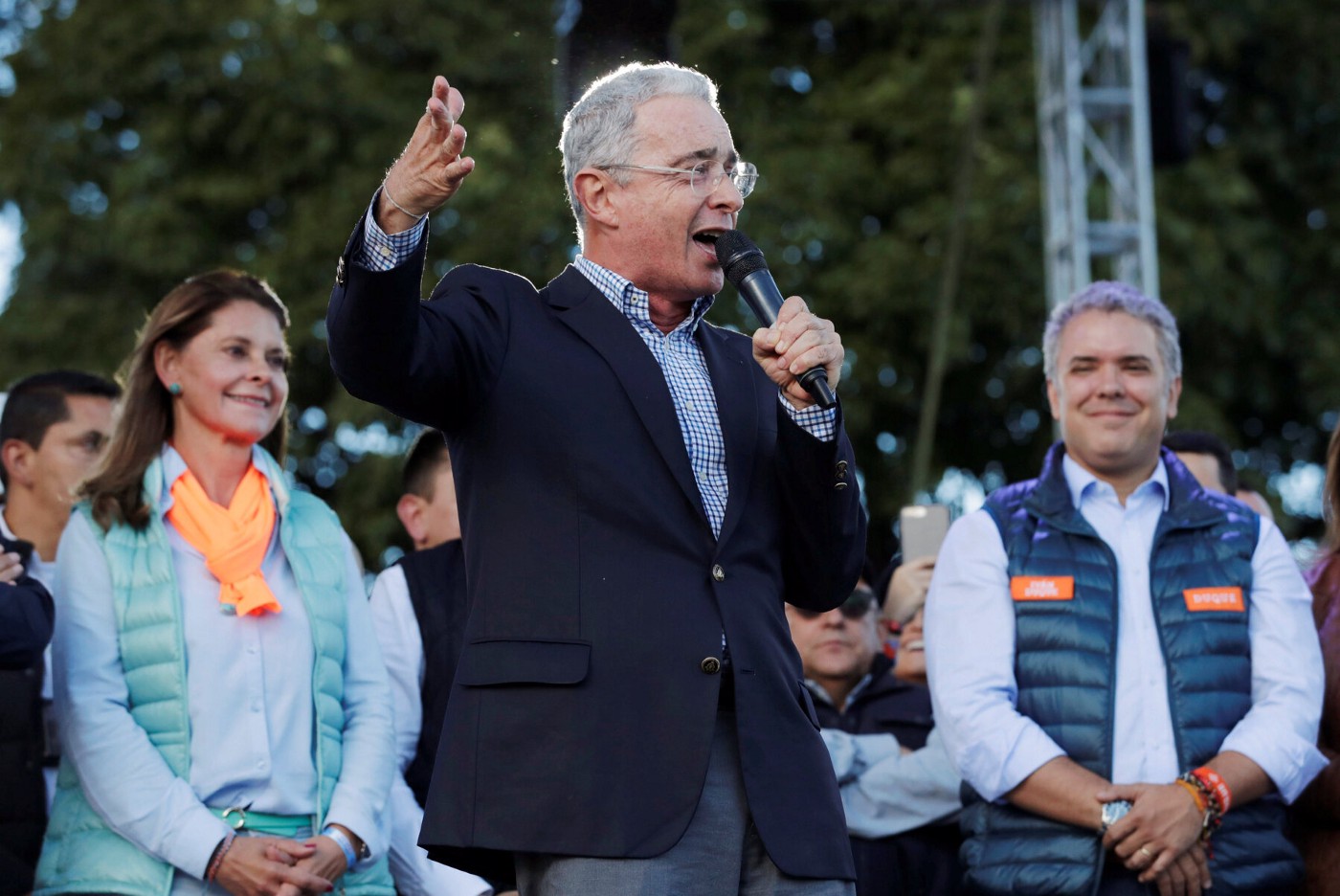 In Colombia, a unanimous decision by the Supreme Court of Justice has placed Senator and former President Álvaro Uribe Vélez under house arrest, an act that is a milestone in Colombia’s contemporary history and a cause of international uproar.

Uribe, who has more than 200 criminal proceedings against him for a long list of crimes, is accused of acts of bribery and procedural fraud in the case of “false witnesses” against Congressman Ivan Cepeda, a judicial process that earned Uribe a declaration before this Court in 2018.

The case for which he is being prosecuted

Remember that Uribe accused Senator Ivan Cepeda in 2012 before Colombia’s highest court of creating false testimony against him. This judicial instance is responsible for trying parliamentarians in the neighbouring country.

However, the Court did not find evidence against Cepeda but did find evidence against Uribe, who paradoxically fabricated testimonies about Cepeda and, in addition, bribed former paramilitaries prosecuted by the justice system (Pablo Hernann Sierra alias “Alberto Guerrero”, Juan Guillermo Monsalve, Carlos Enrique Vélez alias “Víctor” and Eurídice Cortés alias “Diana”) to protect himself and his brother Santiago, another criminal.

Iván Cepeda, a member of parliament for the Polo Democrático, was investigating Álvaro and Santiago Uribe for the events at the Hacienda Guacharacas, in Antioquia, which was owned by both brothers and would be the epicenter of the Metro Block of the United Self-Defense Forces of Colombia. The Uribe brothers were commanders of this paramilitary block during the government of Álvaro Uribe in Antioquia in the 1990s.

The Court called Uribe to appear in 2018 for the manipulation of witnesses and therefore, via Twitter, announced his resignation from the position of senator, in order to avoid being prosecuted by the highest court in charge of prosecuting parliamentarians.

However, two years later, and with a process that appeared to be administratively frozen, the Court ordered Uribe to be secured at his home and he will be prosecuted in that condition until a final sentence is handed down.

Alvaro Uribe’s record could be considered monstrous. The genocides of 11 June 1996 at La Granja and 22 October 1997 at El Aro during his term as governor of Antioquia and as paramilitary chief are a critical point in what would later be a long career in his insertion into the political life of Colombia at the highest levels.

The ascent occurred in the bloody 1990s, the rise of paramilitarism and drug trafficking and the intensification of the war against the guerrillas was the context in which the old oligarchies lost control of the territory, and in an ascending manner, the power of the Colombian state to govern the institutions and the country.

The war in Colombia had to take a drastic turn and such work was delegated to all the underlying elements in the criminal structures built in the shadow of the drug trade. The deep country was in the hands of armed paramilitary foremen, and men like the “Matarife” would follow. Men with one foot in the institutions and the other in the mud of cocaine and blood.

Uribe consolidated his rise to the presidency of Colombia by being part of a new wing of narco-paramilitarism. An ascending wing of power in Colombia that disassociated itself from the original family oligarchies and represented all the common senses of the aspirants and new emerging elites, built by the auspices of drug trafficking, capital laundering, smuggling and illicit trafficking across borders and a Colombia that was not as refined as the affluent areas of Bogotá.

Pablo Escobar’s passage through Colombian politics by winning a seat as Senator would be honed by Uribe to become President and even to form a tailor-made political sector through the Centro Democrático party.

Uribismo even reached the seat of the presidency again through Iván Duque, as the denominator of what is a much deeper structure.

The forms of political co-optation of drug trafficking have clearly structured presentations in the metabolism of the Colombian state and its powers.

It is not Uribe, it is not Duque; it is the whole. It’s the old class and the new class. It is the whole structure.

The struggle behind the scenes and what it can trigger

Uribe, the man of “las chuzadas” (the illegal interceptions of the DAS), the same man who murdered the social leader Jesús María Valle, the man of false positives and the most bloody systematic violation of human rights in Colombia, is the name that has been repeated in the history of his country over the last 20 years because he is omnipresent behind every small or large act of violence and commotion.

In the mid-1990s, the Vasco-Francés Mano Negra musical group recorded the video of the song “Señor Matanza” in Bogotá, with Manu Chao in the lead, referring to a dark man without a face, a hidden and silent criminal structure.

To Colombians in recent decades, that face became known and named on election campaign posters, dividing Colombia between approving or criticizing his methods, but with almost all of society giving him credit for them.

This earned Uribe the right to confront not only the Liberal Party and its leftist derivatives, but also the Conservative Party, where he harvested alliances and then enemies, among them Juan Manuel Santos.

An emerging power structure challenged the old class and this has become known in Colombian politics as a struggle between elites and an open political struggle, which seems to be a simple dispute between parties. But it is much more than that.

The fact that Uribe is being prosecuted for bribing witnesses to bring down Cepeda is a great sign that Colombia’s justice system, while working well in this case, is also about to swallow up the paramilitary leader for reasons that must be considered outside the criminal arena.

In other words, despite the overwhelming evidence that exists of crimes against humanity, murders, and the former president’s exact links to narco-paramilitary factors, Uribe is being prosecuted by a law firm, which, although quite serious, makes the situation look identical to that of Al Capone being tried for tax evasion.

It is essential to understand the unanimity of the Colombian Supreme Court’s decision as clearly agreed upon by the conservative elite, in order to finally put an end to Uribe and the powers and sectors he represents.

The manipulation of witnesses that this former paramilitary chief committed would not only point to Cepeda, but also to cover up his name for crimes committed more than 20 years ago, which implies that the result of this trial could trigger new charges and Uribe could be entering a judicial spiral.

Perhaps the judicialization of politics (lawfare), a growing phenomenon in Latin America, is taking a prominent place in Colombia in a process of open warfare by one narco-elite against the other.

For these sectors, there is no longer a buffer zone. Judicial institutions, which had served to delineate that the confrontation was only between the parties and the media, have now been instrumentally employed on the main leader of the emerging side.

This milestone underscores the probable blessing of the DEA and the US authorities on the events in Colombia. It is the gendarmes of both narco-states who have had a vassal in Uribe for operations against Venezuela and the consolidation of the U.S. military apparatus in Colombia.

They could be declaring Uribe useless and turning over a new leaf. They could be taking him out of the game to facilitate a readjustment.

This plot leaves no room for naivete. Thus, it is highly probable that Uribism will counterattack using the executive under its control (Ivan Duque’s government), and could thus unleash an episode of conflict of powers that could render Peru’s judicialized politics and institutions amateurish, due to the magnitude of Colombia, the size of its institutions, and even the enormous resources of the drug trade that are in dispute.

This could be a colossal conflict.

It could even awaken the not so old but perennial ghosts of the major political assassinations and terrorism that shocked the country in the 80s and 90s, although those that were in the framework of the “war on drugs” would be reissued today in a “war between the drug lords and paramilitaries”.

The events in Colombia will continue to be of interest because of their scale, and they must be observed in a dimension that is specifically tailored to them. The perplexity of this action against Uribe should not be understood then as the end of a cycle, but as the apex of this stage of the dispute for Colombia, which promises to be fraught with contradictions and crossroads.