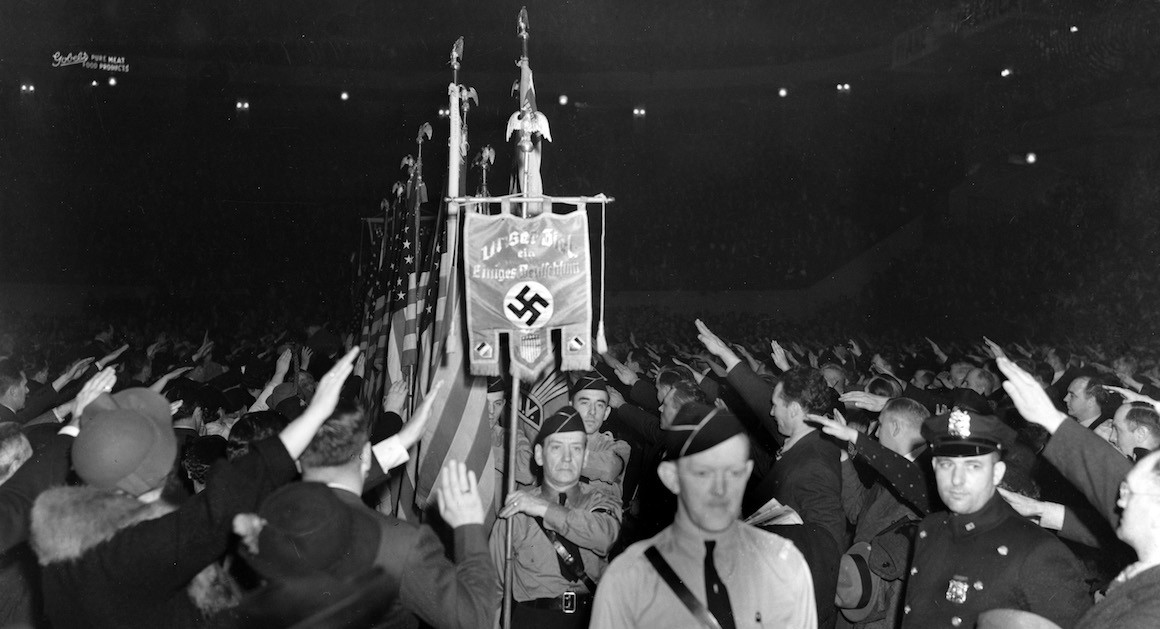 Why are we sliding into an American Nazism? Kristopher Âû answers this question in the following essay, which I helped write parts of:

A lot of people have been comparing what’s going on in Portland to a trial run for what is to come. No, this is not the case. The trial run has been the establishment of ICE, the establishment of the Department of Homeland Security, and the War on Terror. A lot of people seem to think that fascism is something completely unique, but fascism is nothing more than imperialism coming home.

America has been a fascist state since its very beginning, and throughout the last half-century it’s become increasingly fascist and begun its path towards reforming itself into the American Reich. It started with Nixon and his brand of authoritarianism. Angela Davis has a whole speech where she talked about Nixon’s fascism. Richard Nixon was the beginning of a long project by the American bourgeoisie. This project would be amplified by the propaganda of Ronald Reagan, with his aspirations to “make America great” and his claim that anybody can be rich as long as they’re willing to work for it.

Despite this more recent reality, I want to point out the obvious ways America has always been a fascist state. When the country began its project for “manifest destiny,” wherein it declared that only white men were free, the foundations for our present slip into a Nazi-esque paradigm were built. What happened during the Nixon era was the beginning of the shift into our current type of fascism.

You have to examine America’s history from a Marxist and anti-colonial perspective if you wish to see just how fascist America has been since its very foundation. Richard Nixon and Ronald Reagan represented the beginning of a new project to transform America into a Nazi state. Ronald Reagan’s propaganda was unprecedented; it drilled in anti-communist propaganda, fascist ideals, and core American founding ideals, which are all pertinent to Nazism and (yes) the beginning of neoliberalism. We also can look at Joe McCarthy and his anti-communist propaganda, starting back in the 50s.

Ronald Reagan was only the beginning of the neoliberal era’s fascistic paradigm. It continued with George Bush senior and his Gulf War in the early 1990s. His aggression towards Iran and Iraq set the stage for his son to begin a never-ending war, a key component towards the new foundation of Americanism. Then came Bill Clinton, the pinnacle of what would become of the Democratic Party-a bland, milquetoast, neoliberal party. He continued the deregulation of the banks and the wars of aggression in the Middle East. Then came George W. Bush, someone who I’m going to talk about in greater detail.

The attacks on the twin towers, to me, is similar to the burning of the Reichstag. The two have great parallels. Both were used as excuses to strip away human rights; in Nazi Germany with the Nuremberg laws and the emergency powers given to Adolf Hitler, and in the United States with the Patriot Act-which would be used to continue the erosion of civil liberties in America in the decades to come. Anyone who cannot see this is willfully blind, and completely ignorant of how fascism and ultranationalism work.

Reagan’s ultranationalism and neoliberalism would come perfectly into play after 9/11. This is because the event was used to proliferate the idea of “Bringing the country together,” which is a codeword for the universal acceptance of ultranationalism. Then came the War on Terror, the second consequence of the American reichstag. The American bourgeoisie used 9/11 to their advantage in almost every way. The war on terror gave America complete free rein in the Middle East, resulting in wars which would end up bringing about the murder and genocide of millions of Iraqis, Syrians, Yemenis, Pakistanis, and Afghanistanis.

The politicians continue to milk this post-9/11 ultranationalism dry, using it as a precedent to further erode our civil liberties and human rights. America used 9/11 as a rallying cry to boost its imperialism, a trend which has reached its most absurd and horrific point during the Trump era. After the recession, the Republicans would lose to Barack Obama, which supposedly promised great change but which furthered American exceptionalism by instilling the masses with false hope.

Barack Obama would implement the 2013 National Defense Authorization Act, and in effect would suspend Habeas Corpus indefinitely. He would build up a list of resources that could be abused by an even worse tyrant.

We are now entering the final phases of the plan that was put in place with Richard Nixon. Donald J. Trump would tap into ultranationalism, swinging America wildly to the far right. Trump would use this to its full advantage, starting his campaign with fascistic rhetoric. He only advanced the fascistic rhetoric as his disastrous presidency, rocked by scandal after scandal, became in need of a consolidation of authority.

Trump is now making full use of every power that was given to him by his predecessors. He is the product of decades of American brainwashing and half a century of American imperialism and exceptionalism. Trump is not just a symptom of the system, he is the product of a century of escalating imperialism and ultranationalism and the final product of the establishment of the settler colonial nation of America. Trump is as American as apple pie. Though Trump is most likely to lose the presidency in 2020, the one who will replace him is Joe Biden-one of the people who helped write the Patriot Act. He will be nothing more than another Barack Obama. He will continue to erode our human rights, and pave the road towards the eventual establishment of a Nazi state.

Who will lead this state is yet to be seen, but it is not too late to overthrow the system. It is not too late to stop the progress of American Nazism. We still have time to decolonize and overthrow the U.S., and establish a state led by its indigenous inhabitants. The decision of whether or not we’ll soon live in a Nazi state, or a state that is beneficial towards all of humanity, is yet to be seen.

Will you continue to partake in a system which is no longer democratic, or will you realize that the system is rigged and join revolutionaries who wish to overthrow and replace it within a system that is led by humanity? This is your choice. Will you continue to feed the system, leading to speakable crimes against humanity and the eventual destruction of the human race, or will you join a movement to liberate humanity? This is your choice, and your choice alone.