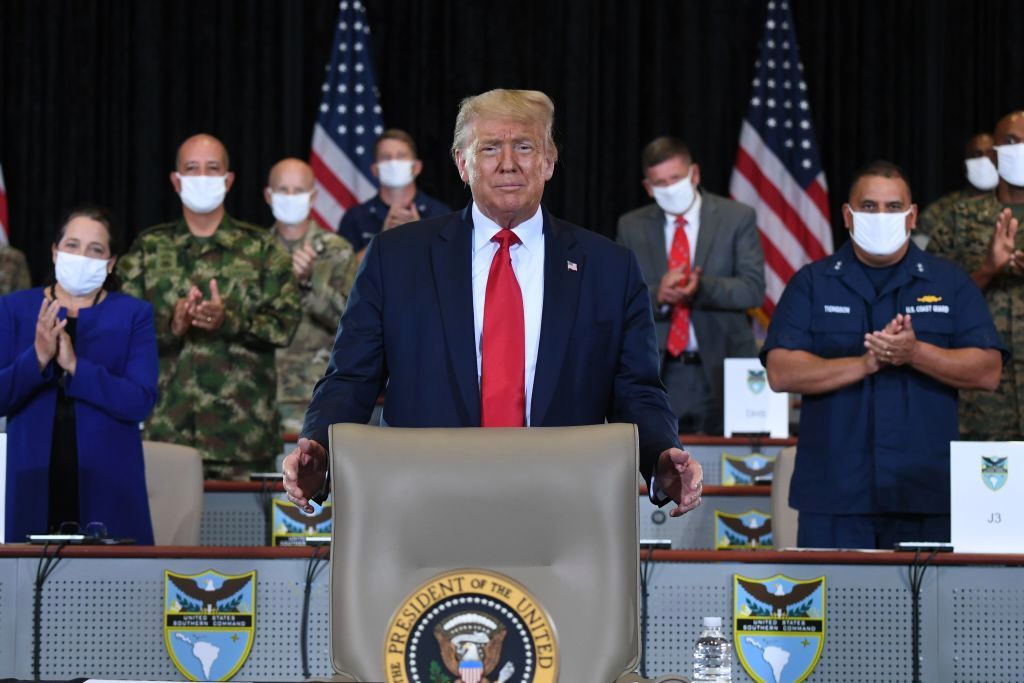 Trump had a meeting at the US Southern Command on Friday. (CBS Miami)

US President Donald Trump set his sights on Venezuela during a recent visit to South Florida.

“Something will happen with Venezuela. That’s all I can tell you,” he said in an interview with Noticias Telemundo on Friday, adding that Washington “will be very much involved.”

Despite voicing support for Juan Guaido, the US president expressed concern that the opposition leader “seems to be losing a certain power.”

Trump set a different tone during a round-table meeting in Miami-Dade County, home of one of the largest Venezuelan communities in the US. Alongside Venezuelan and Cuban opposition figures, Trump boasted about the “historic sanctions” imposed against Venezuela and claimed to “stand with the righteous leader of Venezuela, Juan Guaido.”

Since 2017, the Trump administration has imposed successive rounds of harsh sanctions against Venezuela which experts have described as “collective punishment” responsible for tens of thousands of deaths.

Guaido proclaimed himself “interim president” in January 2019 with immediate recognition from Washington and its allies. In the following months, he led several unsuccessful attempts to oust the Maduro government by force.

Nevertheless, Guaido has been caught in several corruption scandals and has seen his leadership within the opposition camp increasingly questioned, most recently after a failed paramilitary incursion on May 3 and 4.

Trump had expressed doubts about Guaido in the past, revealing in an Axios interview that he “wasn’t necessarily in favor” of the latter’s self-proclamation, while former National Security advisor John Bolton claimed in his memoir that the US president saw the opposition leader as being “weak” and called him “the Beto O’Rourke of Venezuela.”

However, with Florida a key battleground state in the upcoming presidential elections, the current administration is looking to boost its foreign policy credentials with the large Cuban and Venezuelan communities in metropolitan Miami.

Trump had kicked off the trip with a meeting at the Miami headquarters of the US Southern Command (SOUTHCOM). Trump thanked SOUTHCOM officers for their service and praised a recent anti-narcotics operation in the Caribbean.

The White House launched a military deployment targeting Venezuela in April, which was described as one of the largest in the region since the 1989 invasion of Panama.

Defense Secretary Mark Esper stated in the meeting that the operation had seized 120 tons in cocaine in three months, depriving traffickers of an estimated US $2 billion in profits. For his part, National Security Advisor Robert O’Brien echoed claims that Venezuela is a “narco-state” that has “flooded the US with cocaine for years.” However, data from US agencies shows that cocaine, which is mostly produced in Colombia, reaches the US mainly via the Pacific and Central America.