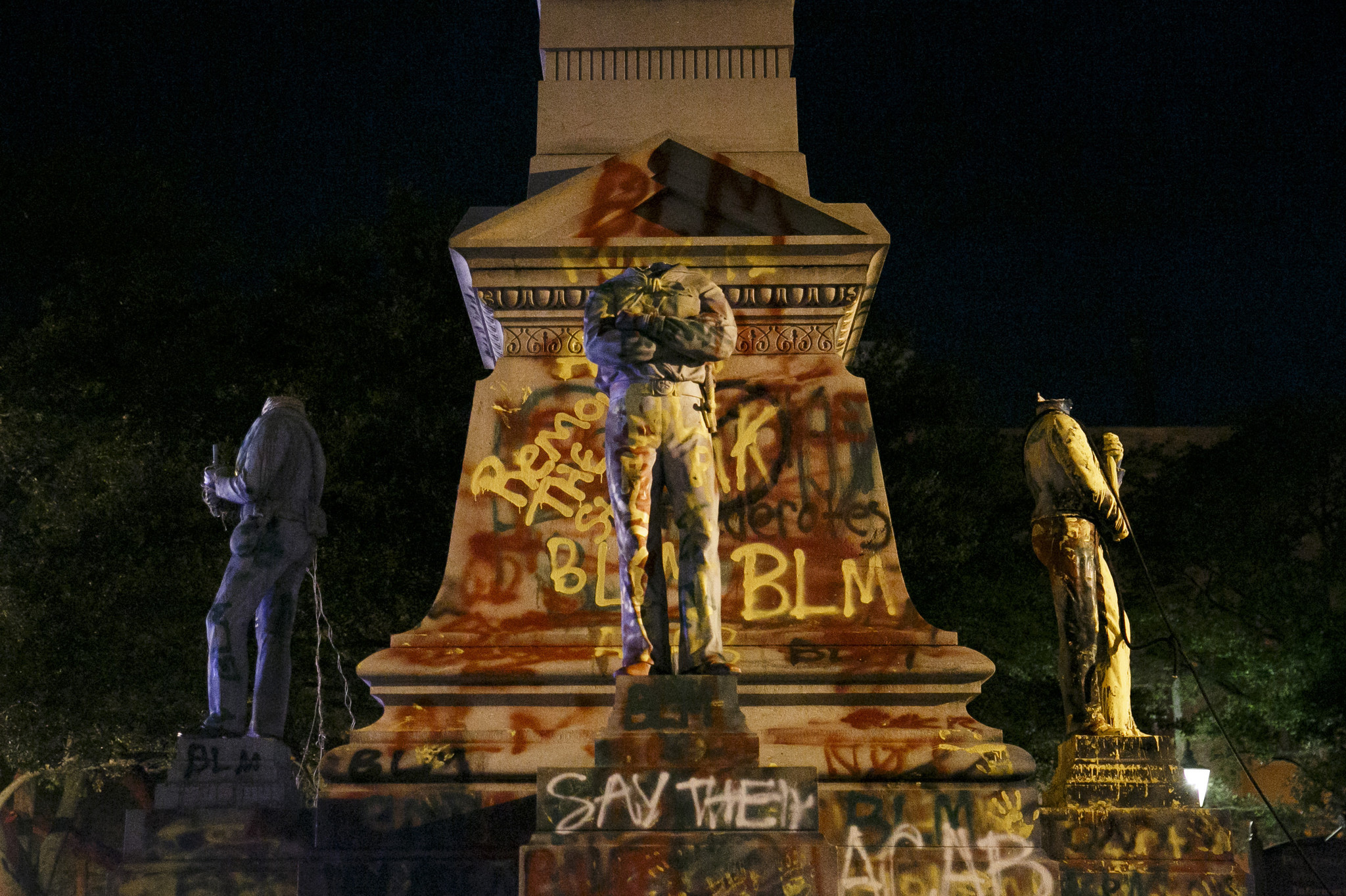 The protests that erupted in the wake of George Floyd’s murder, in the U.S. and other countries, have made visible a conflict that tends to go unnoticed: symbolic war. Demonstrators have furiously attacked enemies of bronze and marble, quiet and meek in appearance.

“It is an uncomfortable truth that our nation and city owes much of its wealth to its role in the slave trade,” said London’s Mayor Sadiq Khan, amidst debate over the anti-racist movement taking direct action to eliminate icons of colonial barbarism.

On June 7, in Bristol, a city in southwest England, the statue of slave trader Edward Colston was pulled down and thrown into the Avon River.

The likenesses of Robert Milligan and Cecil Rhodes, colonists and slave traders, were defaced. “Son of slavery” and “colonialist profiteer,” were the labels added by protesters to a statue in Edinburgh of Robert Dundas, second Viscount of Melville.

In London, near Parliament, the phrase “He was a racist” appeared on the statue of Winston Churchill, so idealized for his role in World War II. On another Churchill monument in Prague, the same uncomfortable truth was noted.

Boris Johnson accused “violent extremists” of lashing out at time-honored figures. “We cannot now try to edit or censor our past,” he said, “We cannot pretend to have a different history.”

British Interior Minister Priti Patel stated that these acts of “vandalism” were “a distraction from the issues that people are protesting. While Montserrat Alvarez rightly retorted: “The exact opposite is true: this reflects conscious awareness of the real historical reasons” for the events.

In Brussels, Leopold II, majestic on horseback, in Trône Place, greeted the dawn with anti-racist graffiti added: “BLM” (Black Lives Matter) and a denunciation: “This man killed 15 million people,” referring to genocide in the so-called Belgian Congo. In Antwerp and other cities, Leopold II was covered with paint and humiliated.

The U.S. is once again divided, as if a new Civil War had broken out, this time in the symbolic field.

Trump has rejected an initiative to rename military bases named after Southern officers who fought ruthlessly in defense of slavery.

But the statues of Generals Wickham (Richmond, Virginia) and Lee (Montgomery, Alabama), Jefferson Davis, president of the Confederate States during the Civil War (Durham, North Carolina), and racist journalist and politician Carmack (Nashville, Tennessee) were toppled. In Portland, Oregon, the bronze image of Thomas Jefferson, who signed the U.S. Declaration of Independence and was the country’s third President, fell to the ground, its base spray-painted with the epitaph: “Slave Owner.” Several local authorities in the South have proposed removing provocative racist monuments.

The genocide of indigenous peoples following the supposed “discovery” rests on the shoulders of Christopher Columbus. His effigies rolled to the ground in Richmond and St. Paul, Minnesota. One of his statues was decapitated in Boston, Massachusetts, while another in Houston, Texas, was covered in red paint. In Miami, Columbus and Ponce de Leon, the “discoverer” of Florida, were labeled with slogans denouncing racism.

House Speaker Nancy Pelosi, a Democrat, called for the removal from the Capitol of 11 statues honoring Confederate military leaders.

At the same time, white supremacist groups are mobilizing to defend the Confederate flag, their idols of this era, and the primitive machismo of their armed heroes.

The entire phenomenon is worth studying. Monuments and symbols have been destroyed before in different countries, associated with different historical periods, but never before has an assault on the past been seen on such a scale.

It has been said that statues become invisible with time; that people get used to their presence and stop wondering about their meaning. But anti-racist protesters have seen them and interpreted their message. One certainty stands out: the current capitalist system is built on centuries of colonialism, discrimination, abuse and millions of dead.