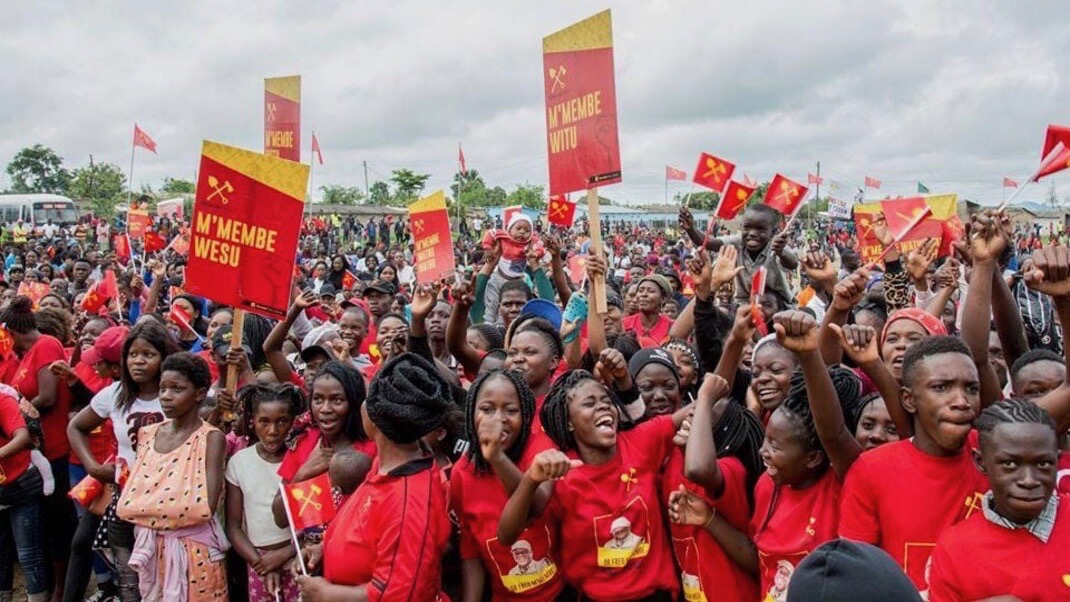 The Socialist Party of Zambia released its election manifesto on June 18, Wednesday, promising universal education and healthcare, as well as the expansion of housing and sanitation facilities for the masses

The presidential candidate of the Socialist Party (SP) of Zambia, Fred M’membe, released the party’s manifesto for the August 2021 elections at a press conference on June 18, Wednesday. “This is a manifesto for revolutionary change.. a manifesto that will release the power of ordinary people to transform this country,” said M’membe in his opening remarks.

The manifesto sets out the Socialist Party’s vision for transforming Zambia through universal education and healthcare, along with the promotion of cooperative farming that ensures the rights of peasants and workers in a socially planned economy. The party also expressed its resolve to reverse the deindustrialization process undergone since the neoliberal reforms introduced in 1991.

Vowing to eradicate illiteracy in 10 years, the manifesto promises free and compulsory education to all Zambians up to grade 12. The party has organized several literacy campaigns in the capital Lusaka since its formation in 2018.

“There will be no fees; uniforms, books, pens, pencils and school meals will be provided,” the manifesto states, and that “The Socialist government will provide state-of-the-art 21st century education. Computers, science laboratories, and quality teaching aids will pave a way for a science-based curriculum.”

Towards this end, if elected, the socialist government will allot 25% of the budgetary allocation to education.

Another 20% will be allotted to healthcare. The 2019 Global Health Security Index, published by the John Hopkins Bloomberg School of Public Health, ranks Zambia’s healthcare system at 152nd among the 195 countries included.

Apart from promoting and expanding the pharmaceutical industry, the party has also promised investment to “expand primary healthcare to include social care and mental health.”

Highlighting the need for reducing “the rates of undiagnosed and late-diagnosed HIV, ending the stigma of HIV in society, and promoting the increased availability of testing and treatment”, the manifesto promises to “expand sexual health services”.

As per the party, the expansion of healthcare alone cannot effectively improve the health of the masses. Millions of Zambians dwell in slums in and around the cities, lacking running water and sanitation facilities.

“The main causes of Zambia’s morbidity and mortality rates are water-related diseases; enteric fevers, dysentery, typhoid, cholera, amoebic infections, schistosomiasis, and many others,” the manifesto notes, adding that “Due to the poor state of water and sanitation, urban areas are prone to water-borne diseases that break out almost every year.”

The lack of access to adequate supply of clean water also imposes a disproportionate burden on women, who generally perform the task of fetching water from the limited sources available. Women are forced to spend a substantial portion of each day walking for kilometers and waiting in queues to draw water from common wells, many of which are dug next to latrine pits.

The manifesto thus promises “special attention” to the “safety and quality” of water, and expanding accessibility by providing multiple supply points across the country, so that “(n)o Zambian will have to walk more than 20 minutes to fetch water.”

Pointing out that access to sanitation has actually reduced in proportion to the population, the party blamed neoliberal policies for creating a situation where “nearly half of the population has no access at all.” The Socialist Party has also expressed its commitment to providing “100% sanitation coverage”.

Apart from water-borne diseases, a further toll is placed on the health of the masses, especially in slums and villages, because a “great majority of our people cannot afford concrete floors…. A mud floor is an incubator for breeding germs.”

The conditions in the slums – where entire families, often more than one, share small single-room shacks with no privacy for young adults – also affect mental and sexual health, the manifesto notes.

These problems will only worsen in coming years in the absence of a course correction due to the unprecedented rate of growth of urban population, which is, “(f)or the first time in our history.. higher than that of the rural population.”

Addressing these issues is not possible within a capitalist system, the party argues. “The Socialist Party in government will restructure town and country planning to favour construction of houses for the masses,” the manifesto states, to alleviate the problems of slums.

The party has also promised to undertake the construction of 50,000 low-cost houses each year, upon election.

Where is the money?

The small wealthy elite class in the country which benefits from the neoliberal exploitation “will tell you we are dreaming.. They will tell you it can’t be done. They will ask where will the money for all this come from,”  M’membe said in his address at the manifesto-launch.

The government representing this elite class is spending billions on “presidential jets and other luxuries”, including allowances, foreign trips, etc.

Questions regarding such expenditures are rarely raised, “because they are benefiting from this spending,” M’membe said. He added that though the program envisioned in the socialist manifesto requires large finances, “money is not the starting point” and can be found if Zambians take on the collective responsibility to ensure access to education, healthcare and other basic necessities for all. “The Socialist government will do what the individual households do when money is needed, when money is short: remove unnecessary expenditures,” he said.

The trimming of unnecessary expenditure in a socialist government will begin with those elected to its highest bodies. Additionally, a large portion of the wealth owed to workers, including by the National Pension Scheme Authority (NAPSA) and other pension funds, is “sitting in banks and being misused to build shopping malls and other symbols of wealth of little or no benefit to the workers,” as per the party.

It has been suggested that “Instead of leaving it up to individual profit-seeking capitalists and their agents in government to decide how this money ought to be invested, the working class should decide on a democratic basis where and how the wealth generated by them is invested.”

Zambia being primarily an agriculture-dependent country, the Socialist Party has prioritized protecting peasant agriculture against the assaults of agribusiness. This is to be achieved by promoting collective farms that are democratically controlled by farmers and agricultural laborers.

Introduction of technology and mechanization can increase productivity and reduce the physical labor required to run these agricultural collectives without leaving a large number of rural laborers dispossessed of their livelihoods. This is unlike in the case of corporate farming pursued for profit.

On the urban economy front, the party has committed itself to reversing the process of de-industrialization undergone since the introduction of neoliberalism in 1991. The removal of import restrictions and minimization of subsidies supporting local manufacturing has destroyed industrial production in many cities, while supermarkets are flooded with imported goods.

Production of public goods through public enterprises, in which trade unions will have a strong influence, forms the backbone of the Socialist Party’s vision for the industrial transformation of Zambia.

All workers are guaranteed equal rights “regardless of their employment status”, and for “trade unions a right to access workplaces, so union representatives can speak to members and potential members” has been promised. The party has also committed to the use of legislative powers to further promote unionization of workers and to “enforce all workers’ rights to trade union representation at work.”

The party’s government will also provide workers with disabilities “incapacity benefits, with payments varying according to the severity of the disability or illness.” Also, “skills training.. and affirmative programmes” will be made available for disabled workers.

The party intends to institute a “gender pay auditing” system to ensure that employers do not discriminate against women at the workplace and in the hiring process, in order to avoid having to pay for maternity leave, etc.

50% of the cabinet will be constituted of women ministers and equal representation at the highest levels of the government will be sought to effectively conduct gender auditing and combat the rampant sexual and domestic abuse in the country.

The Socialist Party is also among the few in the country which has laid stress on ensuring prisoners’ rights, and the need to reform the military apparatus by reversing the increasing focus on maintaining order and authority.

Instead, the party seeks to invest in better training and equipping the army to effectively contribute in the peacekeeping missions of the UN and the African Union, without taking the high number of casualties they are currently suffering.

Instead of serving as a market where arms-exporters can dump weapons, the party intends to transform the Zambian defense industry, promoting within it job creation and growth.

In its concluding paragraphs, the manifesto affirms: “We will fight for peace and stand against neo-colonialism. We firmly believe that the real and basic interests of the struggling people of the world are the same, and hence, we stand for proletarian internationalism and will support the causes of progressive popular movements wherever they emerge. International solidarity is in the best interest of our own struggle.”