Cuban Doctors went to Italy in March, during the peak of the pandemic in the country – Yamil Lage/AFP

Cuban doctors’ solidarity, once again, has gained the international stage. During the covid-19 pandemic, 1.8 thousand healthcare professional have been sent to dozens of countries. In response to the initiative, a Nobel Peace prize campaign to honor the physicians have been gaining more support each day.

Launched by the French organization “Cuba Linda” and by the France-Cuba Committee, the initiative proposes the recognition of the Cuban doctors’ brigade from the International Contingent of Doctors Specialized in Disaster Situations and Serious Epidemics “Henry Reeve”, which are now helping covid-19 victims in Venezuela, Nicaragua, Dutch Guiana, Jamaica, Haiti, Italy, Spain, among other nations. There are 21 groups widespread across the globe.

Established in September 2005 by Fidel Castro, the contingent has already saved thousands of lives in countries affected by earthquakes, hurricanes, and epidemics in different regions of Africa, Latin America, the Caribbean, and Asia.

The brigades have worked, for instance, in the Ebola outbreak in West African countries in 2014 and 2015. In recognition of these professionals’ work, the Henry Reeve brigade was the recipient of the Doctor Lee Jong-Wook prize in Public Health, given by the World Health Organization (WHO)

The campaign to support the physicians fighting covid-19 has already been supported by 20 European organizations since last week.

Among them, Ireland’s Cuba Support Group, Catalonia’s Communist Committee, the National Association of Italian-Cuban Friendship (Anaic by its Italian acronym), Spain’s Valencian Association of Friendship with Cuba “José Martí”, as well as the International Committee for Peace, Justice, and Dignity.

Besides Cuba Linda, other French organization have also joined the Nobel prize campaign, such as the Bolivarian Circle of Paris, Boca del Rhone’s General Confederation of Labour–Workers’ Force and the Revolutionary French Communist Party.

The initiative has been supported by the Parisian Solidarity Committee to Lula and Parisian Workers Party branch. 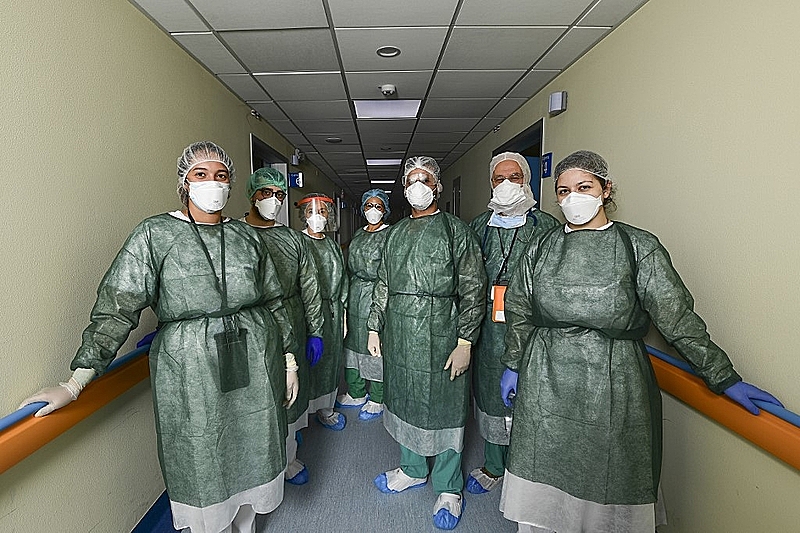 Cuban Doctors that have been in Italy for two months working at the Maggiore de Crema hospital, southeast of Milan / Miguel Medina/AFP

Graduated by the Latin-American School of Medicine (Elam by its Cuban acronym), the largest international Medical School in Cuba, the professional highlights the efficacy of the Cuban healthcare system model.

“What makes Cuban medicine so famous and admired is its preventive strategies and promotion of health, aiming at quality of life among the largest number of people, avoiding ailments and, whenever a person is sick, offering the most effective and steadfast possible treatment,” says Brosco.

She also reports that physicians who study in the island are sent to evaluate patients in a biopsychosocial approach, in other words, taking into account physiological, psychological, and social aspects. Professionals are distributed across all the regions in the country, which ensures that the whole population, without exception, has access to healthcare.

“Every student is taught to have  one mission only. Go back to their hometowns and take care of the vulnerable populations. There’s a deficit of 7 million doctors worldwide, with most professionals working in urban areas. The idea of the School’s project is to provide students with free education so they can go back to their countries and assist the portion of the population in most need of care,” she explains.

Also working at the Campaign Hospital in the Maracanã stadium, built for the population from Rio de Janeiro infected by the new coronavirus, Brosco underscores the global importance of the brigades during the pandemic, and in other moments of sanitary crises.

“They deserve the Nobel because of their generous, supportive, and combative contribution so many years since the revolution. The doctors have gone to over 600 thousand missions in many countries in the world to date. Which other country has sent doctors to so many missions? Cuba, with its limited resources, has contributed in the most supportive way to treat people who had never seen a doctor before,” states the family doctor, using Brazil as an example.

Before the More Doctors program, over 700 Brazilian municipalities did not have local physicians.

There’s no doubt that these doctors who have left their country to work in such remote areas are not doing it for the money, because that is not the issue, and they do their best, are the ultimate expression of what the medical practice should represent. Taking care of the other. Being supportive,” she adds.

Pedro Monzón, Cuba’s Consul General in São Paulo, denounces that even during the covid-19 outbreak, the United States and other countries allied to imperialism keep slandering Cuban doctors’ initiatives.

According to the diplomat, the American intervention has affected the collaboration in many Latin American countries, such as Bolivia, and Brazil under president Jair Bolsonaro, who has already criticized healthcare professionals many times, resulting in the withdrawal of Cuban doctors from the More Doctors program after his election.

“Now, with the pandemic, instead of underplaying, renouncing or stopping this campaign against Cuban Doctors’ work, these countries are being even more vocal and strong on the issue. The US government has spoken to countries that have asked for Cuban’s assistance, trying to avoid consortia and contracts involving Cuban doctors fighting the pandemic. This is a crime,” Monzón states.

The consul defends that rewarding the Henry Reeve brigade, whose long history of international cooperation sets a remarkable precedent, with the Nobel Peace Prize could help to stop persecutory actions from the US government and perpetuate their legacy.

“Honoring the brigade with the Nobel prize could help stimulate other countries and institutions to do something similar. To be supportive, to help other countries without imposing ideological, political, or economic standards. This is fundamental.”

Monzón also adds that the Nobel Prize campaign for the Cuban brigades is a way of showing that all of these professionals in the project, “have worked voluntarily, by vocation, conviction, and commitment to humanity”.

“To say that Cuban doctors are enslaved is an abomination, an enormous lie. To say that these doctors are guerilla members who engage in acts of terrorism, is a huge lie. A deliberate lie that intends to stop Cuba from cooperating with the world.”

Despite Bolsonaro’s criticism, due to the current Brazilian healthcare crisis, the government has recruited 150 Cuban doctors in the pandemic. The doctors who stayed in Brazil, after the majority of the professionals had already returned home by the end of 2018, have received a new license from the Ministry of Health to work in the country.

While in Brazil and in the US the number of people infected by the new coronavirus increases exponentially, Cuba is a role model in the fight against the pandemic.

According to the Johns Hopkins University pandemic dashboard, Cuba has had 1983 infected people and 82 fatal victims to date.

The government has recently announced the use of two medications produced the Cuban biotechnological industry have been reducing inflammation in severe patients that tested positive to the new coronavirus.

Healthcare authorities state that experimental treatments have helped to reach a general mortality rate of 4,2%. The index is lower in comparison to the regional and global averages of 5,9% and 6,6% respectively.

According to the Cuban government, one of these drugs is Itolizumab, a monoclonal antibody created in the Center of Molecular Immunology (CIM by its Cuban Spanish acronym) used to treat leukemia and lymphomas. The other one is a peptide that had been used in clinical trials for rheumatoid arthritis.

However, despite these positive results, Cuban scientists stress that larger controlled studies with placebos are yet to be developed in order to guarantee the safety and efficacy of the medications.

In Rio de Janeiro, working directly with covid-19 victims, Daniela Brosco has brought with her all the baggage that she learned in the island, which goes beyond the academic world. “One of the things we heard a lot, and that Fidel used to say, is that Cuba educates doctors of science and consciousness. I will never forget that.”

Code Pink, an international organization that exposes US abuses of power and fights for peace and social justice, is also launching a petition in favor of the Nobel Peace Prize to the Cuban doctors’ brigade. Up until the moment, almost five thousand signatures have been collected.

According to Jodie Evans, co-founder of Code Pink, the NGO has led a campaign called “a New Good Neighbor Policy”, which combats US government violence against Latin American countries. For her, the Henry Reeve brigade is a role model of how “to be a good neighbor for the whole world”.

“Cuban doctors have already been to more places than World Health organizations, but nobody talks about that. And nobody speaks of the horrendous sanctions shoved down Cubans throats by the US,” the activist criticizes.

Evans underscores her admiration for the doctors who are in the field during this pandemic, while so many are in social isolation. “We have an example of this country’s beauty, these doctoras, the work they do and how they are engaged. Of the lives they save, understanding more about the virus and helping to defeat it. That is what the world needs now. Cuban doctors are an example of why and for whom the Nobel Peace Prize was created”.

The organization expects the petition to circulate all around the globe. “I’m collecting signatures and nobody says no. It is so obvious and true. The Cuban doctors’ work show the world we want to live in. A kind and generous world. It is the construction of a world of peace and collectivity, where instead of wars and weapons, we celebrate caring for each other, camaraderie, and kindness,” Evans concludes.