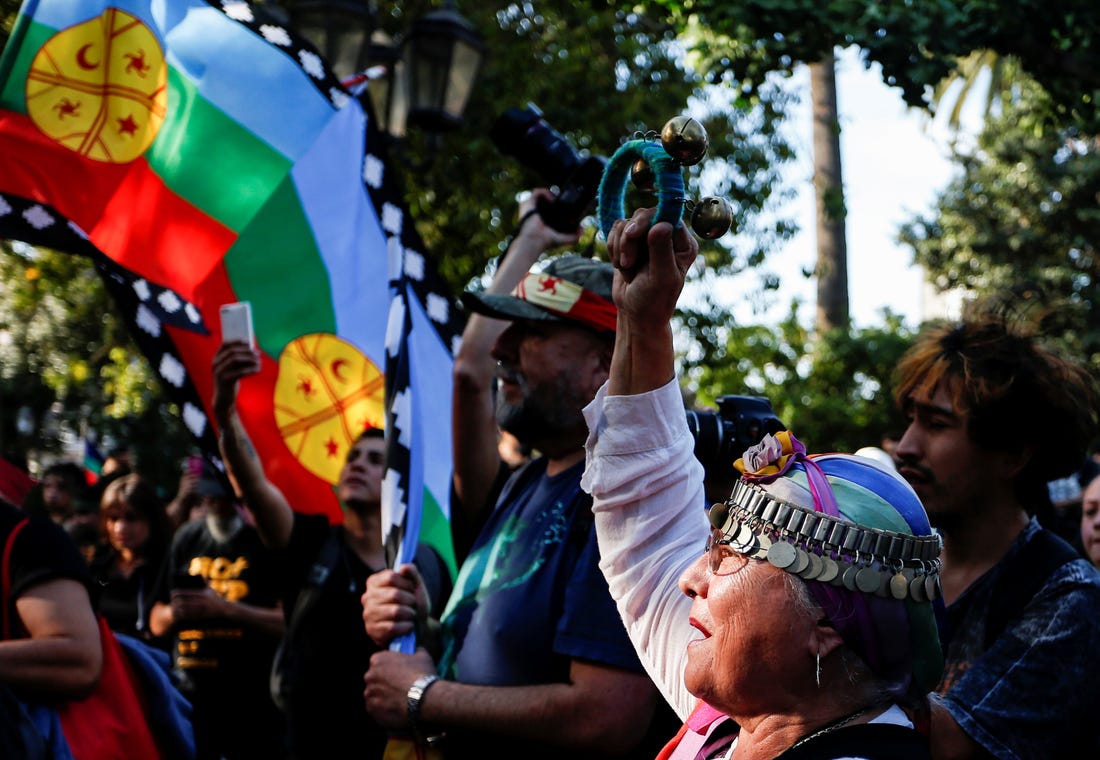 Businessman and President of Chile, Sebastián Piñera Echeñique, criticized and denounced by various international human rights organizations for the systematic violations of human rights in Chile, particularly in the face of the well-known rebellion that began on October 18, 2019, and for the constant repression of Mapuche communities, recalled in his address on May 21 during “Naval Glories Day”, former President, Anibal Pinto, who is accused of genocide and of being politically responsible for several massacres of the Mapuche people, as well as of the southern peoples.

Piñera made the statement on May 21, which commemorates the “Heroes of Iquique” and particularly Captain Arturo Prat Chacón, within the context of a war known as the “war of the Pacific” or “the saltpeter war”, a war between the states of Chile, Peru and Bolivia, which was unleashed in ancestral Andean territories which involved the collaboration of British businessmen and the British imperial power, he said: “Today, when our country and the world are going through very hard and difficult times, I would like, recalling President Aníbal Pinto, to give a message of faith and hope and ask for the unity and collaboration of all our compatriots”.

Aníbal Pinto Garmendia came from one of the most prominent families of the Chilean aristocracy of the 19th century. He was the son of the lawyer, general and former president of the Republic, Francisco Antonio Pinto and the Argentinean aristocrat, Luisa Garmendia Alurralde. Pinto was president of Chile between 1876 and 1881, a period that not only triggered multilateral warfare and British interests, but also intensified the Bío-Bío military campaigns in the south, resulting in state massacres of thousands of Mapuche people. Historian Hernán Curiñir points out that during the so-called “Pacification of Araucania”, between 50,000 and 70,000 Mapuche people were murdered by the army, most of them during the Pinto government.

The government of Pinto coordinated military actions with its Argentinean counterparts, Nicolás Avellaneda and Julio Argentino Roca, in order to carry out the dispossession of Mapuche territories on both sides of the mountain range, also with the support of the British Empire, materializing a treaty of boundaries to establish demarcations and new borders in July 1881, signed by Pinto and Roca.

Pinto, also propitiated the “Southern Colonization”, which generated the genocide of Peoples such as Chono, Selknam, Kawasqar and Yagán, under policies of tolerance by giving land to foreign colonists in exchange for the mass murder of native peoples.

According to government message No. 663-368, dated 12 May 2020, President Sebastián Piñera, Ministers Gonzalo Blumel, Hernán Larraín and Teodoro Rivera submitted to Congress a bill amending the agreement signed by Chile that granted legal recognition to the International Criminal Court, based in The Hague.

According to independent media such as Interferencia and El Clarín, the political move is intended to delegate to Foreign Minister Teodoro Ribera the power to accept or reject the jurisdiction of the International Criminal Court, a role that the Public Prosecutor’s Office is currently playing. This move has been denounced as a manoeuvre to evade responsibility for crimes and offences committed in the field of human rights.

Official figures from the Prosecutor’s Office at the end of January 2020, reported 31 deaths during protests, which would have continued to increase. Likewise, the official report released by the National Institute of Human Rights for the period from 18 October 2019 to 18 February 2020 reported a total of 3,765 people injured (including 439 women and 282 children and adolescents) and 411 eye traumas. Of the 2,122 gunshot wounds, 500 were bullet wounds, 190 were ballistic wounds, 271 were tear gas wounds, 1,681 were pellet wounds and 200 had no identified cause. The INDH has filed 1,312 legal actions with little progress, including 5 for homicides committed by State agents;195 complaints for sexual violence (rape, among other abuses) and 951 for torture.