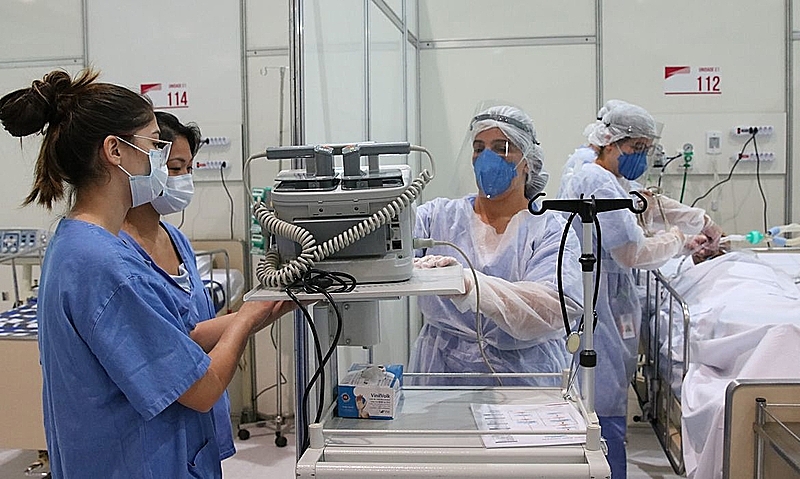 The state of São Paulo is the epicenter of the covid-19 pandemic in Brazil: with a total of 2.627 deaths and 31.772 cases of infection, according to data released on Sunday (3) by the state´s Health Department.

The information also relates that the occupancy rate of Intensive Care Units (ICUs) in the São Paulo metropolitan region, went down slightly in relation to Saturday (2): from 87,5% to 87,1%. Across the state, the number is 66,2%.

Marcos Boulos, an infectious disease expert, says that even though there was a slight decrease, the occupancy rates in hospitals is rising overall and will soon reach a breaking point.

“This will happen because the absolute numbers continue to rise. We will probably face a collapse in regards mainly to the availability of ICU units. It won’t take long for this to happen”, affirms Boulos.

On Monday (4), there were a total of 9,100 hospitalized covid-19 patients, of which 3,534 were in ICUs. The state of São Paulo has informed the population that the mortality rate in those below 60 went up 18 times over the last month. Out of the deceased, 693 were below the age of 60.

In a press conference on Monday (4), São Paulo state governor João Doria, stated that were it nor for the measures restricting social interaction, “we would have had many more cases, around 26 thousand deaths in São Paulo alone”.

“We’ve had some good numbers, but we continue to trust and ask the residents of the state to protect their lives and stay home. Let us not reproduce the dramatic scenes we’ve seen coming out of Manaus, the capital of the state of Amazonas (where people are being buried in mass graves), with their healthcare system in collapse, despite the best efforts on the part of the mayor”, warned the governor at the press briefing.

Considering the data, though it may be difficult to estimate when the peak in the number of cases and deaths will arrive, doctor Marcos Bouloss believes that São Paulo isn’t far from this moment. “We are speaking of a decline in the relative percentage of the rise in cases. It is clear they are still going up [at a slower rate], and thus the overall total is still increasing”, explains the physician.

In relation to other states, São Paulo shows the biggest regression in the curve of infectioins. Right at the outset of the epidemic, there are few registered cases which go up as time goes by, until reaching a huge concentration in the middle of the outbreak, to then start declining.

In São Paulo, more so than other states, this concentration of cases has been spread out over time. “The curve is flattening more rapidly here in São Paulo than in other states. However, since our population is much bigger and the disease started here, we have more total cases than other places”.

How are local authorities responding?

São Paulo mayor Bruno Covas, sanctioned a law establishing a series of measures aimed at protecting the public healthcare system and social safety nets during the coronavirus crisis. An example of this is a new rule allowing public hospitals to make use of private hospital beds. The objective is to use 20% of those available in the private sector, around 800 beds.

The law also authorizes making hotel beds available to health professionals, homeless citizens and women who have suffered violence; as well as reserving the first hour upon store openings to serve those who are older than 60.

Since Monday (4), mayor Covas made the use of face masks on public transportation mandatory. The decision only reinforced the announcement by state governor João Doria, who is making the use of masks mandatory statewide beginning May 7th. Enforcing the new rules and eventually punishing those who break them will be the responsibility of municipalities.

“These measures are obligatory, but I am certain that you the citizen, will be responsible and use masks, as well as tell your family members to do the same, you are protecting your lives, and those of your family, friends and neighbors”, proclaimed governor Doria.