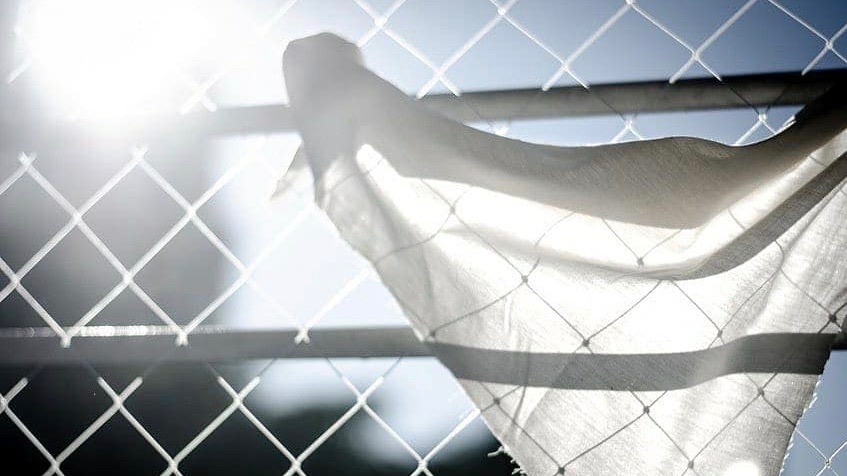 Tens of thousands of people placed white handkerchiefs on their windows, balconies and doors to pay homage to the victims of the dictatorship and demand justice for them. Photo: @abril.pereztorres

This March 24 marked 44 years since the US-backed military coup was carried out in Argentina and installed the bloodiest dictatorship in the history of the country. In 2002, the Argentine Congress declared that this tragic day would be remembered as the National Day of Remembrance for Truth and Justice. In 2006, it was declared a public national holiday in Argentina.

On March 24, 1976, a right-wing coup overthrew the constitutional government of Isabel Martínez de Perón and replaced it with a military junta, headed by General Jorge Rafael Videla, Admiral Emilio Eduardo Massera and Brigadier-General Orlando Ramón Agosti. The regime remained in power until the return of democracy in the country on December 10, 1983. During the seven years of dictatorship, over 30,000 students, activists, trade unionists, writers, journalists and artists were kidnapped, tortured and disappeared.

Since 1986, every year, on March 24, hundreds of thousands of citizens, relatives of the disappeared people, members of several social movements, human rights organizations and political groups of Argentina march to the Plaza de Mayo in Buenos Aires to remember the 30,000 disappeared people and demand justice for the crimes against humanity committed by the State.

However, this year for the first time in 37 years, due to the global COVID-19 pandemic that forces us today to stay in homes, the annual ritual was interrupted. In recognition of the need to comply with the mandatory quarantine established by the government, the plaza and the streets were empty, but Argentines paid homage to the victims from their homes and social networks.

A virtual march was held on social media to honor the victims of the enforced disappearances and their revolutionary spirit. Since the early morning, the photographs of the disappeared people flooded social media with phrases such as “memory, truth and justice”, “we don’t forget, we don’t forgive”, “30,000 present”, “never again”, etc. Thousands of people posted their pictures with white handkerchiefs, which is a symbol of the struggle led by the mothers and grandmothers of the disappeared people to bring their missing loved ones back home. The hashtag #PañuelosConMemoria (#HandkerchiefsWithMemory) trended on facebook, instagram and twitter. Tens of thousands of people placed white handkerchiefs on their windows, balconies, doors and walls.

The annual speech by the human rights organizations, such as the Grandmothers of Plaza de Mayo, the Mothers of Plaza de Mayo, Relatives of the Disappeared and Detained for Political Reasons and the Sons and Daughters for Identity and Justice against Oblivion and Silence (HIJOS) that were formed as a response to the state terrorism and repression during the dictatorship, was broadcast live on social networks. The measure was called for by these human rights organizations and 13 others under the slogan “There will be no march, but there will be Memory.”

“Today we are in our homes, but fighting and reclaiming the 30,000, following their examples,” said Taty Almeida, a member of the Grandmothers of the Plaza de Mayo.

“Crimes against humanity harm all humanity, which is why states have an obligation to investigate them and should not let them go unpunished,” stressed Iris Avellaneda, of the Argentine League for Human Rights.

The organizations recalled the denial of the five years of former right-wing president Mauricio Macri’s government and supported the initiatives announced by current progressive president Alberto Fernández on the reform of the Judiciary as a sign of achieving “greater speed” in trials for crimes against humanity.

President Fernández also expressed his respect for the tradition, whose party has always been a part of these mobilizations. “The preventive and mandatory isolation prevents us from leaving today in order to take care of ourselves. But it doesn’t stop us from remembering. This March 24th, from our homes, we still raise our handkerchiefs for memory, truth, and justice,” tweeted the president with a video.

The period of the “National Reorganization Process”, a name used by the dictators for their government program, was marked by all forms of state repression and terrorism. Thousands of political dissidents and anyone believed to be associated with socialism, left-wing activism or contrary to the neoliberal economic policies dictated by the military government were hunted down. The armed forces detained, tortured and murdered thousands of civilians. They even seized their property, their babies -whose identities remain unknown- and tried to erase the story to write their own. Several perpetrators of these grave crimes have not yet been brought to justice.

The Grandmothers of Plaza de Mayo, the Mothers of Plaza de Mayo and the Relatives of the Disappeared and Detained for Political Reasons have been at the forefront of the struggle demanding justice and reparation for the cases of enforced disappearances, torture, murder as well for the systematic theft of newborns and other crimes against humanity. Around 500 children, who were detained with their militant parents or born in captivity, were appropriated as war trophies by the repressive forces and handed over to military families, sold or abandoned in state institutions. So far, the true identities of 129 grandchildren have been recovered.

In this regard, Estela de Carlotto, president of the Grandmothers of Plaza de Mayo, lamented that “with each passing year it is getting more difficult to find them.” “We need all of us to commit ourselves to supporting the difficult process of those who are in doubt of their identity. The moment is now for them to find the comforting embrace of the relatives who have been looking for them for 40 years,” stressed Estela.