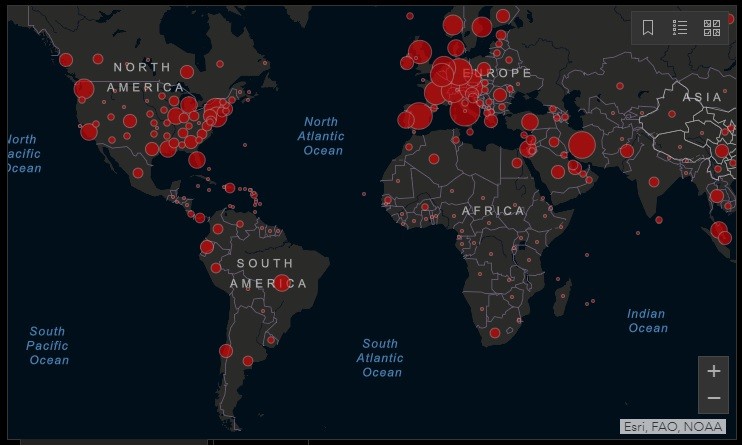 At the moment, the figures of infections and cases of death caused by the fatal Corona Virus 19 are certainly very serious. In cold numbers, the World Health Organization (WHO) made it clear: “It took more than three months for the pandemic to reach its first 10,000 victims. Now, in just 12 days, there are more than 100,000 infections.

In other words, a terrifying acceleration. But beyond the known figures, international medical organizations emphasize their fear of a “silent epidemic”, spreading undetected through much of Southeast Asia, sub-Saharan Africa and Latin America.

This would be an as yet unquantified mass of Covid-19 infections that are not recognized because of a lack of medical capacity or also, sometimes, because of politicians’ fear of recognizing the seriousness of what is happening. A mass of carriers of the virus that can reach hundreds of thousands or millions of people.

Apart from these fears, there is also distrust of official information provided by governments and international health organizations. Particularly because of the apparent disproportion between the pandemic, which does not lethally affect more than 2 per thousand of those infected, and the catastrophic collapse of the world economy and politics.

What many people are afraid of is that a large part of the real danger affecting us is hidden… and that it has little to do with the almost total paralysis of the very system of daily life throughout the world.

In reality, a multitude of threatening factors had been accumulating that had little to do with a pandemic threat… despite the mysterious precedent of last year’s sudden viral epidemic that attacked pigs in China alone, and which caused the death of millions of these animals.

More disturbing was the situation in Western Asia or the Middle East, especially in Syria and Iraq, where the United States, outside all legality, seized the oil fields, while rejecting, in a threatening tone, Baghdad’s demand to remove its military bases which, in fact, are operating as occupying forces.

Turkey’s intervention to militarily protect the mass of Turkmen inhabitants of northern Syria triggered a new crisis of tens of thousands of illegal immigrants desperately trying to enter Europe.

Meanwhile, a suspicious price dispute between the world’s largest oil states, Russia and Saudi Arabia, unexpectedly caused a sharp drop in the price of oil, which reached only $20 a barrel and left U.S. oil production, which costs $30 to extract, bankrupt.

At the same time, in Europe there was an unexpected strengthening of the nationalist ultra-right and unwilling to accept the discipline of the European Union (EU), while the general political tone in the continent was oriented towards a defiant position vis-à-vis the United States, both economically and militarily.

And, as if that were not enough, the leadership achieved by China in both economic growth and technology, including Huawei’s obvious superiority in the field of 5G communications worldwide, was evident.

Already last January, economic analysts were agreeing on a gloomy chorus of bad omens for the world economy, including not only a possible recession, but a widespread economic depression.

And, of course, the neoliberal formula of total divorce between companies and governments had already been replaced by world trade subject to sanctions imposed by the United States.

It was under those circumstances that, boom, boom, the new Corona Virus epidemic broke out in the very heart of China, around the great city of Wuhan and affecting 60 million people.

The blockades, isolation and curfews, accompanied by fear of contagion, not only altered the way of working. It also altered people’s sense of individual security, prompting them to return to seeking protection and assistance from the state. In other words, this was a 180-degree turn from neo-liberal euphoria.

The large transnational corporations in banking, oil, pharmochemistry and communications technology, which raged against any attempt by the State to plan or regulate the economy, are now rushing in, trying to grab as much as possible of the immense state investments facing the pandemic.

In other words, human beings and legal entities are now appearing very much as equals, extending their hands and hopes to the state, to the political class.

What many people are afraid of is that it conceals a large part of the real danger that is affecting us… and that has little to do with the almost total paralysis of the entire system of daily life throughout the world.

Map of the pandemic

The Chinese government’s measures to control the epidemic were spectacularly successful, and were immediately replicated in South Korea. In both countries the epidemic was curbed to the extent that they were able to report zero new infections last week. Only in Hong Kong was there a spike in some cases, but this was limited to people arriving from abroad. Many of them had been infected in the United States.

In contrast, in the Middle East, especially in Iran and Israel, the coronavirus pandemic broke out brutally. It then spread to Greece and Italy and crossed the borders of Spain, France, Great Britain and several Eastern European countries, Estonia, Latvia, the Czech Republic and Hungary, among others.

In the United States, the first infections appeared on the Atlantic coast, and in fact did not provoke a strong reaction from the government. Rather, Donald Trump was skeptical of what he called “the Chinese virus”.

But the contagions multiplied rapidly to over 19,000 last Tuesday, causing a blockade and curfew on 70 million Americans.

In the most decisive states, New York and California, the blockade and isolation of people immediately caused a labour crisis, total or partial paralysis of companies, suspension of classes, with the estimated cost of 23 million jobs that are at risk of disappearing in the very short term.

According to the specialized publication Market Watch, in the week of March 15-21 alone, there were an estimated three million new applicants for unemployment assistance.

The White House’s reaction, although late, had a strong impact on public opinion. President Trump presented Congress with a bill to send direct financial assistance to the population, by means of checks for 1,500 dollars to those affected and, in addition, assistance for several thousand dollars to small businesses and businesses in a situation of paralysis or bankruptcy.

The bill is under accelerated debate in Congress, and it is estimated that it will represent an additional cost of more than one trillion dollars, to be paid with money issues against government sovereign bonds.

At the same time, the Federal Reserve ordered a reduction in the interest rate for financial credit to 0.025 %. In other words, nothing at all.

Together with that investment to help workers and small businessmen, the Trump Government allocated over 600 billion dollars for health implementation and pharmochemical research.

On top of those formidable funds, there was the alleged attempt by Washington to finance research by one of the main pharmochemical industries in Germany, under the condition that the results were patented as the exclusive property of the United States.

According to government spokespersons, the planned relief measures will inject about two trillion dollars ($2 trillion) to revive the economy.

Meanwhile, of course, the U.S. banking industry immediately began lobbying, with the aim of getting Congress to reject Trump’s proposal to send the aid directly to the people. Instead, the bankers point out that those funds should go to the banking institutions that know best how to negotiate credit and loans to people and small businesses.

Similarly, the digital newspaper The Intercept revealed last Friday that banks are putting pressure on pharmacists to raise prices for coronavirus protection products.

Specifically, it denounced the case of the pharmochemical company Gilead Sciences, which produces the drug “Remdesivir”, which reduces the symptoms of the coronavirus, and which is also used to reduce the symptoms of other serious diseases such as dengue, the Nile virus, Zika and varieties of influenza.

The pharmacist, whose research has received major financial support from the government and the University of Alabama, has patented Remdesivir as a property of its California headquarters.

In these operations, the pharmochemical company Gilead Sciences has obtained revenues of 2.5 billion dollars.

Compared to the plundering of the banks and pharmaceutical companies in the United States, European governments have imposed rigid controls aimed at guaranteeing low cost and good service for the people. For example, in Spain the government took immediate control of all health-related businesses, including private clinics and hospitals, in order to provide maximum care for coronavirus patients.

The pandemic actually revealed how fragile and unsafe the very basis of society was in the developed world, and even more so in the underdeveloped world.

We do not yet know when and how the Covid-19 pandemic will end. But it does seem clear that when the plague ends, the decline will follow. We will have to stake our bets with a new hand, which means that the current political class, corrupt, servile and ignorant, will have to make way for a dramatically new system.

In some European countries, as in some Latin American countries, anger, resentment for the ineffectiveness of governments is producing ultra-nationalist impulses, very close to Nazi ideology. These movements believe that political corruption proves that democracy has become incapable.

In fact, governments such as those of Hungary, Latvia, Austria and Romania, among others, are unwilling to abide by the guidelines of the EU, to which they belong, and instead seem intent on putting an end to globalism.

However, the main opinion polls confirm that a strong majority of people, in Europe, in the Eastern countries and in America, understand that effective globalization of law, education and reasonable trade between nations around the world is indispensable.

Will it be possible to resume a rational dialogue in which healthy and intelligent agreements can be reached?

In the case of our Chile, the policies of successive supposedly democratic governments had the effect of damaging educational programs, depriving schoolchildren of the indispensable teachings of logic, history, the sense of science, and the values that generate a vocation for the future.

This is the insolent foolishness of the authorities who consider the intellectual concerns of girls and boys trivial or fanciful.

A thunderous example was given by Dr. Mañalich, Minister of Health, who insolently disqualified a scientific proposal drawn up by academics working in the biological field at the University of Concepción, to produce an antiviral compound capable of delaying the appearance of coronavirus symptoms by several weeks.

Minister Mañalich, without having studied the project, described the biologists’ work as “one more of the fantasy proposals and business deals for supposed remedies against the pandemic”.

The pandemic, the plague, apparently reeks of a reality that was not worth the trouble. We will have to see what will emerge when we recover our good health… will we continue to stumble over the same stone again and again?

Farewell, my friends. Take care. The future will remain dangerous.