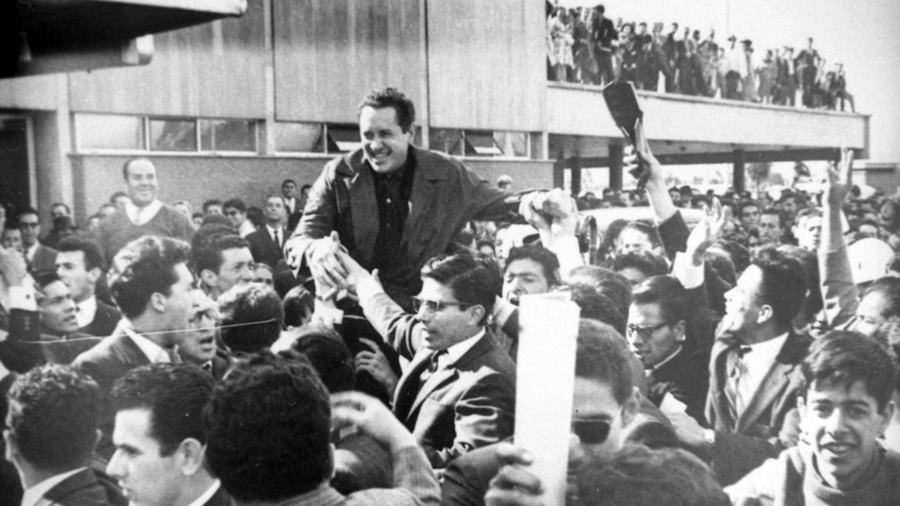 In 1958, the key parties of the Colombian oligarchy made a pact to take turns holding the presidency and to distribute all of the bureaucratic and cabinet positions throughout the two parties (Liberal and Conservative). This agreement called the National Front, consolidated and assured the holding of political power by the elites and oligarchy and blocked any attempts for an alternative or left force to emerge.

During this time, Camilo Torres Restrepo, Catholic priest, pioneer of Liberation Theology in Colombia, co-founder of Latin America’s first Faculty of Sociology at the National University of Colombia, and later on, member of the National Liberation Army, recognized the need to unite the people’s forces in a strong response to the pact of the oligarchy. Along with other movements and organizations, Camilo founded the United Front of the People, a broad opposition platform of social and political forces across sectors.

Shortly after Camilo joined the National Liberation Army (ELN), he was murdered in a special operation and the Army confiscated his body, till today the exact location of his remains are still a secret. However the words and teachings of Camilo remain valid today and his thought has inspired generations of social movements and organizations.

In honor of the 54 years since the assassination of Camilo, we spoke to Diego Pinto of the urban movement in Colombia Ciudad en Movimiento (City in Movement), part of the platform Congreso de los Pueblos (The People’s Congress) on the legacy of Camilo and the United Front today, in a moment where Colombia is undergoing a similar process of consolidation of the far-right with a simultaneous upsurge in popular mobilization.

Peoples Dispatch: In what context did the United Front of the People emerge in Colombia?

Diego Pinto: When Camilo Torres launched the United Front of the People in 1965, it was in response to the historical moment that was occurring in the country. It is important to remember that at this moment the National Front had been consolidated as an oligarchic alliance by the leadership of the Liberal Party and the leadership of the Conservative Party, of the elites that were in power at the moment.

The elites consolidated the National Front as a way of overcoming one form of violence in order to deepen other forms of violence and to advance to a new moment of the development of capitalism in the country.

And at this moment, Camilo was approached with many proposals to undertake a presidential candidacy, but he said it was not the time and that what was necessary was to consolidate a collective proposal and response.

So while the oligarchy had the National Front to suppress the Colombian people, in response, the people created the United Front of the People. But, the United Front also emerged in response to a necessity of organization, from popular education and literacy to raising awareness to and explaining the problems that the country was facing at this moment.

Within the strategy of the United Front of the People, the need for an organ of dissemination was also recognized, and the newspaper frente unido (united front) was created. It responded to the need for workers, peasants, and students to have something with which they could engage in discussions and interact with political theses to understand the political moment, which would in turn orient and improve their political actions.

For Camilo, the non-aligned are all of those that were not in the National Front and all those that did not identify clearly with a political party. The peasant that was not depoliticized but simply was not represented by the traditional parties and had ideas about what to do with the land. Or the women, that Camilo said had a situation of double exploitation and as such they were doubly revolutionary.

This is the subject that Camilo begins to discuss and unfortunately he was not able to give more depth and develop it further. Camilo, both with the category of popular class and the non-aligned, speaks of those that are excluded and unrepresented in the political process but suffer the harshness of the economic and political model and therefore must take a side.

PD: Front the lessons that Camilo left us, what does he say about unity as a principle and how can that be applied today?

DP: When we retake the ideas of Camilo, it makes us reflect first about what is unity for. And when we think about what this unity is for, we engage in a strategic exercise and unity again becomes a response to the oligarchic alliances that today in Colombia have consolidated in oligarchic blocks.

Today we can say that there are basically two principle blocks. One that seeks to deepen capitalism to favor the interests of large landowners and it revolves around war, around the exploitation of natural resources; it is the capitalism of large landowners. The other is a block that seeks to consolidate finance capitalism. And these two blocks actually complement each other very well and while they apparently are divided at times in the elections they end up participating in an exercise of unity in practice, in order to deepen the economic model around a neoliberal vision.

Unity today should be built around the same. When Camilo said that phrase, that “revolutionaries should insist in everything that brings us together and overcome what separates us,” it is a clarion call that unity should continue to be strategic, but it cannot be done by the laws of the maximums. For example, within the current strike in Colombia, we cannot build unity only among those of us that want socialism, but also unity cannot be built with those who only want timid reforms like salary hikes.

Today, in order to consolidate unity it is necessary for those that are timid in their proposals to identify what brings us together, and for those of us that seem like dreamers to also identify these common points. This recognizes that unity is not a matter of will and a nice feelings, but it has to do with political agenda and how we can arrive to these minimum agreements and draw a route forward to achieve these agreements.

I think that today once again, just as Camilo said, there is a problem with the subject. The subject is the popular class and the subject is often outside of political organizations. Just as Camilo made a point to speak directly to women, as he spoke directly to Christians, to the soldiers. Today we must think deeply about this, that today our messages should not only be for the militant of a left party, or the militant of a revolutionary organization. Today the message of unity has to be directed to the woman who has dedicated her whole life to domestic work without being paid and we must make her understand that there must be a proposal for a country wherein her existence can be dignified.

If we understand unity in this way, we can propose unity as a principle and unity always demands us to present positions not to forget what we believe in but to facilitate dialogue. One of the calls we should make today in the rank and file of the alternative and democratic movements is a call to be able to listen to one another with patience, taking into account that we think differently but that it is necessary to look for agreements. This has been lacking. Unity will always bring our victory, and our people are demanding this today.

PD: What is the concept of amor eficaz (effective love) according to Camilo?

DP: In order to understand the idea of amor eficaz it is important to understand that what he is talking about is the materialization of rights. When Camilo proposes amor eficaz it is not in the abstract, it is not the idea of oh how nice it is for us all to love each other. What Camilo says is that love must be transformed into concrete action and the concrete action must transform into rights.

When Camilo writes about amor eficaz, it is a concept mediated by love, but what he is saying is that love cannot only be words. It has to be the realization of the possibility that the people who do not have homes, can have one; that those who do not have access to food, can have it; that people can get out of the conditions of marginality and misery that they are experiencing.

Amor eficaz is his practice and he assumes it as a Christian, but today we have retaken his ideas to say that love is a practice of human beings and we need to put ourselves at the service of other people to dignify their existence. Today, this is complemented by a lot of experience of the social movement and I think particularly the feminist movement has made this very present today that amor eficaz necessarily has to be about caring for one another.

We are capable of building a dignified future with rights, but we must guarantee that while we are building this, the same level of fraternity, sorority, camaraderie, and solidarity must exist among those that are building this new world. And this is what Camilo meant by amor eficaz. The concept must not be trivialized to talking about hearts and pretty things, but it is also not an unreachable utopia, but it is a daily practice.

The convulsions produced by recent political, religious, and social events possibly have brought much confusion to the Christians of Colombia. In this critical moment of our history, it is necessary that we Christians are steadfast in the essential foundations of our religion.

Thus it is necessary to take power from the privileged minorities to give it to the poor majorities. This, if it happens rapidly, is the essence of a revolution. Revolution can be peaceful if the minorities do not resist violently. Revolution, then, is the way to achieve a government that feeds the hungry, clothes the naked, teaches those who do not know, undertakes charitable works, and practices love for our neighbors, not just occasionally and momentarily, not just for a few, but for the majority of our neighbors. Consequently, Revolution not only is permitted, but is obligatory for Christians who see in it the only way to achieve the broad outcome: love for all.