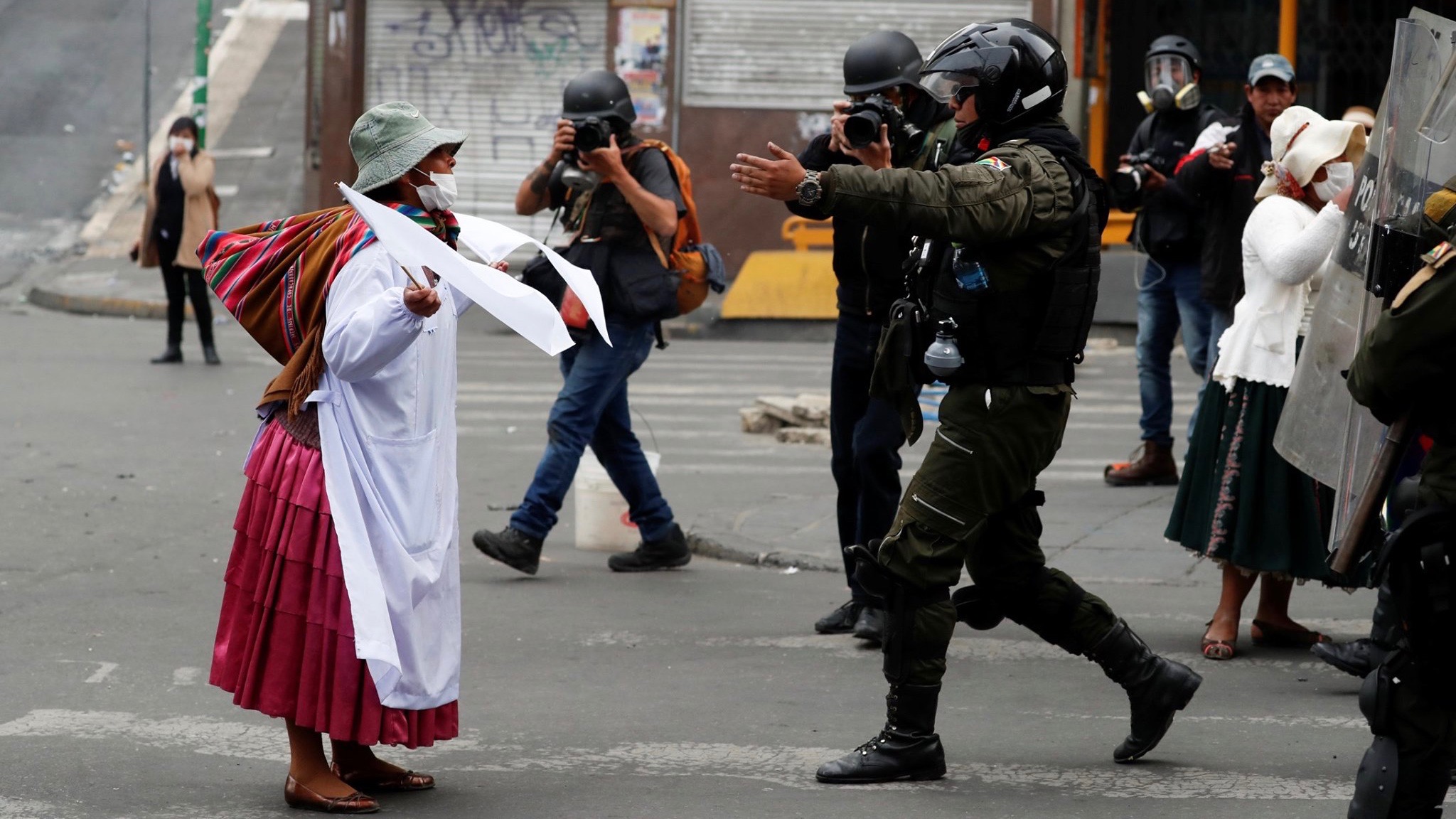 The counter-revolution in Bolivia is advancing under the parameters of a U.S.-made hybrid war and with the blessings of the conservative hierarchy of the local Catholic Church. In its current phase, the regime of exception of self-proclaimed President Jeanine Añez has unleashed an open war against the Movement for Socialism (MAS) of the ousted president Evo Morales, using the law via lawfare as the main vengeful weapon of the coup mongers.

In the short term, the goal of the coup bloc is to dismantle and eliminate the mass movement and the popular-indigenous political forces grouped around the MAS, in order to prevent its return to government in the May 3 elections and consolidate the bloody process of conservative restoration that begun last November.

After the massacres of Sacaba, in the department of Cochabamba department and Senkata  in El Alto, the transitional government delineated from Washington has been reconfiguring the military-police machinery as the mainstay of the social counter-insurgency, using the hegemonic media as main instrument for their psychological war. The commanders of the Bolivian armed forces have been promoting an organizational reformulation of the military institution, in addition to an ideological realignment with the intelligence and national security apparatuses of the United States and Israel, whose most visible expressions are the establishment of anti-terrorist intelligence bodies and preventive anti-subversive militarization and patrol operations in cities and regions of the country.

It’s a fact, although covertly, that the armed forces have been exercising a role of surveillance, control and direction over the entire state apparatus since the days of the coup, with the endorsement of the Pentagon’s Southern Command. However, the visible repressive face of the de facto regime is Interior Minister Arturo Murillo, who has criminalized and prosecuted the social struggle by accusing it of sedition, terrorism and corruption, as a way of covering up a political hunt for MAS leaders.

As time goes by, the names of some of the operators of last November’s civil-politico-military-media coup d’état and their external links have come to light. In particular, the former successor of dictator Hugo Banzer, Jorge Tuto Quiroga, who would have served as the internal articulator of the Trump administration’s hawks, with Mike Pompeo at the head, and the then rector of the Universidad Mayor de San Andrés, Waldo Albarracin, organizer of the arrival of the paramilitary groups of the Santa Cruz Youth Union (Union Juvenil Cruceñista) to the city of La Paz, on the eve of the coup.

According to statements by Albarracin himself, the decision to impose Jeanine Añez as usurper was taken at a secret meeting at the Catholic University. Together with Quiroga, Carlos Mesa, and other coup plotters, the meeting was also attended by a representative of the regime of Brazil’s Jair Bolsonaro, whose affinity with the self-proclaimed president is obvious because of the neofascist, racist and religious fanatical rantings of both of them. According to local newspaper La Razon, Añez required there be between $200,000 and $300,000 to compensate her for the risks involved in assuming the presidency in such circumstances.

At this juncture, another person identified as the face of the CIA within the Catholic hierarchy is the Archbishop of Santa Cruz, Sergio Gualberti Calandrina. With ideas of grandeur and possessing a racist narrative at the service of the oligarchy through the ideological manipulation of the resentful traditional middle class, Gualberti embodies Bolivia’s holy political church in the task of containing the mob, identified in the self-proclaimed president’s official speech as wild Indians, satanists and MAS hordes. Ethnicity as a battleground of formal democracy, wielded as a strategy to defend class privileges in times of electoral campaigns by a church representative.

Just as Bolivia’s deposed Vice-President Alvaro Garcia Linera says, “At heart, all racism is a counter-insurgency method of equality, that is, of democracy. Every process of social equality has an inevitable cost; the devaluation of the privileges of the traditional classes. In the case of Bolivia, according to the former Vice-President, hatred was the language used by a vile class that did not hesitate “in describing as ‘wild’ the natives” that were displacing them. This, in his opinion, is giving rise to the emergence of a type of right-wing populism and fascism encouraged by the dissatisfaction of the middle classes, which in the case of Bolivia is a type of neo-fascism covered under religion.

It goes without saying that the machinery of fraud in favor of the current coup d’état bloc and the reactionary forces—with Justice as an electoral weapon between now and May 3—is at work. There is no guarantee for free and transparent elections in Bolivia. In the phase of the counter-revolution back to the government, those who were willing to kill with impunity with the consent of the Trump Administration will not hesitate to circumvent the will of the majority at any price.