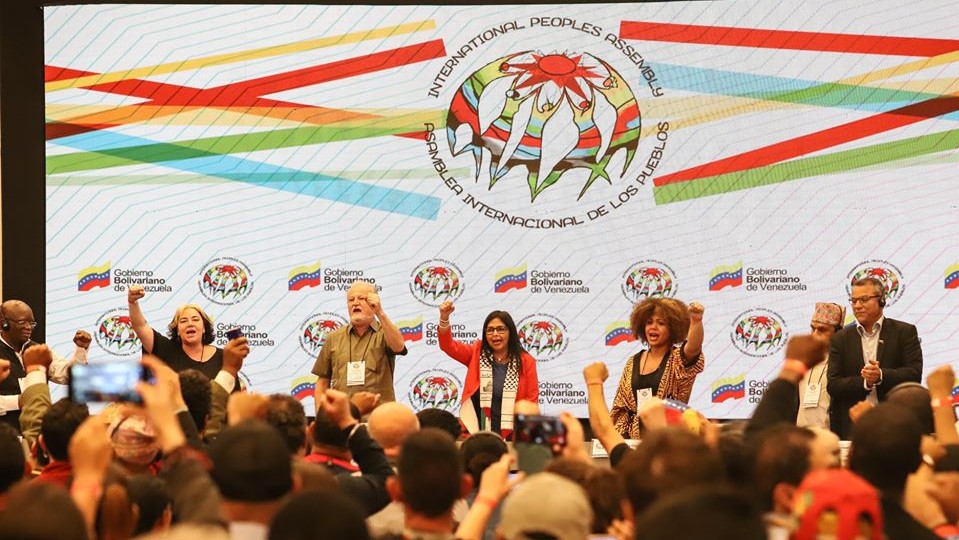 The International Peoples’ Assembly in Solidarity with the Bolivarian Revolution and Against Imperialism. Photo: Rafael Stedile

2019 was marked by the intensification of the international class struggle, materialized in the repression to manifestations, attacks to democracy, geopolitical instability and popular resistance. Against the offensives that have continued to resound in 2020, the International Peoples’ Assembly (IPA) – an international coordination of people’s movements, left parties and trade unions – is organizing a week of anti-imperialist struggle that will take place from May 25 to 30 in diverse countries.

The objective is to carry-out a week of people’s mobilization through acts, debates and conferences that will have as a central theme the criticism of capitalism, as well as the deep analysis of its current mechanisms of exploitation and control.

“Our expectation is to be able to achieve a very broad process that involves large sections of the people’s movements, trade unions, left parties, in order to achieve a process of mobilization in this moment of right-wing offensive, so strong, not only in the Americas but in the entire world,” explained Nalu Faria, coordinator of the World March of Women and member of the IPA.

She adds that the criticism does not only pertain to the imperialist countries, but the instruments used to impose an agenda of power, like the actions of transnational companies, the free trade agreements, as well as the militarization and criminalization of the struggles.

Faria defends that now, more than ever, it is necessary to struggle against all forms of oppression. “Capitalism overlaps with racism, with patriarchy, with colonialism. We have to look also to the agenda of the ecologists, of human rights, and of course, in this moment, the struggle for democracy, within a perspective of the construction of sovereignty and people’s power,” she said.

In response to a context of the advance of neoliberalism, Nalu Faria also highlights that people’s resistance will intensify, an example being the mobilizations in Chile last year.

Irvin Jim, General Secretary of the National Union of Metalworkers of South Africa which is part of the IPA is a system in permanent crisis that always punishes the working class.

“It’s important to make the point that capitalism is a system in permanent crisis. It goes through booms and busts. What it does not compromise is its mission to continue to make profit. It makes profit during booms, it makes profits when the economy is in a crisis, it makes profits even during a drought. It however, always will ensure that the working class will pay for its crises. The nature of imperialism we have witnessed, is not just undemocratic, but it is openly racist and completely backward,” denounces Jim.

The vision is that the week of struggle will be a key moment of coming together between the people of all of the continents, and it should be preceded by a constant process of mobilization and building anti-imperialist alliances, rooting the actions of the movements in an anti-system criticism.

The Week of Anti-Imperialist Struggle is the fruit of international encounters like the one held in Caracas, Venezuela in the beginning of last year that brought together around 500 participants from 87 countries, representing 181 people’s movements and organizations of the entire world. Another event of a similar style was held in Havana, Cuba in November of last year, called the Anti-imperialist Encounter for Democracy and against Neoliberalism.

Venezuela was chosen for this encounter so that people’s movements across the world could lend their solidarity to these nations in the face of imperialist projects. Nalu Faria lists Venezuela as one of these, and assures that the country has been the “stage” of the class struggle in the international context in the last several years and it continues to be a reference of international people’s mobilization.

“We need to build a process of struggle that does not leave Venezuela isolated. We will build a process of a lot of mobilization in several countries in the region, that will show how we are building an anti-capitalist and anti-imperialist struggle, considering that Venezuela is central in this process because it has resisted these attacks of imperialism and has maintained its revolution, with the whole economic, media and cultural war, that they wage against the Venezuelan people and government,” she explains.

Irvin Jim, commented that in 2019, international solidarity was the only response that could have been given against imperialism and its particular questions in different countries.

“2019 was a year where imperialism left us with no option in furthering the aim of international solidarity, we had to stand in defense of the people of Venezuela. We had to join a worldwide movement and mobilization that took a campaign against the right wing regime of Bolsonaro, which staged a coup in Brazil and undemocratically abused political power when they arrested Lula da Silva, prompting all of us as peace-loving people of the world to coin a slogan: Free Lula. We continue to condemn this rampant arrogance of right wing forces, led by a right wing opportunist – Guaidó – in Venezuela who is a lacky of the United States. We reject the coup against Evo Morales in Bolivia. And in 2020, we are calling on all revolutionary forces all over the world to continue to defend people’s democracy in these countries,” he concluded.