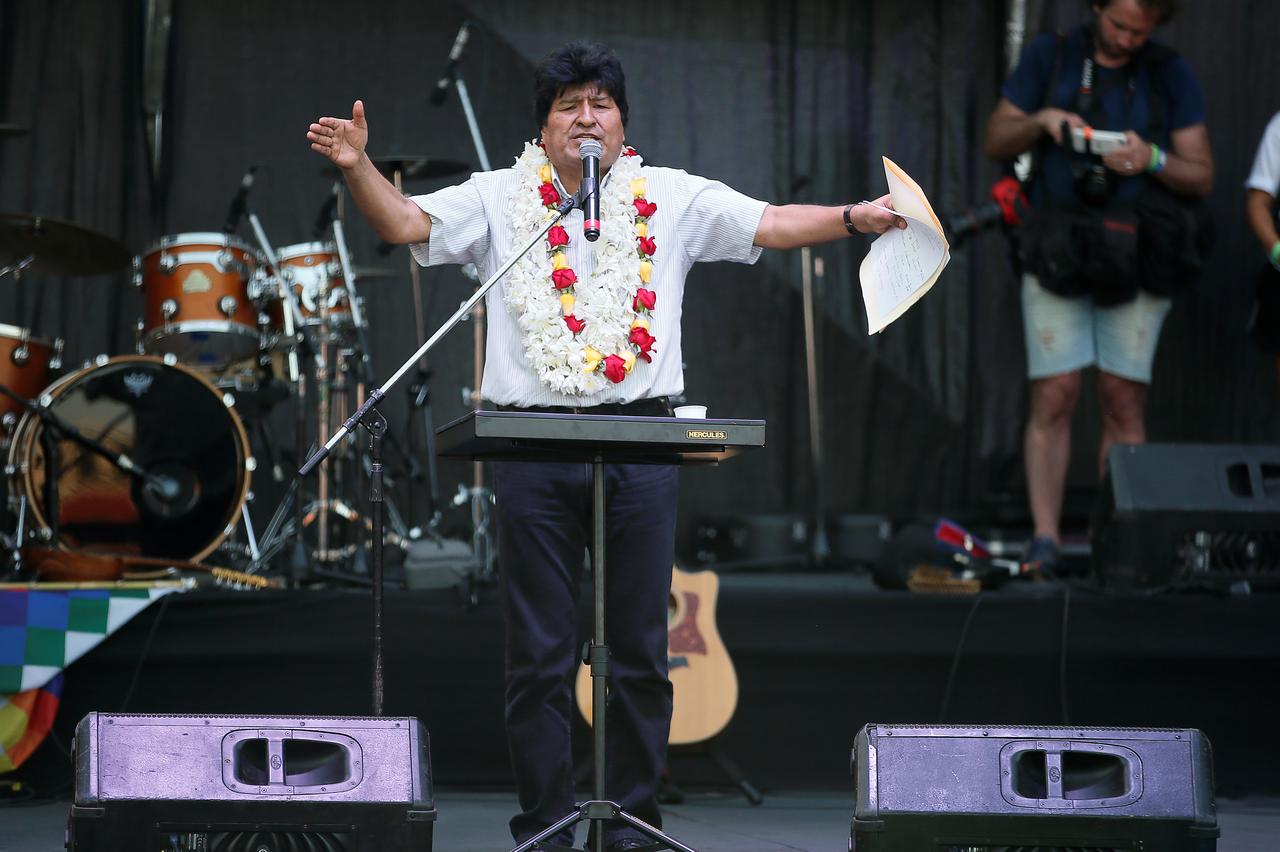 The Day of the Plurinational State of Bolivia is celebrated on Jan. 22. Eleven years have passed since 2009, when the country’s so-called “re-foundation” was carried out, led by the first Indigenous president, Evo Morales. That day marked the beginning of a new political, social and economic horizon for the Andean nation.

The process of transition to a new state was approved in a constitutional referendum on Jan. 25, 2009, with 61.43 percent of the votes and a historical turnout of 90.26 percent, and was promulgated on Feb. 7 of the same year.

However, in 2010, Morales officially declares Jan. 22 as the official day of the Plurinational State of Bolivia.

This day, the South American country celebrates the approval of a New Political Constitution in which the state leaves behind its traditional model of Republic, and the legacy of Spanish colonization, to give way to the Plurinational State that is ruled by the principles of unity, community, and respect for the plurinational law, according to the new document.

A “free, independent, sovereign, democratic, intercultural, decentralized and autonomous” State that harbors new political figures in the structures of power as well as in the leadership of the State: the Indigenous and Campesino peoples.

The New Constitution, debated since 2006, establishes: “We left the colonial, republican and neoliberal state in the past. We assumed the historical challenge to collectively build a Social Unitary State of Plurinational Communitarian Law, which integrates and articulates the purposes of advancing toward a Bolivia that is democratic, productive, carrier, and inspirer of peace, committed to integral development and with the free determination of its people.”

In that sense, the main transformation with the “re-foundation” of Bolivia was precisely based on the recognition, inclusion and participation of Indigenous and Campesino peoples in decision-making and representation —never seen before — in the State’s organizational chart.

“Before, in the Republic, Indigenous people did not exist or were almost a decorative element because of their cultures and clothes. They are now people with civil rights and faculties to exercise their own autonomy,” Victor Borda, a member of the Movement Toward Socialism (MAS) party told a local media outlet in 2018.

Then-President, Morales, during the promulgation of the Constitution (2009), at an event also attended by the Nobel Peace Prize winner and Guatemalan Indigenous leader Rigoberta Menchu, said that the New Constitution was inspired by the “permanent struggle of liberation” that, since the times of the Spanish colony, the Indigenous peoples, the social movements and the Bolivian patriots undertook in defense of life, justice, and sovereignty.

Morales, with a speech full of historical references, stressed that, although the new law “protects all Bolivians equally,” it mainly enshrine “the deepest aspirations of the most abandoned sectors” in the country, referring to Indigenous peoples and the working class.

Changing the political, social, economic and cultural course in Bolivia meant something unprecedented in its history, after a cycle of governments founded under highly oligarchic and exclusionary processes that, as a result of colonialism very embedded in the social fabric, fostered a pattern of exclusion and subordination of a majority: Indigenous populations, Campesino and also Afro-Bolivians.

“The pre-existence of Indigenous nations and peoples is the ‘plurality’ on which the Plurinational State is built. It is a rupture with the Nation-State, that is, a State whose mission is to homogenize the social fabric, the basis for legal monism, for the modern construction of rational institutions, for example a single official language, a single valid right or a single way of understanding development. The 2009 Constitution breaks with this way of conceiving the State and recognizes the previous existence, and with it, the self-determination of indigenous nations and peoples,” Bolivian lawyer, Farit Rojas Tudela, told La Razon, a local media outlet.

From the critical side that questions the process of re-foundation of the Bolivian state, many debates have taken place around the meaning of the “plurinational” as something attributed to Indigenous peoples in an exclusive way, which is reduced to the imaginary of a “Indigenous State” and could exclude the rest, those who are not “Indigenous.”

However, in the face of these criticisms, analysts have affirmed that in the Bolivian case, these positions end up losing the starting point in the historical framework and the broken social structure that not only had a debt to the Indigenous peoples but beyond that, the significance of the plurinational is rooted not only in the recognition of the Indigenous peoples but also in the recognition of the “Indigenous” in the whole social fabric, that is to say everywhere, in each of the Bolivians, something that had not previously been so radically questioned.

According to Lucila Julia Choque, from the Observatory of Democratic Parity in Bolivia, more than 52% of the population have maintained their own characteristics (physical identity as well as ancestral practices and customs) and have stressed that, before the constitutional change, these populations did not participate in public and political life. “It does not mean that they were not part of politics but they were not in key decision-making spaces within the State,” she said.

“My grandfather used to say when I was little, ‘one day someone like us, like me, will be president of Bolivia,’ and I was telling myself, but who like us could be president? That is impossible, I said. I grew up with that mentality, and I was surprised that my grandfather’s words were fulfilled, an Indigenous had been elected president of Bolivia,” Nancy Flores Barco, Bolivian former member of the assembly said in a TeleSUR documentary in 2017.

Analysts agree that while the government of the first Indigenous president was not spared from criticism, one thing that cannot be denied is the level of social inclusion that has been achieved in the nearly 14 years of Morales’ administration, something unprecedented in the republican history of Bolivia since 1825.

“The assimilation (since the foundation of the Republic, after the colonization) was precisely the shame, the discomfort (of being Indigenous). However, that came to an end when Evo Morales was elected president. From this moment there was a collective recovery of Indigenous pride, we regain collective self-esteem, pride for what we are,” said the Bolivian historian Carlos Mamani in a TeleSUR documentary back in 2017.

According to the last National Census in 2012, 40.6 percent of the Bolivian population identified as a member of an Indigenous people or nation, and the projections of the National Institute of Statistics (INE) of 2017 indicated the probability of an increase to 48 percent. The main Indigenous peoples in the country are the Aymaras and Quechuas (in La Paz, Cochabamba, Potosi, Chuquisaca) and the Guaranies (mainly in Santa Cruz and Tarija).

2020 marks 10 years since the Day of Plurinational State was declared. It will be the first year without Morales, who was forced to resign on Nov.10, 2019 after a coup d’état perpetrated by the traditional right-wing, the revolts led by the civic committees, but above all, by the pressure exerted by the military forces.

From this moment, Bolivia was immersed in a scenario of intense mobilizations against the de-facto government, which also expressed racist actions against symbols such as the wiphala (flag of the Indigenous peoples), that led to the uprising of the Indigenous population. The de-facto government responded with militarization that resulted in more than 36 deaths that so far haven’t been processed by justice.

Today, the Andean nation seems to be in the midst of uncertainty, not only about who will be the next president of Bolivia, but it also seems to be navigating at the crossroads of two projects: the return to the traditional Republic or the support of the Plurinational State that, this year and after the violent repressions, reaffirmed its founding sense.