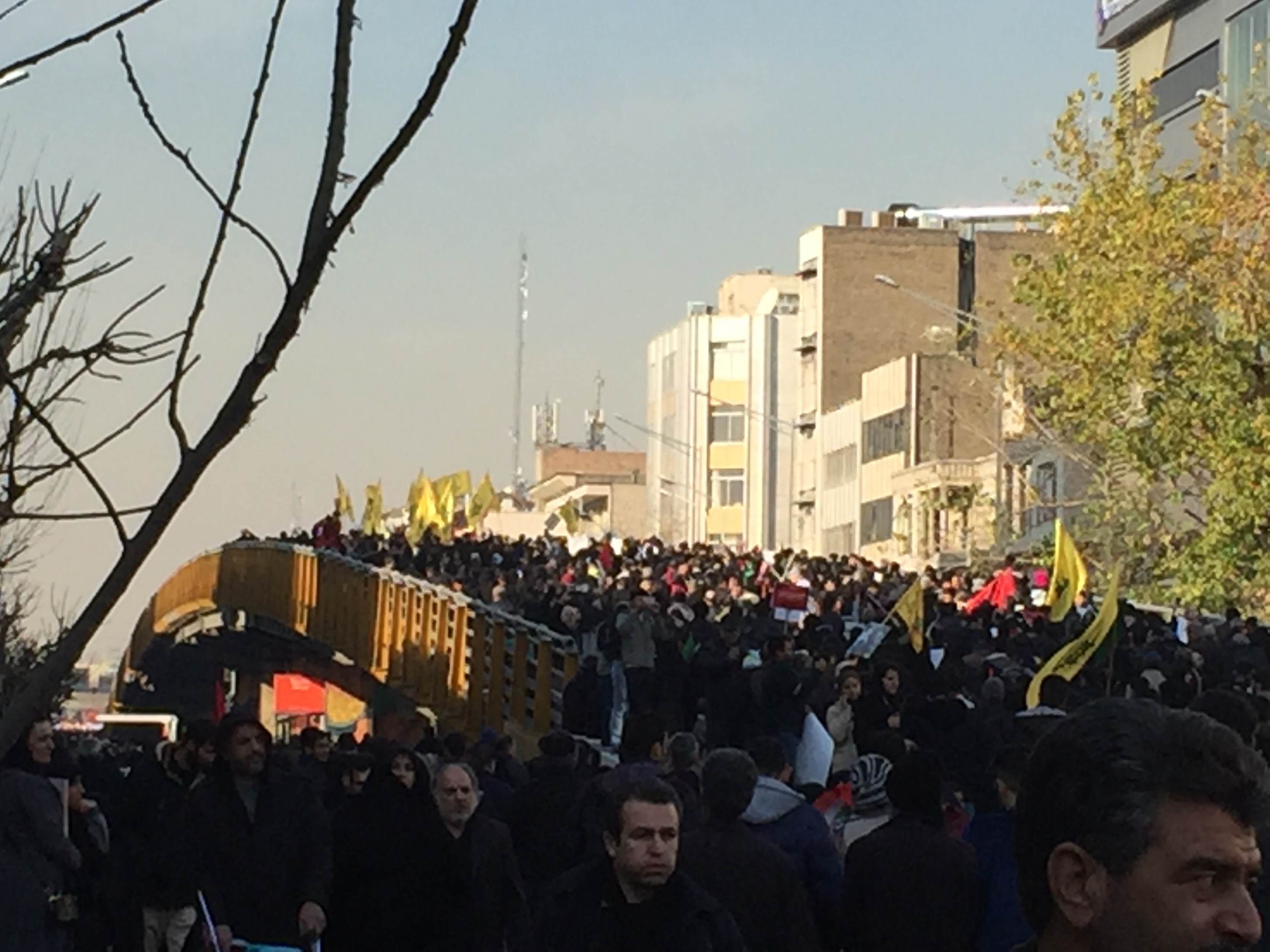 Ι’m arriving at Istanbul to wait for transit and the news are everywhere: while announcing the Iraqi parliament’s decision to get rid of the American occupation forces, the Iraqi prime minister said that general Soleimani was invited by him to discuss a new peace deal. He was murdered while on his way to discuss the de-escalation of the Saudi – Iranian crisis. He wasn’t planning some attack against the Americans. He was representing a people broken by sanctions, hoping to bring them to an end. He was trapped and murdered in the most hideous way.

On the plane to Tehran, I am seated next to Chinese boy from Hong Kong, Charlie, who says that he is worried by the developments, but will fly nonetheless as he had arranged this vacation long ago. Besides, he is used to the media exaggerating things and tells me that in Hong Kong “life goes on as always, it is not [as dangerous] as the TV news show it”. Charlie might have a point. I tell him that, the Iranians, as I’ve known them, are a proud, hospitable people, who want to meet others and have a great cuisine. The young woman in front of me stands up and smiles. “You are so right! That is who we are, and I am proud of us!‘.

After getting out of the plane in Tehran, I see him everywhere. General Qasem Soleimani, that is. On the TV are images of him I have never seen before. Black and white footage from when he was a soldier, a lieutenant, a young man during the Iraqi war, another murderous American orchestrated war against Iran. In another video, he is with his soldiers, a kind man, a father figure, smiling. And an image I knew half the story about, that of Ayatollah Ali Khamenei kissing him on the forehead. In this video, the ayatollah decorates him and Soleimani bows his head low. After the medal is pinned, he attempts to get back to his formal position. Khamenei tenderly brings him nearer, with a very subtle gesture, and the general becomes a son, accepting the kiss of fatherly love and pride. And then he smiles.

He smiles. In pictures. He laughs. In video footage. The unsmiling man, that sober, austere figure in the photographs I’ve known, the photographs I’ve seen on our media again and again, has nothing to do with this image, the image his people are sharing with me today. An image that sheds a new light to decades of a people’s fight to survive.

At the passport counters, there are his pictures everywhere. A picture here, a different one there, there’s always a picture of the general, except at the foreigners’ counter. Civility to us or fear that someone may insult him, willingly or unwillingly? Can’t tell…

Na’eem Jeenah’s, the South African intellectual researcher of the Middle East and president of the Afro-MiddleEast Centre’s CV is  substantial – not only because of his research work but because of his personal activism during the Apartheid era. We meet at a shared taxi, and we talk about what everybody talks about this day. “The day of the murder I gave 18 interviews”, he tells me, “all asking the same questions”. He gives one more on this taxi ride. “The main issue is with the government right now. They are trying to keep the people in check, because the people want the harshest revenge. Iranian economy is in a very bad condition because of the sanctions, and Iran cannot do a lot. But the people’s demand is growing‘. He arrived directly from South Africa and has been up for 25 hours straight, so I don’t want to bother him any further, but we promise to meet again tomorrow.

At the billboards on the side of the road and on the bridges, there is his image. Different images of him, words in Farsi, but I do not know Farsi. There is only one phrase I can read, written in English. An entire world will avenge you. An entire world. For you.

In the taxi, there is his image. The driver knows all the details about the funerals, he is in a hurry to get us to the hotel so he can go to pay his respects. At the place where the Ayatollah cried. Where men fell, boys promised revenge, and women stood tall. It’s still dark, around five a.m., but outside the traffic is heavy like it’s rush hour. It is not only our driver that wants to pay his respects.

From the hotel, I drink a cup of coffee and leave straight to the funeral. Time is of the essence.

Outside Tehran awaits, a city of ten million people. Noise, fog, cars everywhere, horns, bikes on the pavements that could not care less about pedestrians. That’s the Tehran I remember. But not now. Not today, the third and last day of National Mourning. Today the cars follow each other silently. Patiently. Bikes do not run. Nobody is in a hurry, nobody makes a noise. This is a different city than the one I visited just ten months ago.

The taxi driver drops close to the former American embassy, the “Den of Spies”, the “Museum of Arrogance” just opposite the Greek Orthodox Church of Tehran. The former embassy has some new morals – the previous ones are gone. The new ones show Trump and promise revenge. White crosses are inside its walls, for the first time. Boys, with tears on their eyes stand by its walls. Girls light candles in front of his picture.

I walk towards the place the taxi driver told me, to meet the crowd. It doesn’t take much searching. You just follow the red flag. Red flags, people wearing them as scarves, yellow flags, black flags with red letters. And, no sound, for a while. Inside the University, Khamenei cries like a baby. His soldiers and his friends. These people who love him and will teach their children to love him. These people promise that they will not allow him to become a history footnote, he, the one who kept them standing proud against the Empire. They will keep their promise, no matter what. “Blood and land”, their ancient sacred words. They are the People of Housein, the people with the red flags.

The march stalls for a while. Delay, silence, no voice. Someone has put a stand with pictures of the two ayatollahs and Soleimani, flowers surrounding them, and everybody seems to want a selfie. In time we pass the stand and the pace gets back to normal. I stop to smoke and watch. The faces. His people.

And, now here marches the Black Block, their very own version of it. Those steel women who keep the memories and the future in their hands, dressed in black chadors of mourning. With their baby girls dressed in their own black chadors, not in the usual pink and flowery dresses I’ve seen last time. These mourning clothes are for everybody.

A father carrying his daughter on his shoulders, laughs as he hears her stealing the rotating leadership from the man who shouts a slogan so that everybody can repeat it. But the little one has her own ideas and when he suggests “Down with America‘, she answers, before anyone else has a chance to, “Down with Israel‘. Everybody laughs and follows her lead, she is the leader now and everybody looks at her proudly, she is the tomorrow that will not succumb.

Old men with walking sticks, moving in small tortured steps, people with disabilities, boys holding hands, older men in wheelchairs – one holds his oxygen mask in one hand, a picture of the general in the other.

There are moments that I do not want to raise my cellphone’s camera. Due to respect, anxiety, and, yes, that feeling that I am a stranger. I can see his image, but that is all. I can see the thousands of images in the arms of common people. But that is it. I do not understand what they say, only Amrika, Israil, Saud, Ingilis, the words that follow “Down with‘. That is all I get. And the mens’ tears. The tears of the imam that talks about their hero, on top of one of the little podiums set up here and there, he suddenly bursts in tears, the microphone falls from his hand, and he falls in the arms of the man next to him.

There’s the old man that leans on the bus stop, his palm on his face, his mourning silent. The old man in the wheel chair, crying loud. The soldiers, in line, silent, unsmiling, as I once thought that their leader was. The steel women who chant and do not cry. Who take pictures of their kids next to the photos of their martyr, and hope that they will follow the ancient Spartan coming-of-age motto: “We will be a lot better than you!”.

It is not only Tehran. It is the whole of Iran. On the same evening, on the TV, all stations display a black ribbon up left. People are everywhere, all streets are full, to say goodbye to the man that Housein, the sacrificed imam, awaits in paradise. There hasn’t been a funeral like that since the one of Ayatollah Khomeini. And never ever did the body of the hero passed so many cities, so many sacred places, for people to pay respects. Never, since 1989, a funeral had many million people travelling to pay their respects. With no casualties in Tehran this time, with this deafening silence that brakes occasionally from chants at the squares where youngsters gather, to start again a moment later.

I have four or five hours in the streets. I’m going up and down the procession, they are always moving forward. Standing still are only the policemen, the girls of the Red Crescent, the water vessels for the thirsty – water for the people of the dessert. And then, slowly, they go back home, with all their flags held upright, not even one wrapped.

I have to go to sleep. I am tired, I have been awake for more than 16 hours, I am becoming more emotional than usual and I’m thinking I should not write in this state. But, I have promised the guys back in the office to bring a gift from every place we go to cover the news. So, I waited until the end of the march, the demonstration, the vigil, because, I thought I would be able to collect a thrown away picture of the general from the end of his life and the beginning of his legend.

Yet, there are none. Not even one picture, of any size, on the street. Three million people, six million hands, and not even one relaxed for a moment. I walked back 3.8 klm, 2.3 miles, while searching for one, on the pavement or in some trashcan. They will not believe me, I thought, and snapped some pictures of the garbage.

So, this is “this Solomon”. A sacred figure for his people, to give him such farewell.

The Article was Originally Published in Greek on The Press Project.

The English Translation was Provided by the Author.