The violent coup in Bolivia may have been presaged by events at the Vatican, where right-wing Catholics rebelled against the Pope’s display of respect for the indigenous earth goddess.

“A fundamentalist Austrian Catholic entered the Church of Santa Maria Traspontina in the dark of night and stole the five wooden Pachamama statues.”

On November 14, Bolivian coup leader Luis Fernando Camacho, a white Evangelical Christian fascist millionaire, stormed Bolivia’s government palace with his pastor, who pronounced that “Pachamama will never return to the palace,” and “Bolivia belongs to Christ.”

This might at first seem strange because 75% of Bolivia’s people identify as Roman Catholic, but it’s largely a syncretic Catholicism, a blend of both Catholic and indigenous religion which includes Pachamama, the Andean and Amazonian earth goddess. Pachamama is symbolized as a naked, pregnant woman kneeling with her arms protectively wrapped around the child in her womb, and her head turned to the earth as though in meditation or prayer.

Pachamama had suffered violence and desecration in the Vatican just two weeks before the coup, but in that case Pachamama prevailed, though not as definitively as the liberatory wing of the Church might have liked. Here’s a brief, far from conclusive, chronology of events leading up to the ongoing standoff:

January 2015: Evo Morales says, “I remain convinced that we Bolivians have a double religion, double faith. We are Catholics, but at the same time we have rituals of our own.”

Pope Francis II, an Argentinian, visits Bolivia. He meets with indigenous organizations and peoples in traditional dress, and asks them to forgive the Roman Catholic Church’s sins during “the so-called conquest.”

He drinks coca leaf tea while on a plane flying into the Andes. (There had been much speculation as to whether he would drink coca tea or chew coca leaves, the base for cocaine, which Bolivians chew to counter altitude sickness and other maladies. When chewed or used to make tea, coca leaf is a mild stimulant somewhat like coffee. President Evo Morales is a former coca farmer.)

Pope Francis criticizes capitalism, as he has before, and calls for the downtrodden to create a new world order.

He denounces the “new colonialism” of agencies like the IMF and the World Bank that impose economic austerity, and he calls for the poor to have the “sacred rights” of labor, lodging and land.

He warns that time is running out to save the planet from irreparable harm, as he has before. 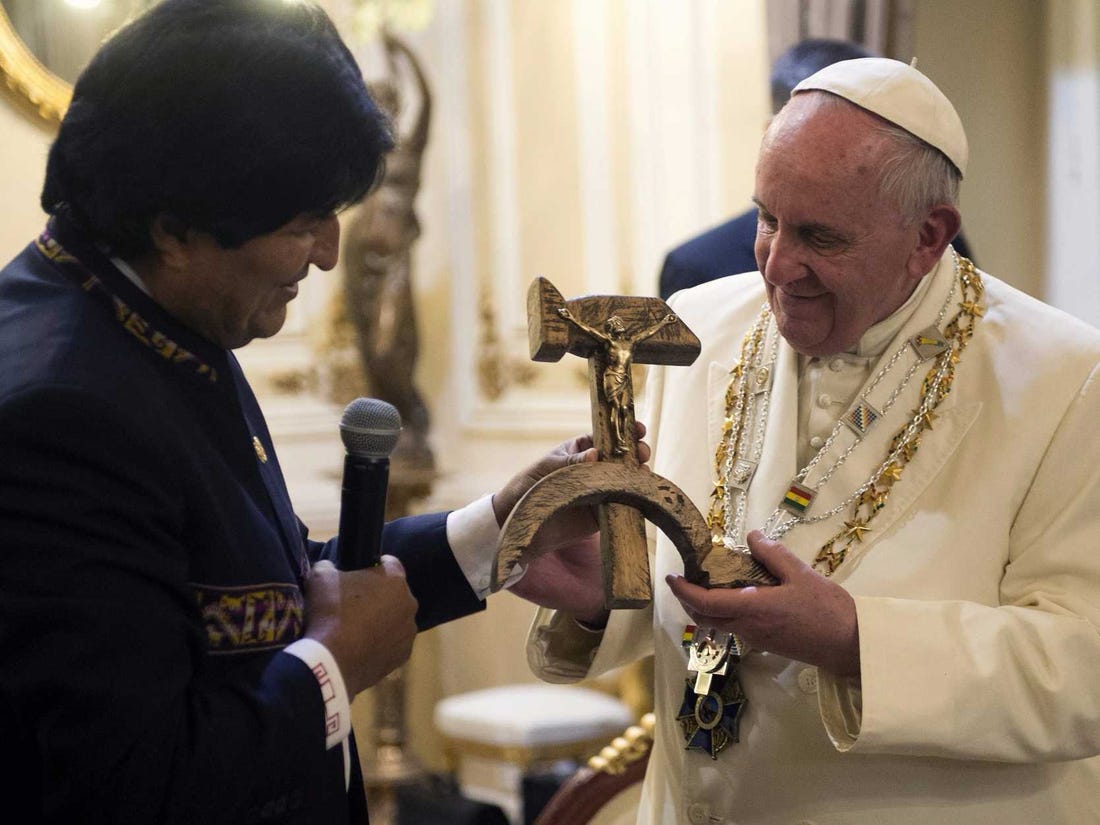 During the same visit, President Evo Morales presents Pope Francis with a carved wooden crucifix mounted on a hammer and sickle. Press report that the Pope seems a bit surprised, but not offended.

The Pope’s visit wins praise from the church’s liberation theologists, condemnation from its fundamentalists.

October 2—27: Pope Francis hosts the Synod of Bishops for the Pan-Amazon region, a three-week conference in Vatican City, the independent city state within Rome where the Pope is sovereign. Bolivia includes both Andean and Amazonian climes, but it is identified as Amazonian for the purposes of this conference, as are Brazil, Ecuador, Peru, Guyana, Colombia, French Guiana, Venezuela and Suriname. Not only bishops but also Catholics representing their countries and indigenous peoples attend the synod.

There are a list of issues to be discussed including the ordination of married priests and the appointment of women as deacons, ordained ministers of an order ranking below that of priest. The central themes, however, were combating climate change and protecting indigenous peoples.

October 4: During a tree planting ceremony in the Vatican Gardens, indigenous people in traditional dress kneel in a circle and appear to pray to wood statues of Pachamama. Then they present the Pachamama statues from their homelands to Pope Francis, who, in a video documenting the event, appears to bless them.

October 6: Amazonian Catholics carry the Pachamama statues from St. Peter’s Basilica to the Vatican’s Synod Hall during the synod’s opening procession. The Pope then has the statues displayed in the Church of Santa Maria Traspontina.

October 21: Alexander Tschugguel, a fundamentalist Austrian Catholic, and an unnamed accomplice enter the Church of Santa Maria Traspontina in the dark of night and steal the five wooden Pachamama statues. 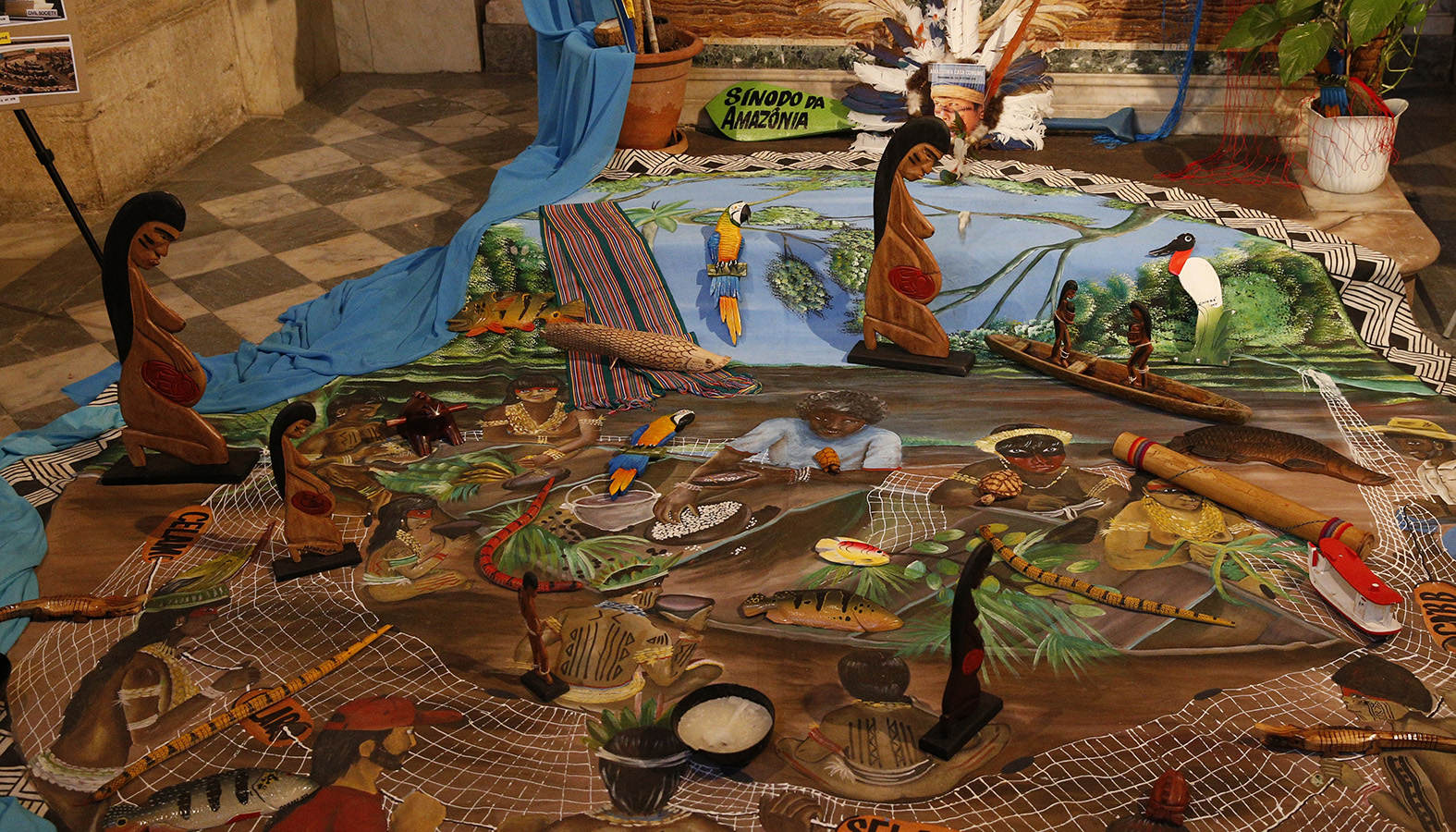 In the early dawn, the two thieves march onto the Ponte Sant’Angelo, a bridge over the Tiber River completed by Emperor Hadrian in 134 AD. In a video shot by Tschugguel’s accomplice, he places each of the statues on the bridge’s balustrade, then bats them into the river, one after the other.

“The Tschugguel bats the statues into the river.”

The fundamentalist Catholic Church celebrates. Tschugguel is heroized in the fundamentalist Catholic press and interviewed in a LifeSiteNews video podcast. He says he felt he had to do what he did to go to heaven. Shortly thereafter he goes on a US tour sponsored by the American Society for the Defense of Tradition, Family, and Property  (TFP), LifeSiteNews , and Taylor Marshall, a blogger  and former Episcopal priest.

On its website, the American TFP describes its three values—tradition, family, and property—as a protective wall against all Marxist, socialist and communist thought. Its banner issues include climate change denial, defense of the unborn, homophobia, advocacy for nuclear weapons, and support for Donald Trump. It protested  the Pope’s Amazon synod and called the Amazon “a huge ‘green slum’ divided into tribal ghettos.” This is alt right, fundamentalist Catholicism with US roots and more devotees here than anywhere else. On November 15, they publish “Pachamama Slayer” Tells His Story at the Washington Bureau , an account of Tschuggel’s speech to 170 of TFP’s members assembled in McLean, Virginia. ”

October 23: The National Catholic Reporter’s editorial board publishes Desecration of Amazonian mother statues was a racist act . On the same day, NCR columnist and editor Jamie Manson , who also identifies as the “only out queer woman in the worldwide Catholic media,” publishes Desecration of sacred images demands bolder action from Vatican , giving the Pope some credit:

“Before this incident, Pope Francis has made thinly veiled critiques of the Catholic alt-right’s fundamentalist antics. More recently, he has criticized them more directly.

“For example, when one of the alt-right characters complained about the feathered headdresses worn by some of the indigenous people at a papal Sunday Mass, Francis said, ‘I was pained to hear, right here, a sarcastic comment about a pious man with feathers on his head who brought an offering.

“‘Tell me: What’s the difference between having feathers on your head and the three-peaked hat worn by certain officials in our dicasters?’ he added, referring to the three-pointed red birettas worn by cardinals.”

Further on, however, she demanded more courage:

“This desecration wasn’t an act against a ‘spirit of dialogue,’ it was an act of religious violence that undoubtedly terrorized a people who already live in constant fear . [Because of the advancing capitalist destruction of their homelands and cultures.]

“This act of terrorism was also profoundly racist and misogynist, and reasserts the neocolonial, white supremacist mentality that is at the root of the destruction of the Amazon and its native peoples.

“It was also a crime. Will those men be sought out and arrested? The Vatican has not said.”

October 25: In an afternoon session of the Vatican’s Synod of Bishops on the Amazon, Pope Francis apologizes, as the Bishop of the Roman diocese, to those offended by what Alexander Tschugguel has done. He reports that Italian military divers have recovered the Pachamama statues, that they are undamaged, and that they are in the possession of the Italian national police.

October 26: The Amazon synod closes its official business and produces its final document. It calls on Pope Francis to allow the ordination of married men in the Amazon because there aren’t enough priests there.  It also puts forth proposals to address both the rainforest and its people. These include developing the concept of “ecological sin” and calling for the Church across the Amazon to divest its finances from extractive industries that harm the planet.

October 27: In the final October 27 Sunday mass, a woman, wearing face-paint and a feathered headdress, leads the procession into St. Peter’s Basilica. Several indigenous women bring gifts accepted by the Pope which include a plant that is placed on the altar. The plant has grown during the three weeks of the synod from corn seeds they had brought from Brazil.

Pope Francis enters with a new pastoral staff, which the Vatican says was a gift to him from the synod. It is made in dark wood with a simple Latin cross at the top and what appear to be indigenous depictions of the four Gospel writers.

He warns against “believing ourselves to be righteous,” calling it “the root of every spiritual error,” and says:

“In this synod we have had the grace of listening to the voices of the poor and reflecting on the precariousness of their lives, threatened by predatory models of development.

“Many have testified to us that it is possible to look at reality in a different way, accepting it with open arms as a gift, treating the created world not as a resource to be exploited but as a home to be preserved.”

November 15: Evo Morales, who has left La Paz but has not yet gone into exile, calls on the UN and perhaps Pope Francis to mediate the conflict. Pope Francis does not respond publicly and Morales soon goes into exile.

“Bolivia’s interim president has made a complete break with her predecessor’s decision to turn it into a secular state. It was with two copies of the Bible in hand and the cry of ‘Glory to God!’ that right-wing senator Jeanine Añez assumed the role of interim president on Nov. 12, replacing the socialist Evo Morales, who had announced his resignation two days earlier.”

The role of Pope Francis and the Roman Catholic Church in this new phase of Bolivian history remains to be seen.

Ann Garrison is an independent journalist based in the San Francisco Bay Area. In 2014, she received the Victoire Ingabire Umuhoza Democracy and Peace Prize  for her reporting on conflict in the African Great Lakes region. She can be reached at ann@anngarrison.com.

Dr. Jean-Claude Maswana is a Congolese native and activist, and an economics professor at Ritsumeikan University, Japan.

Our Lady of the Amazon