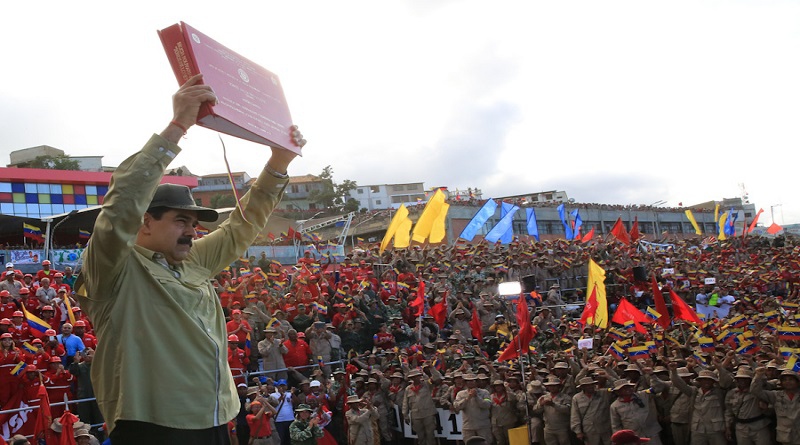 Militiamen and women were out in force on Sunday to commemorate the seventh anniversary of Hugo Chavez’ last public speech. (VTV)

Venezuela’s Bolivarian Militia has grown to 3.3 million men and women, surpassing the target for 2019. The body is due to be legally incorporated into the Armed Forces as a “combat unit.”

The announcement was made during activities held over the weekend for the Day of Loyalty, which commemorates the last public speech given by late President Hugo Chavez in 2012 before he passed away from cancer in 2013.

Speaking from La Guaira State on Sunday, with 30,000 militia members in attendance, President Nicolas Maduro told the country that 2020’s goal has been established at four million enlisted members.

“Today is a day of victory, the Day of Loyalty and love towards Chavez,” Maduro said in a televised address, adding that the 3.3 million members had expressed their pride and patriotism by joining the militia.

During the event, the President also informed that his government has prepared a reform to the 2008 Law of the Bolivarian Armed Forces, which will see the Militia formally incorporated as a “combat unit” into the Armed Force and will have constitutional recognition. The militia is currently classed as an “auxiliary” branch of the Armed Forces.

“The Bolivarian National Militia is the people in arms, it is the genuine expression of civic-military union,” Maduro explained upon unveiling the document.

The activity also saw Maduro swear in thousands of new militia members, as well as awarding numerous decorations and promotions.

Similarly, Militia members and workers of the heavy industries of Venezuela’s eastern region gifted him a 7.62 mm Mosin-Nagant rifle, which the President described as an “excellent present.”

Venezuela’s Bolivarian Militia was formed in 2005 and granted autonomy in 2008 by Hugo Chavez. During the successive governments of Maduro and under growing foreign military threats against the country, it has expanded rapidly both in numbers, scope, and importance, attracting millions of civilians. During 2019, it has been granted a number of new tasks and responsibilities.

According to the president, the Bolivarian Militia is now conformed of 1,141 territorial Popular Defence Groups (ADI’s) and operates out of 14,383 Popular Bases of Integral Defence.

According to statements made in November, the organisation possess 321,433 firearms. However, Maduro indicated on Sunday that he will increase this amount, pledging that every militia member should be assigned a weapon.

Last month, 6950 militiamen and women were deployed to safeguard electrical installations following government claims of “sabotage.” The militia members were also charged with cleaning, maintenance, and forest fire prevention in areas around the installations as Venezuela enters its dry season.

The government likewise announced that thousands of militia members would be deployed on the streets until December 31 to “keep the peace” alongside forces from the police and the Bolivarian National Guard during the holiday period.

Likewise in November, Maduro ordered Militia members be incorporated to the Armed Forces’ Bolivarian Military University, as well as the creation of an “Anti-Imperialist School” for all of the country’s militia members to train them as “professionals.”

The militia was also incorporated into the CLAP subsidised food distribution program in May as part of efforts to crack down on corruption, distributive irregularities, and reselling of the subsidies food products. The CLAP program benefits over six million Venezuelan families and has been targeted by US sanctions.

Apart from its military responsibilities, including training and education, the organisation is also carrying out a National Population and Housing Census, working alongside the Productive Workers’ Councils, and embarking on a series of agricultural projects to grow fruit and vegetables.

Edited by Ricardo Vaz from Caracas.