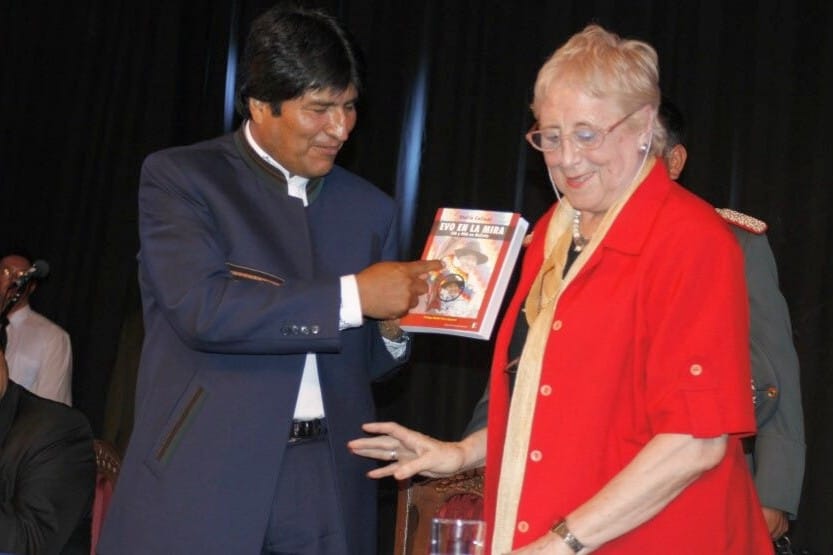 Contexto spoke with Stella Calloni about the current situation in Bolivia, the assassination attempts against President Morales and the re-edition of her deep investigation into the relationship between the United States and the Bolivian coup plotters.

What is the current situation in Bolivia?

The de facto government in Bolivia is presumably trying to call elections without creating the necessary conditions for them to be carried out, but it is logical that this should be so because it is a coup d’état and they are managing everything in terms of what the coup plotters themselves need.

All this is happening in the context of a real hunt, where terror has become a daily occurrence, there are forced disappearances and it is reported that there are people who were arrested by the military or by the Security Forces and then killed in terrible ways, even reports that people have been thrown from helicopters.

Under these conditions it is impossible to hold elections. Moreover, if the MAS wins, will the coup plotters accept the victory?

The coup plotters say that they are “a transitional government,” but they are appointing new officials in the embassies, something that is totally contradictory to that discourse.

What was Washington’s role in this coup?

The coup d’état in Bolivia was prepared and managed from the United States, and orders are given from there. That’s why Washington so quickly recognized the self-proclaimed Jeanine Áñez as “legitimate president”.

In a recent speech, Mike Pompeo, Donald Trump’s secretary of state, said that his country is only going to recognize “legitimate governments,” and that means in reality that it is only going to recognize governments that respond to its interests, whether they arise from treason, like that of Lenin Moreno, from fraud, like that of Honduras, or from a coup d’état, like the one that is now established in Bolivia.

In your book you reported the attempted coups d’état in Bolivia promoted by the CIA, the DEA, USAID and the U.S. Embassy in coordination with the reactionary right in that country.

In Bolivia there has always been terrible U.S. interference. This interference was so blatant that, until Evo Morales came to power, the CIA had an office installed in the Government House itself, next to the presidential office.

Now we see the same type of coup as in 2008, with the participation of the paramilitary groups of Santa Cruz de la Sierra, the Cruceñista Youth Union and the Cívicos. All the groups that always collaborated with all the dictatorships in Bolivia.

In 2012 there was a police riot in Bolivia that was advancing what this coup would be, because there the police acted in combination with the sectors of Santa Cruz de la Sierra. That attempt took place almost at the same time as the coup in Paraguay against Fernando Lugo.

What role did the foundations and NGOs aligned with the United States play?

The role of the NED, UnoAmérica and of all these foundations that have invaded Latin America was evident in the attempted coup d’état of 2008 and in the current coup. This is part of the modality with which coups have been conducted in the region over the years.

Evo in the spotlight. CIA and DEA in Bolivia demonstrates this coup strategy and furthermore it denounces what has happened for decades in that country, where, before Evo’s arrival to the government, Bolivia lived a true apartheid, just like South Africa, only it was against the native peoples here.

The whole region seems to be under siege of the new onslaught from the United States.

In the continent a kind of Cold War is taking place. A war of colonial occupation, counterinsurgency and low intensity. But one clarification that needs to be stressed is that there is no Condor II here, this is much more intense than the operation carried out during past dictatorships. That was a criminal pact of the regional dictatorships coordinated by the United States with the concrete objectives of kidnapping, disappearing and assassinating very important leaders. This is much bigger and involves absolute control of the region. It is a project to recolonize the entire continent.

Will there be a re-edition of your book?

Yes, on Sunday, December 8, the daily Página/12 will publish a new edition with an introduction in which an analysis of the current coup against Evo is added.