“It was a Friday, November 15, and we came, thousands of us, in a peaceful March from el Trópico, when we were blocked at Puente Huayllani, in Sacaba, and prevented from continuing with our Whipalas – the flag of identity and self-esteem of the indigenous peoples – on our way to Cochabamba. The police told us: wait, in half an hour we would be able to pass. But then four or five war planes appeared to frighten us and, out of nowhere, soldiers began to gas us from helicopters and open fire with their rifles. We had nothing to defend ourselves with or any way to protect our families. There were children. So far there are ten dead, more than 200 wounded (80 percent from a bullet) and nine comrades continue to be humiliated daily,” said Juan Fernandez, who coordinated the arrival of parents, widows, orphans and neighbours who joined the demonstration of solidarity for justice.

Where the coup plotters’ state terrorism has shown all its cowardice, the families of the victims took the initiative on Monday and, in the midst of a sea of flowers, tears and hatred, demanded justice and an end to Jeanine Áñez’s dictatorship in Bolivia. At the same time, they demand the immediate arrest of Luis Camacho, the fascist from Santa Cruz de la Sierra, and former president Carlos Mesa, for their actions at the head of the criminal gangs. 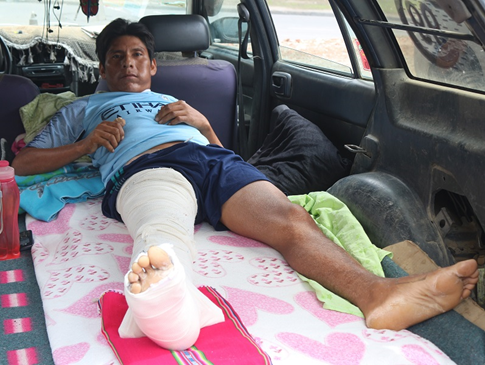 Juan takes me to see his brother, Leopoldo, who lies in a car about 50 meters from the rally. He cannot move, his leg has been completely destroyed by a bullet of large caliber that the coup government continues to claim was never fired.

“I am shattered by weapons of war. I have a terrible fracture and I can’t walk, I can’t sit or go to the bathroom. I feel nothing,” said Leopoldo Fernandez, who “was a radiotaxist in Eterazama, four hours from here and came to protest for what is ours and was taken away from us.

Along with him, his wife Marina Orella carried his son Johan, one of the couple’s four, in her arms, describing “the horror that has been these days, when Leopoldo cannot go to the bathroom, walk or smile, because he is traumatized. I take care of the little ones and there is no one who can bring money into the house. “Even my children are traumatized, they are small and cry all the time. We all feel very hurt, because people don’t know about this bloodbath and the size of this pain. The media don’t say anything, they don’t report anything, and that’s unfair,” she said.

Marina remembered “all the horror” of that Friday, because she thought her partner had fallen, like so many others. “He called me and could only say two words to me: I’m hurt.” Imagine the hell it was from those hours of anguish. Now we are struggling to survive,” she reported.

Reign of impunity and terror

According to the official record, the number of demonstrators killed in the various “clashes” – in which not a single member of the “forces of law and order”, policemen or soldiers lost their lives – stands at 36 across the country. According to the Citizenship and Human Rights Commission of the Mercosur Parliament (Parlasur), as of last week there were 832 wounded and 1,513 detained.

The Commission also denounced the “declarations, speeches and attacks of racial hatred against the country’s indigenous peoples, especially their women and their symbols”, as well as the “serious threats, physical aggressions and destruction of homes”, always “directed against parliamentarians and social leaders, officials and leaders of independent state institutions and national bodies for the promotion and protection of human rights”. Strongly condemning the coup against President Evo Morales, re-elected on November 10, the Parlatino delegation also warned of the government’s “persecution of national and foreign journalists” in an attempt to prevent the truth from coming to light, as occurred with the impediment of several Argentine television crews.

I wanted to continue listening attentively to the stories of the Fernandez family, when Juan himself told me that we had to leave. At first I didn’t understand the reason, which was quickly clarified. When I turned around, I discovered that the concentration of flowers was just a front for a meeting, that I would meet with dozens of affected people and spend the day listening to reports of the monstrosity.

A farm machine operator, Herman Maldonado, lost his left eye, hit by bullet fragments. “I was in a lot of pain, bleeding and crawling, when the police kicked me in the head. I was blind in one eye and the press here says nothing, all bought, bent on defeating the Movement Towards Socialism (MAS) in the next elections. At the same time, the government wants to prevent foreign journalists from reporting what is happening, a complete lack of respect for our pain,” Maldonado protested. 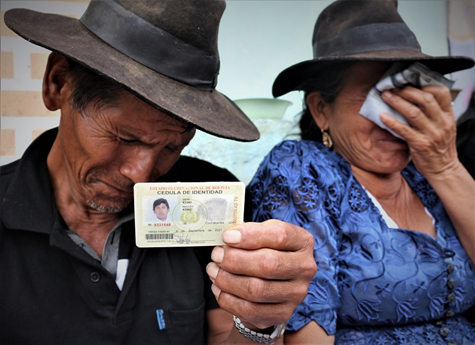 At the age of 18, “studious, friend and dedicated agricultural worker”, Plácido Rojas Delgadillo was the great pride and companion of his parents, Don Telésforo and Doña Catalina. Full of plans and with a long life ahead of him, he would have finished high school this year, but was abruptly interrupted by “penetrating abdominal trauma from a firearm”. He came to Sacaba to protest against the offense against women, since as soon as the extreme right came to power, prejudices and racism, they began to order the cutting of braids, the assault on those who wore polleras (the traditional skirts of the peasants) or carried the Wiphala.

“He came to protest, as is everyone’s right, but he received two bullets. I lost my son because now Justice has abandoned Bolivia,” declared Don Telésforo, crying. “They wouldn’t even let us into the hospital. They killed Plácido because he fought against discrimination against peasants and indigenous people, because he came to defend me and our values,” added Doña Catalina, inconsolable. 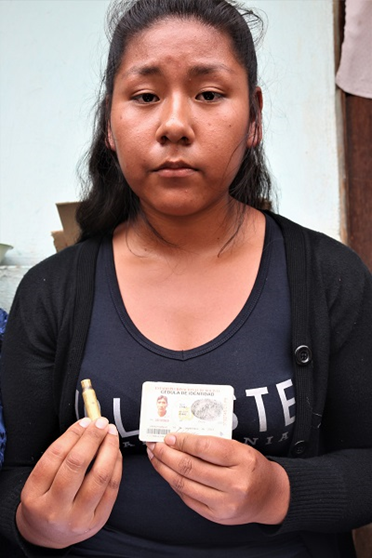 Ana Cristina, daughter of Lucas Sánchez, murdered due to “craniofacial trauma from a firearm projectile”.

Because of a “craniofacial trauma with a firearm,” Lucas Sanchez left four children orphaned: “I will fight for this cursed president to resign and stop discrimination,” said Ana Cristina, one of his daughters. For her mother, Doña Margarita, “it is unacceptable that a self-proclaimed president should feel entitled to commit such a cowardly act, attacking those who only defended our clothing, our rights, our democracy. 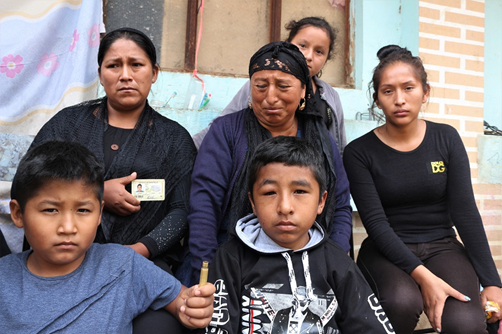 Relatives of Roberto Sejas, who was “shot in the head that came in and then went out. “Let’s mobilize until the damn president leaves.”

Roberto Sejas’ widow, Noemí Choque, summed it up like this: “the bullet went to the head, went in and out. Keeping her pierced hat, Noemí remembered her husband affectionately and said she would honor him by being present at all the mobilizations for “the departure of this cursed president”. Roberto’s mother, Doña Asteria, added that his grandson was orphaned and that now it will be necessary to achieve justice, paying for the child’s studies until he graduates and impunity ends. “May this government have the courage to resign and stop spending on arms to repress the people and pay for the education of my grandson,” he said.

At just 22, Elisa López became the widow of Armando Caraballo Escobar due to “a penetrating thoracic trauma caused by a firearm projectile”. “There were three bullets and that was it. I was left alone, with a daughter and a dependent, children who need me more than ever. I want justice, I need compensation to raise them, but I will never have my love back,” she described. “We lived 14 years free with Evo and now a government has arrived that treats us like animals. We can’t have mercy on these killers,” she said.

Don Ambrosio and the permanent crutch

Lying next to his crutch, Ambrosio Aguilado related that “the police and soldiers were beating us a lot, right and left, so that we could say that they had bought us and that we were receiving money, when in reality we were all in Sacaba protesting voluntarily”. “We came to defend the homeland because we are being massacred. I will be disabled because the gunshot entered and left destroying my right leg, but many families have lost their children and their parents, everything they had. What we demand now is justice,” he emphasized.

Responsible for attending to the families of the deceased, Cacilda Rojas highlights “the relevance of the work of the international press, which is with us in spite of blackmail and pressure”. “Next to us, you can see how the walls are studded with bullets, which was also documented by the International Commission on Human Rights (IACHR). It is necessary to broaden this denunciation because as soon as this president proclaimed herself, they began the burning of Wiphalas, of leadership houses, of community and indigenous radio stations, the persecution of pollera women, and the assassinations,” she said.

Cacilda, representative of the Federation of Peasant Workers of the Tropic of Cochabamba, highlighted that “in the last 14 years, thanks to brother Evo, our rights have been respected in the banks, in the plazas, everywhere”. Unfortunately, he denounced, “today we are no longer allowed to go anywhere, it is outrageous, it is outrageous. On the day of the massacre, they opened fire on a peaceful demonstration in which there were also children and pregnant women, because many people had no one to stay with. Everyone went through a tremendous danger,” she described.

“We weep for our dead, but we’ll come out stronger, they won’t be able to shut us up. The peace accords are not being fulfilled, our wounded and mutilated remain unattended and our prisoners continue to be humiliated,” Cacilda said.