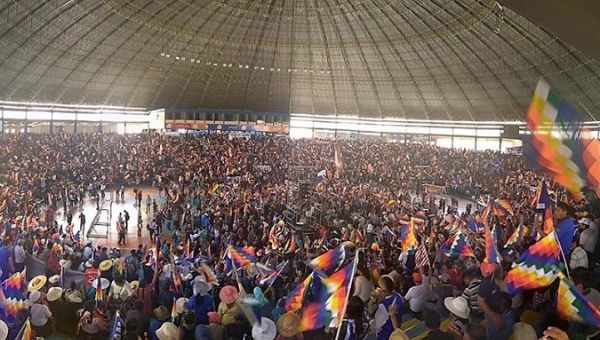 The Movement Towards Socialism (MAS) will define its presidential and vice-presidential candidates.

At a national meeting that brought together hundreds of militants in Cochabamba, Bolivia, the Movement Towards Socialism (MAS) Saturday designated former President Evo Morales as its campaign director for the 2020 elections.

“I am surprised by the great meeting held by the ‘Process of Change’ organizations and militants who, with their unity and joy, thrill supporters of our democratic revolution,” Morales tweeted.

“Congratulations brothers and sisters, I wish you many successes.”

I appreciate the trust you’ve placed in me for making me campaign manager. We will elect a unitary candidate and again win the elections in the first round. Thank you for not abandoning me, I will always be with you. Together we will continue to make history as we have done until now. Together we will win!

On Saturday, besides discussing the core aspects of what its 2020 political campaign will be about, the MAS congress will also define its candidates for the presidency and vice-presidency of Bolivia.

“The important thing is to continue the process of change,” Morales said referring to the MAS Congress, which is Bolivia’s largest and best organized political organization.

Bolivia’s former Health Minister Gabriela Montaño reported that the MAS leader will be received by a Cuban medical team that had previously treated him.

In 2017, Morales was operated on by Cuban doctors who performed an intervention on his nostrils and, shortly after, on his knees.

Morales’ stay will be temporary, as reported by the Foreign Affairs Secretary of Mexico, a country that offered political asylum to the socialist leader after the coup d’etat against him.

In November, he arrived in Mexico after the Bolivian Army requested his resignation amid accusations of fraud following his triumph in the presidential elections held in October.

So far, however, the Organization of American States (OAS) and the coup plotters have not presented real proofs of the alleged fraud, which has been gradually evidenced as the pretext that US-backed right-wing politicians used to get rid of the socialist leader.