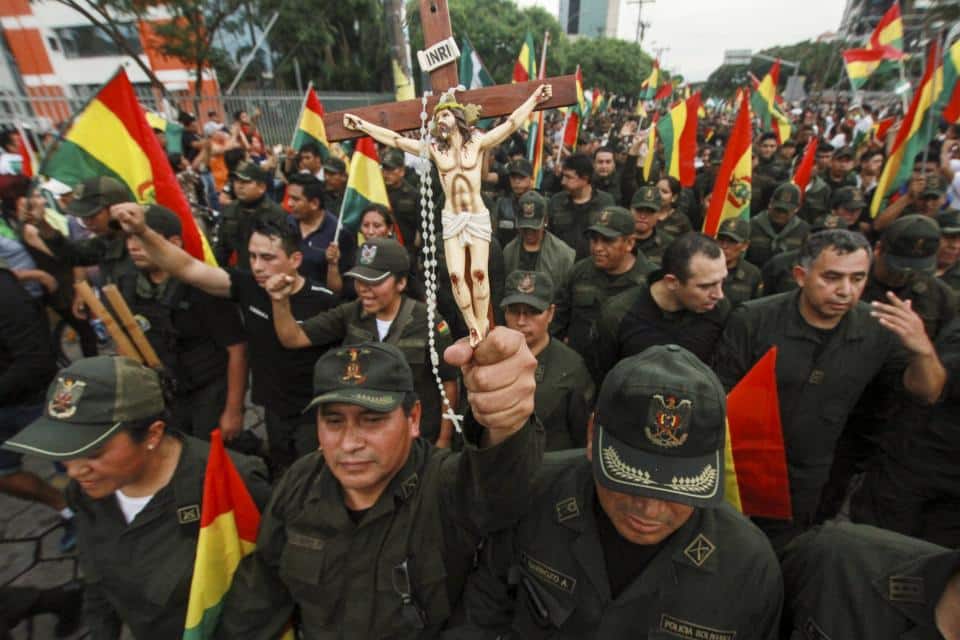 Latin America has become a complex and changing scenario that requires a post-conjectural outlook, in the face of the U.S. advance that has in its agenda new coups followed by political persecution and fascist regimes in the south of the continent.

Not long ago I read an interesting article by sociologist Atilio Boron (“The Coup in Bolivia: Five Lessons“) about five lessons of history and geopolitics that we in Latin America refuse to incorporate as long-demonstrated axioms. An exercise that we can no longer postpone for our survival and regional overcoming. Boron states in his text that these five lessons are also “manual”. That is to say, basic in supreme degree. The article explains that the etiology of our sovereign collapses does not reside in economic failures, nor in organizational absences as States, but in the manifest will of an imperialism that does not rest and that renews its tactics, improving them decade after decade, enhanced -among many other factors- by an incomprehensible inaction on our part in key moments of history.

But… why, in the face of repeated defeats and their evident lessons, do we insist on not creating effective antibodies against a methodical and criminal hegemony? What is the reason for not taking the necessary precautions – the most elementary, Boron would say – in order not to replicate history, as is happening now with Bolivia?

Of course the answer is Gordian complexity and to answer these questions would not be enough for this article. Not even a dense essay. What is clear is that there are minimum tasks, affordable options and elementary structures that decolonial Latin America could address. Hugo Chávez and Fidel Castro demonstrated that sovereign scaffolding can be built and that with political will and a spirit of active confrontation it is possible to generate liberating instances: the Union of South American Nations (Unasur), the Bolivarian Alternative for the Peoples of Our America (ALBA) or the Community of Latin American and Caribbean States (Celac), or the boycotted Bank of the South proved it.

On the Bolivian side, this vision of the possible was seriously neglected in the continental strategic field, with clear repercussions on the regional chessboard when the very healthy premise of “internationalist fraternity” fell on deaf ears. Our American sovereign axis, refractory to external interference and subordination schemes, was affected by these omissions by the MAS-IPSP government, affected by a certain strategic autism that was notable, especially in recent years. Bolivia’s salvation was united, never isolated, by the highest macro and microeconomic indices that could be in its statistical table.

As an illustration, the government of Evo Morales assumed that by implementing the Juan José Torres Anti-imperialist School for the military sectors – a great and revolutionary initiative – was enough to inhibit the colonial influences of the Pentagon and the State Department, which have been poisoning our institutions for decades. While it is true that the expulsion of the Drug Enforcement Administration (DEA) and the United States Agency for International Development (Usaid) and the closure of the U.S. embassy in Bolivia were courageous and tactically positive decisions, they were clearly insufficient.

This oversight contributed to the policies of harassment and overthrow that the U.S. deployed since the inauguration of Mauricio Macri, Jair Bolsonaro and Lenín Moreno. The lack of pecuniary contributions of a neoric Bolivia to the sovereign support of Bolivarian institutions was also determinant and functional to Washington, which worked intelligently to minimize Unasur. This objective reached its zenith in 2018, when on April 20 of that year Argentina, Brazil, Chile, Colombia, Paraguay and Peru suspended their participation in the organization due to the situation of acephaly. An acephaly, of course, induced from the Pentagon, which ordered the governments of the most submissive and genuflected right (with Moreno at the head) to disregard their obligations to the body.

On the other hand, the coup d’état in Bolivia -consumed progressively since the October 20 elections- although it is framed as a hybrid coup, typical of the Fourth Generation War of the 1990s proposed by strategic North American researchers such as Joseph Nye, or described by the Chinese colonels Qiao Liang and Wang Xiangsui, in their book Irrestrictive War: New Concept in a Globalized World, we saw that the final resolution of the coup came very close to the traditional canons implemented during the twentieth century: insubordination of the FF.AA, self-quartering and taking emblematic buildings as a symbol of the new order imposed by force.

Although there were components of the unrestricted war proposed for the new century (use of networks for massive disinformation, deconstruction of the presidential figure through neuronal attacks on public sentiment -Evo and MAS are contrary to Christ- or inoculation of prefabricated discontents in a population benefited by the policies that they attempt to destroy. The U.S. finally had to buy the military commander – in charge of General Williams Kalimán Romero, Commander in Chief of the Army – and of the police chiefs throughout the country. Tactics similar to those used in Ecuador in 2010 to try to overthrow Rafael Correa. In other words, the coup in Bolivia had a lot of traditional Hard Power. Imperial methodologies that Latin American history grimly reminds us of with a superficial review of its worst coup tragedies (Guatemala in 1954; Dominican Republic in 1963 or Chile in 1973, to mention a few episodes of rupture of our institutionality on account of the northern superpower).

Under this gaze, Evo Morales’ indigenous revolution ignored the whispers of history and by the time the coup struck, the minimum antibodies necessary to defend the democratic process begun in 2005 were not organized. No indigenous group, no workers’ or coca growers’ union, nor grassroots movements were armed or organized to resist and defend the Plurinational State that had been in the imperialist sights since its beginnings. Even though Washington had begun to give clear signals of its intentions since 2016, after the mediated defeat of the referendum for Evo’s re-election.

Undoubtedly, this lack of observance of history, of the strategic constants in the U.S. hegemonic dynamic in our region, cost Evo Morales his presidency and Latin America a fundamental pillar in the continental struggle. For these same reasons, the article by Atilio Boron quoted above indicates very wisely that we should study the “manuals published by various U.S. agencies,” because in them are written the road maps of our domination and plundering.

Faced with this primary analysis that the Latin American political path itself dictates to us with overwhelming eloquence, we must ask ourselves some questions: Didn’t the MAS-IPSP apparatus weigh the magnitude of its emancipatory offense against a foreseeable hegemonic in its counterrevolutionary devices? What place did Evo Morales give to the oligarchic reaction financed and supported communicatively by the United States? Is it logical for a government confronted with all the imperial powers to remove from its equation the armed defense of its own internal process?

These questions are answered on their own in the face of another question that provides unambiguous clues: Why hasn’t Venezuela fallen yet and Cuba successfully resisted for 60 years? Among many of the factors that explain it, in both cases one unavoidable factor exists: the popular defensive architecture of these governments.

In the case of Cuba, the Committees for the Defense of the Revolution (CDR) were insurance against the constant external destabilizing attempts. The CDRs allowed any overlapping metastases to be inhibited for decades, even today. It is not in vain that the slogan of the CDRs is: “With our guard up”. This is a premise that Evo Morales ignored. Or at least he did not grant it the real status that circumstances demanded since he set foot in the Palacio Quemado.

In Venezuela, on the other hand, it was the civil-military union promoted by Hugo Chávez and the Bolivarian Militias, which act as a guarantee of a secure Vietnamization in an eventual armed conflict with the United States. Even in Venezuela these militias are atomized for the defense of strategic national companies, with the so-called “combatant corps”, which guarantee the functioning of each productive entity, at the same time that they would be involved in an eventual scenario of internal-external aggression.

For several strategic thinkers in Washington, such as the influential Thomas Barnett, among others, this 21st century should be characterized in geopolitical terms by a growing balkanization of Latin America. To create, plan, deepen and finance internal conflicts, propitiating territorial divisions such as that of the Bolivian Eastern Crescent (suffocated by Evo Morales in 2008) and increasing instability in the region in order to avoid any systematisation in the defence of its resources. The destruction or severe deterioration of our Nation-State, as has been the case in Africa since its decolonial processes in the 1960s, would generate an enhanced access to resources and to the application of submerged strategies, and would optimize them.

Seen in perspective, the wars in the former Yugoslavia -then Libya and now the war in Syria- have provided an effective testing laboratory that has been repeated since then in different global scenarios with nuances. For Latin America, this is the mirror of the future. The clear reflection of what the US military powerhouses -the Rand Corporation or the Council on Foreign Relations, among others- plan for the South American region, which is currently in dispute in the new multipolar scheme.

Although there are more domestic interpretative lines for the coup in Bolivia (Brazilian pressures for local energy dominance, or the interested Chilean boycott of the Bolivian Bioceanic Corridor project), the truth is that Bolivia is at the center of the South American Silk Road proposed by China, as a neuralgic point of the interoceanic corridor and the Transoceanic Railway (FTO). All these factors elevate the country as a first-order territory in the geostrategic dispute between China and the United States, and also in its own terrain, according to the Monroe Doctrine. Not to mention the bid for lithium and the imminent partnership with Chinese companies for its industrialization on Bolivian soil that Evo was negotiating. Instances that undoubtedly accelerated the mechanisms of the coup.

Thus, it was imperative to turn a country like Bolivia -which led the world indices of economic growth, social inclusion and wealth redistribution- into a quasi-failed state where today crimes against humanity are committed, sponsored and silenced by countries that have achieved, once again, their traditional objectives: to submerge a peripheral nation that succeeded in breaking its ties to the asymmetrical global capitalist system.

3] Author of Strategic Essays: The New Map of the Pentagon: War and Peace in the 21st Century, published in 2004, and Great Powers: United States and the World After Bush, published in 2009.

4] and On this concept, see the very interesting article by Sputnik News: https://mundo.sputniknews.com/firmas/201804241078149841-caracas-paises-occidentales-desintefracion/

5] The New Silk Road is one of the main global projects of the current Chinese government of Xi Jinping. Its official name: Yīdài yīlù (One stripe, one route). What is known as the Belt and Road Initiative (BRI).