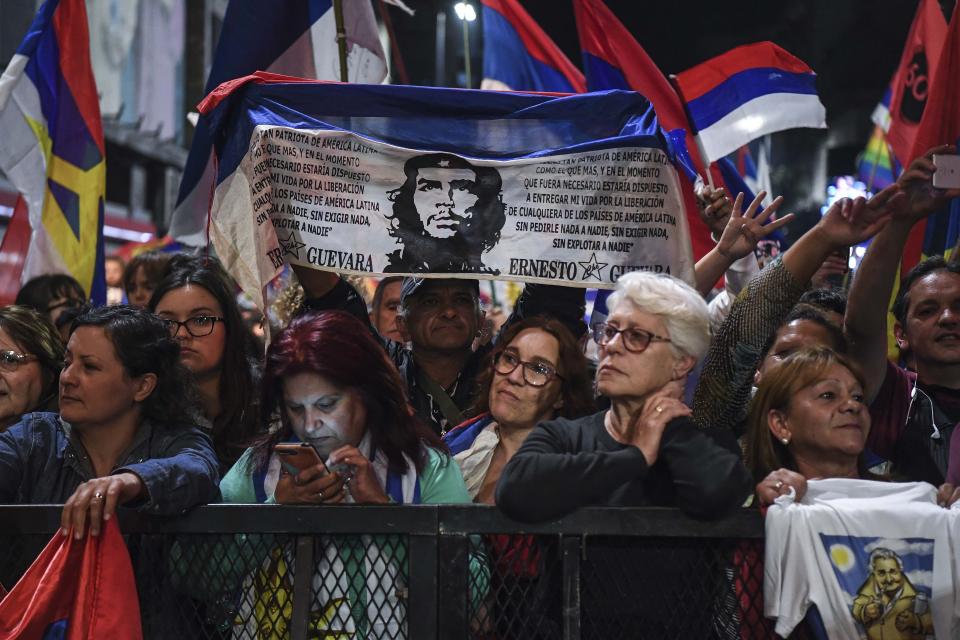 Pagina 12 talked to analysts Atilio Boron, Hernan Patiño Mayer and Oscar Laborde about their views on what’s next in Uruguay following the victory of the National Party’s Luis Lacalle Pou in presidential elections; including its local political situation; its relationship with Argentina; Mercosur; the Rightward shift in the continent; and the results of 15 years of the leftist Frente Amplio or Broad Front.

Thinking on the political scene unfolding in Uruguay with the victory of rightist Luis Lacalle Pou, Political Scientist Atilio Boron commented the contradictions of the alliance that is going to rule the country starting next March. “I don’t see any perspectives for a long right-wing cycle in Uruguay. This is a coalition created for short-term tactical convenience. It is made up of political organizations critical and intent on harming each other, as is the liberal Colorado and the conservative Blanco parties that has a coup monger sector headed by Guido Manini Rios,”. Hernan Patiño Mayer, former Argentinean Ambassador to Uruguay, noted that the National or White Party will be compelled to reach agreements with its opposition. “The country remained divided into two fractions. This will lead to forming a national agreement government. Different to Argentina, where a condition of parity was tried to be portrayed in the presidential election result, the difference between the two main candidates in Uruguay is just one percentage point. That will force the government to reach an agreement that can be expressed in the parliament,” Patiño Mayer explained. Nevertheless, Boron commented that the winning alliance will be able to pass laws with its own quorum given the large amount of lawmakers they gained. If the coalition remains at all.

Concerning the rise of the right-wing in the South American continent, Argentina’s representative to Mercosur Parliament, Oscar Laborde noted that such they have gained some courage. “They are not concealing their ideological content. They actually lost their inhibitions. There is a level of boldness among the Right. They used to be careful but now say whatever they want. On the contrary, the Left seems to be more moderate,” Laborde stated. “There is not a change of era. This is a moment of dispute. Neoliberalism cannot be virtuous in matters of elections. So the military sector appears wherever the rights barefacedly says that soldiers should intervene if they feel like doing it. This is a moment of dispute and that is how it is being expressed,” Laborde remarked.

Perspectives for the Regional Bloc

Concerning doubts cast on the continuity of the Common Market of the South, Mercosur, and the possibility of reaching regional integration, Patiño Mayer noted the importance of revitalizing the economic bloc. “Concerning Mercosur, the fact that Uruguay might undertake neoliberal measures will depend largely on what Argentina will propose as integration policy. Argentina’s President-elect, Alberto Fernandez, has the responsibility of reestablishing Mercosur. It has to be revitalized. Building this bloc as a factor of power is an essential mechanism. No matter how strong it is, no country in the region will be able to act in an isolated way,” Patiño Mayer said.

Despite ideological differences, Laborde had some confidence on pragmatism to give a boost to commercial relations. “Integration in Mercosur is going to continue because it deals with economic issues. Regardless of (Brazilian President Jair) Bolsonaro’s broadsides, trade volume with Brazil didn’t change. It is doubtlessly convenient to negotiate at a regional level. Brazil as Argentina traded with China and Russia unilaterally and that weakened the region’s possibilities. So I think there will be pragmatism out of shared convenience,” Laborde commented. “Alberto Fernandez will have the challenge of taking part on regional integration in a very different moment compared to (former President) Nestor Kirchner’s. I think he is going to be pragmatic, as well as the governments of Uruguay and Brazil are going to seek economic agreements. The social agenda is going to be left for another moment,” Laborde remarked.

Atilio Boron in turn stressed how important it is for Uruguay to keep its foreign policy along historic lines. “Uruguay will have to swing between the politics in Brazil and Argentina. It does not have a lot of room to maneuver. So far, its government has kept a positive attitude regarding Bolivia and Venezuela. I would think Lacalle Pou will not change this foreign policy paradigm,” the political scientist said.  “Uruguay is going in the other direction in a moment when we see the end of the neoliberal cycle in Latin America, as it’s happening in Chile. And it was via elections, what makes the defeat more painful,” said Boron.

As the Broad Front was defeated, 15 years of progressive government is reaching an end in Uruguay. But Boron highlights the historic importance of this front for Latin America’s left. “It’s historically important how the Broad Front remained in power regardless of its diversity. They made important reforms. Amidst neoliberal waves, they kept their main role in the State’s social security. Some important feats have to be acknowledged. Regardless of its defeat, they have a positive balance and we are encouraged about their return soon to government,” Boron said.