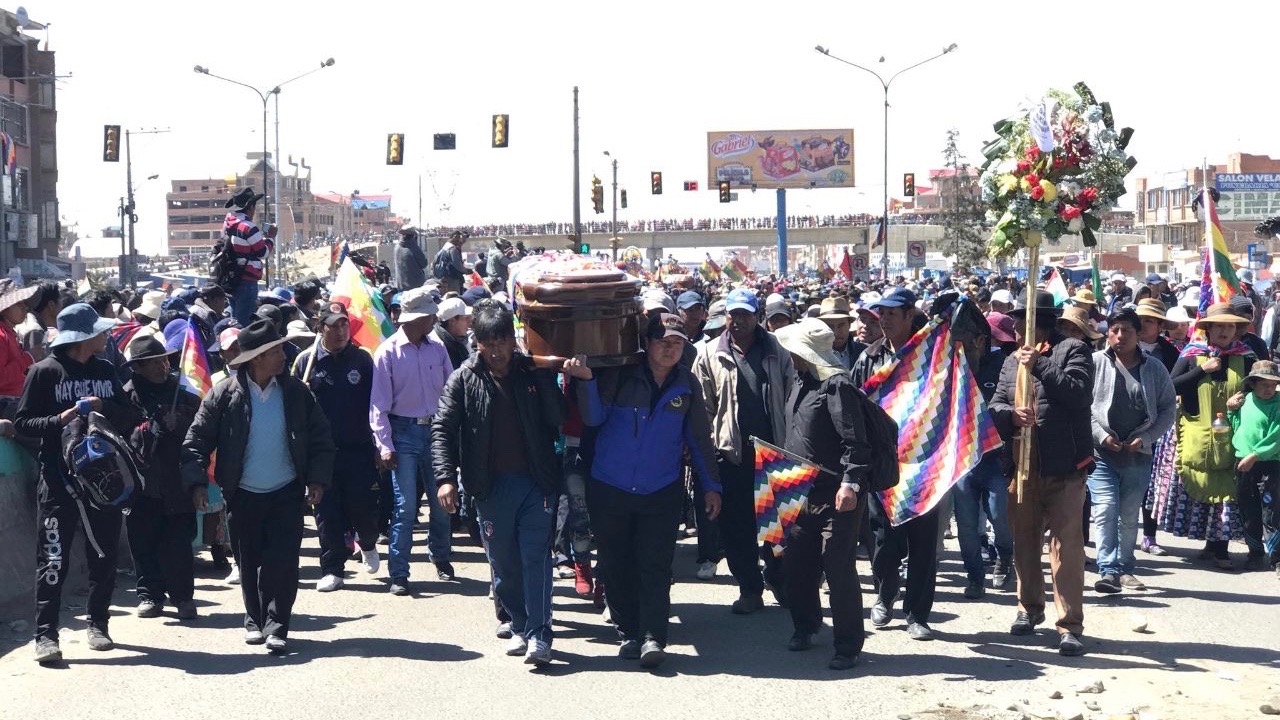 Bolivians march with the coffins of those assassinated by security forces to denounce the massacres in Senkata, El Alto and Sacaba, Cochabamba.

It has been over two weeks since the coup d’état which forced the resignation and exile of President Evo Morales and Vice-president Álvaro García Linera. Since then, thousands of working-class and Indigenous Bolivians have been resisting on the streets the coup and the illegitimate government of Jeanine Áñez. They have been met with extreme violence from the Armed Forces and the National Police, over 30 have been killed, hundreds injured and hundreds have been arrested.

On Monday night, a new agreement was announced reached between the de facto government of Áñez and the legislators from the Movement Towards Socialism (MAS) to hold elections in the country in the next 3-4 months.

Peoples Dispatch spoke to Marco Teruggi, an Argentine sociologist and journalist who spent several weeks in Bolivia before and after elections were held in order to understand the agreement reached on elections and the state of resistance in the country.

Peoples Dispatch: Starting with the most recent, what do you think about the agreement that MAS made with the de facto government of Jeanine Áñez? Did they have another option? Was there enough force on the streets and in the Assembly to achieve anything else?

Marco Teruggi: The first thing to keep in mind is that in the design of the coup d’état, from the beginning, the possibility of an electoral solution was always contemplated in order to gain legitimacy.

If you had to arrange it in steps, there is the first step which is the overthrow, a second step which is the creation of a de facto government, and all of this accompanied by persecution, repression and massacres. The third moment is the call for elections and the fourth moment is when the elections themselves happen.

This was always proposed in the basic design, it was never about an old-style coup d’état where a de-facto government is installed for an undetermined amount of time, but precisely part of its presentation was to show itself as a democratic process, recognized internationally, under the condition that later they would go to elections.

It was always expected, the question was in what moment, with what conditions, both for the coup supporters and for those who are confronting it. In this sense, this issue was being discussed in the Assembly, where MAS has a majority, and as they had been announcing, they gave the OK for an agreement, in law, to call for elections, wherein the results of the elections of October 20 are also annulled.

I think that just as it was clear that the coup strategy counted with an electoral resolution to legitimize itself, it also was clear early on that the strategy of the MAS legislators was to hold these elections in the most favorable conditions possible. Basically that MAS could present itself in the elections, which it achieved, and with guarantees for Evo, not to participate, but to prevent political-juridical persecution. And also the retreat of the soldiers, for them to return to their barracks, and that the decree which exempts them from penal responsibility in operations of “re-establishing order” is withdrawn.

As such, it is not surprising that MAS has said yes to the elections because it was not going to be possible to remove Áñez through street pressure, even though the actions on the streets conditioned the initial strategy of the coup. It is very important to keep this in mind because otherwise, one could think that MAS proposed a change of tactics, of strategy. But no, it was always the electoral solution, and either way, the streets were an important component to accelerate this process on both ends.

For me it is very worrying that there was no coordinated strategy of resistance to the coup, the coordination with the legislative power was very minimal, there were movements exerting pressure in the street, but there was no coordinated space of resistance. There were movements, uprisings, and massacres, but there was no clear roadmap due to the time and difficulties and weaknesses in the process of change. At the same time that MAS was signing this agreement, there were various movements that were also sitting down in dialogue with the de facto government, and the last step was on Monday night. For example the Bolivian Workers’ Center, also signed an agreement with the de facto government. So, this result was predicted, but I think that it’s happening in bad conditions with persecution, assassinations, exiled comrades, but it’s not surprising.

PD: What does it mean that nor Evo Morales nor Álvaro García Linera can participate in elections?

MT: It is clear that one of the objectives of the coup, not only the strategy in Bolivia but in general in the strategies in Latin American countries is to aim for the head of the processes of change. We saw this with Lula in Brazil, even with Correa in Ecuador, and the same with this case with Evo and García Linera.

This happened for several reasons, not just because of the evident role that they can have in terms of being a unifying force or because of the role in terms of leadership of the processes, particularly with Evo in this case, but also because when they are able to behead the leadership of the process, it opens up, logically I think, a process of dispute between the movements to see who takes over in terms of the direction or candidacy.

So this figure that united people, like the case was with Evo, he was taken out and the question now is how is a joint strategy created for the elections where several people will have presidential aspirations. I think this was very clear in the coup strategy, to take out the leadership.

Also, I think that taking into account the wear of the process, the wear that has been growing since the referendum of 2016, the wear due to the management of the results from October 20, and people are also tired of the figure of Evo. So more than the force of Evo, I would say that there is a rejection of the coup d’état and a reaffirmation of a large section of the population about the Indigenous question, about the class question, about the demands of the movements, but they do not necessarily have Evo as the center of gravity. So all of this will be put into action with great tension, and we hope that there will be a unified resolution in order to have a response in the electoral sphere.

PD: You mentioned that what happened in Bolivia in the past couple of weeks, culminating in this agreement, was effectively a successful experiment for North American imperialism…What did they achieve in these weeks? What does this mean for the continent?

MT: I think that first it is important to point out that who was behind the coup was evidently the United States, with the strategy, the funding, and behind the OAS (Organization of American States). And the coup in Bolivia, combines many coups at the same time, it combines the logic of coups that were used in Paraguay against Lugo, in Honduras against Zelaya, against Dilma in Brazil. It is the overthrow of the leader with the discourse that it is possible or necessary, then transition, electoral resolution, and the re-legitimization of the government that continues.

This is a mechanism that in this case, was applied very quickly, where it also combined with elements of the strategies of street violence employed in Venezuela and there is actually a direct connection between concrete actors there. If you look, what happened is the same thing that Guaidó announced nearly one year ago when he announced the end of the ‘usurpation’, the transition government, and free elections. It is almost the same formula but in this case in Bolivia it was achieved.

This is a very important success for the United States not only because Bolivia will be realigned and dispossessed, in the case that the coup supporters win the elections, but because it shows that today there is capacity to carry out a coup d’état and for it to be legitimized on an international level. If you look beyond the evident support of the United States and Almagro in the OAS, which is an echo chamber and an arm to execute the North American style policies, the European Union did not condemn what happened either, they never said that there was a coup d’état. And unsurprisingly, neither did the right-wing governments on the continent.

It went well for them because there was no international rejection of the coup d’état in Bolivia. Of course there were clear expressions of condemnation, like with the government of Mexico, of Argentina, from the social movements, from personalities, human rights defenders, of an endless number of actors; but the actors of diplomatic political weight largely supported it.

PD: What are the next steps? What do you think will happen on the streets, will the people continue resisting? Will the militarization and persecution continue?

MT: I think that keeping in mind the latest announcements of the agreements signed with an important part of the movements, for example, the COB is working on this ‘pacification’ roadmap which is to take the soldiers off the streets and lift the blockades and end the strike. So I think this is what the situation will look like, of course with focal points of resistance with movements like the Federation of the Tropic which will maintain a level of conflictivity and street confrontation.

In general, there will be a process of reduction of the social conflict on the street, with a high cost of dead, which is accompanied by a lot of impunity, a lot of pain, which will be even more complicated for the coup supporters to resolve. But for the moment without a leadership that is pushing for an increase in the level of pressure against the coup, and without the MAS legislators’ support on this approach, the most probable resolution is that this will end in the way that the European Union, the United Nations and other international actors have been pushing for.

It is not necessarily the plan of legitimizing the coup while there are those that see it this way, but for those in MAS it allows for the correlation of forces in a political space where it is very difficult to consolidate a unified position, where it has been difficult to have leaders that can coordinate between the streets and the Assembly, and this is not just now with the resistance but even with the coup this became very clear.

So I think it is probable that the confrontation on the streets decreases, but this does not mean that the persecution will stop, or the arrest warrants or the black lists, this will continue.