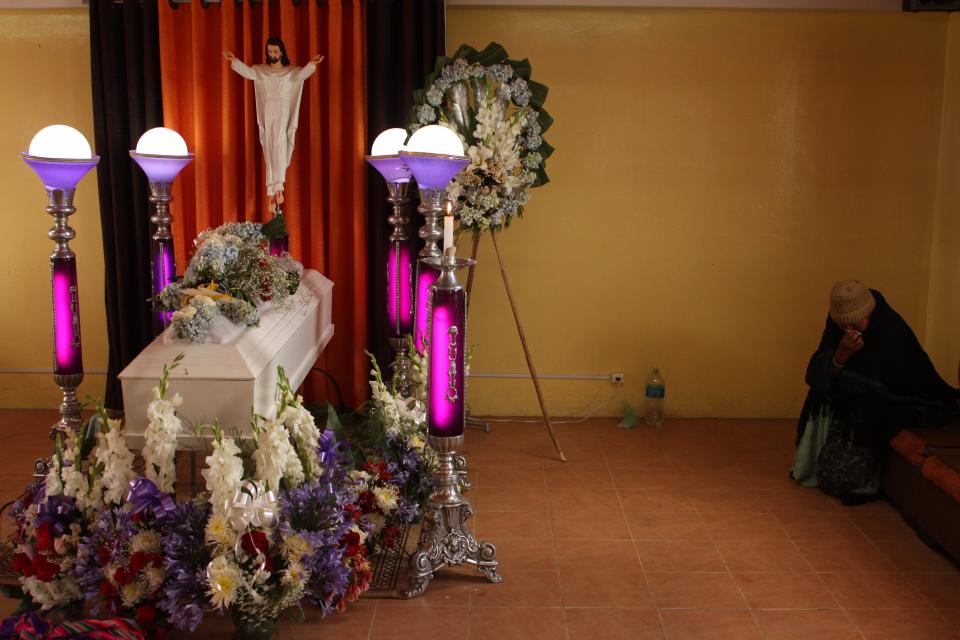 Funeral of one of the victims of the Senkata massacre. Image: Pablo Aneli

In El Alto the blockades continue because the deaths are too many. Página/12 witnessed the heartbreaking testimonies of the victims of the repression before the Inter-American Commission on Human Rights.

“Like animals, like dogs, like partridges; that’s how they hunt us,” says Ixalta Aliva, banging his hands against the apron that protects the silver of his skirt. From one of his pockets he takes out a photocopy, the identity document of a boy of 15, Jesús Aruhiza, hospitalized with his jaw destroyed by a bullet. “Are we animals?” He insists on asking as if he were crying out to the same sky from where, countless testimonies say, bullets rained on November 19 in Senkata, in El Alto, where the feet become entangled in the residues of wire and soot left by burnt rubber, where, against all propaganda that insists that there are no more blockades in the urban cordon of La Paz, there is a blockade because the deaths are too many, because less than 20 meters from where the cholas gather, there is a young man who is being veiled in his white box. He died on Saturday night, he has just joined a list that has not yet been closed.

At the same time the life of 24-year-old Milton David Centeno Geronda ended; In the center of La Paz, the plenary of the Legislative Assembly passed to an intermediate fourth after approving the law that established the next elections for January 22 and not reaching any agreement on the law of guarantees proposed by the majority of the MAS so that the persecutions cease, the victims of the repression are compensated and the decree signed by the self-proclaimed president Jeanine Áñez that granted immunity to the military and security forces to repress and purchase armaments is repealed. On television, especially on the official channel, Víctor Jara’s song, which in Chile shouts in the face of neoliberal cruelty “the right to live in peace,” was constantly repeated. Here in this area, 3600 meters above sea level, it seems like an order of silence and obedience. “That law I will never enact,” said Áñez on Twitter to make the proscription clear.

A sea of unplastered houses that are seen from the cable cars that cross the sky of La Paz separate the center from the Alto. The snowy peaks of Illi Mani and Chacaltaia are sentinels of that profusion of buildings that climb the slopes of La Paz. Once at the top, the traffic is jammed as if cars, trucks and minibuses were pieces of an impossible game. There are huge queues in front of the Senkata distillery, they go in search of fuel and domestic cylinders, huge rows that from Saturday night go through blocks and blocks to the service stations. Several tracks on the six-lane avenue leading to the heart of Senkata are covered with debris and remains of barricades. The last stretch to where neighbours are moving has to be made on foot. From the footbridges that cross from one side to the other of the avenue hang dolls like headless scarecrows, they are there to denounce the massacre that accounts for ten official deaths, an indeterminate number of missing persons and 540 wounded, some seriously. Altogether, throughout Bolivia, since Jeanine Añez usurped executive power, 870 people have been injured, according to the Ombudsman’s Office. They are there to be seen by the IACHR delegation, which will arrive in Senkata in the afternoon.

Milton David Centeno, his remains are inside a white coffin covered with flowers. Only his mother guarded the coffin on Sunday morning, she is small by herself in a corner, with her skirt unfolded on a chair and a black shawl covering the wool hat that shelters her. She looks straight into my eyes when I speak to her, she doesn’t cry, at least she won’t cry as long as the rage animates her. “There was only one son, another daughter; she wanted him to go to university,” says Claudina Geronda Huanca. “They took a bronze bullet out of his head, he was going to be a professional”, and in the repetition of that future that will never be, tears appear.

From the adjoining room, the smells of the kitchen mingled with the chrysanthemums, the red onion, boiling corn, cilantro, rice. For those who come to say goodbye to this boy who was in his third year of Law, the first university student of his family, the first among his ancestors who go back for centuries in these lands, there will be food. This is the tradition and it will be fulfilled when the room is filled with black hats, flowery pins, the galas that cholas and cholos offer to the dead. On open aguayos, on the floor, there is also food as an offering to share: corn inflated in one and Aptapi -quesillo- with tunta -those potatoes that are frozen, buried and then cooked- in the other.

From the street, the voices of the “cabildo” are heard, where the blockade was approved early, among some three hundred people, especially so that the traces of the bullets of the concrete defenses that divide the highway are not erased, so that the Banco de Comercio does not repaint the walls where the blood spilt by David Posto Cuzzi had gone on November 19 to renegotiate two debts he had in that bank together with his companion, Wendy Colqui. Or that of Calixto Guanaco Aguilar, who is still hospitalized but has been declared brain dead from a bullet that was embedded in his head when he tried to help someone else. Traces of those stories that during the afternoon, were going to hurt again when they were told before the Inter-American Commission on Human Rights, cannot be erased. And for that reason the process for the president of the commission, Pablo Abrao, was not easy either.

The decision made by the Commission to move to El Alto was like picking up the gauntlet of the provocation suffered by those who had gone to testify on Saturday at a hotel in southern La Paz, a 5-star hotel surrounded by demonstrators from the Civic Committees who insulted human rights organizations – such as the Permanent Assembly for Human Rights and the Association of Families of Detainees and Detainees Disappeared in Latin America, among others – and relatives and people injured in the Senkata massacre. “We are so tired, I am one of the youngest and I am over 70; I never imagined I would see another coup”, says Ruth Llanos, from Asofam and she lets herself be embraced by David Inca, from the Apdh that will confront Pablo Abrao with testimonies that speak of torture, the implantation of evidence and even the defamation of people killed as “drunkards or terrorists”. “Añez bathed herself in the blood of the poor,” says the Apdh spokesman, and concludes: “Worse than animals, this is how they treat us”.

Neither the images of Saturday in front of the hotel Casagrande, nor those of the half a thousand people who gathered in the chapel of St. Francis of Assisi to provide testimonies and evidence appeared on television. In the handwritten posters that the people erected, “international press” was requested; indeed, the urgent need to stop being invisible was sought. On Bolivian television, on the other hand, one could see the march that, at the same time, was led by followers of Waldo Albarracín, rector of the University of San Andrés, who through social networks called for a march to prevent the military from leaving the streets and for there to be no law of guarantees.

How can we prevent the arrival of the IACHR in Argentina from returning to the body when radio stations were instigating the mistreatment of those who wanted to denounce human rights violations by State Terrorism in 1979? How can we not think, every time there is talk of shootings from helicopters -because the story is desperate and there is vehement insistence- of the Napalpi massacre, when 200 indigenous people were murdered in the Argentine Chaco, shot from planes in the middle of the last century?

What is happening in Bolivia, in parts of Bolivia that are being made invisible, is not just from now, they are old wounds that continue to ooze. “We are 80 percent of the population, who has to govern? We must. We have to demand that Spain take the remains it left us,” shouted Henry Contreras Roca, and he stirred up not just anger but a hatred that the bullets, which can still be seen in that desert territory scarred by rubble, only heightens.

“Añez came to kill us: a bullet shattered my husband’s heart,” said María Cristina Quispe, companion of Juan José Tenorio Mamani, 23, locksmith. “It entered his back when he was carrying a wounded man,” she sat down in front of Abrao, under the altar of the chapel and began to cry. Her head covered in black, her firm demands: that Áñez leave, that government minister Arturo Trujillo leave, that there be “International Justice because there won’t be any here. Pablo Quispe Mamani, 24; Antonio Rolan Quispe Ticona, had 25, three minutes before dying from a gunshot wound he was having lunch with his mother. Cristian Condori, 23; Clemente Mamani Santander, 23; Edwin Jamachi Paniagua, 20. Each one had their minute of collective mourning in the memory of those who named them and related what they knew of their deaths. All wounded by bullets.

And yet, it was not enough. When it was Betina Gutierrez’s turn, silence grew like a tide looking for the moon. “I am a living dead, I am the witness who survived. I was there in the blockade, there were not even 50 of us. I stayed when I saw the tanks coming because I thought they were going to talk to us. But no, they started shooting, without a warning. I saw half of them wounded and we fought to prevent the bodies from being taken inside Senkata station. I saw a girl with a gunshot to the face, I don’t know where that girl is. I saw a lady in a skirt who was wounded and I wanted to drag her but I couldn’t because she was heavy. They took her out of my hands and put her inside.

And I grabbed a bunch of shells so they couldn’t lie. And here I have them,” she said and put them on the aguayo that covered the wooden tables where the members of the IACHR took notes. Betina has an autistic child, she asked for protection for him and for herself, not from the police. Pablo Abrao was informed of the extreme vulnerability of this woman in these moments of persecution like the one described throughout the session.

The news on television speaks of the lifting of the blockades throughout Bolivian territory. In Senkata this is disproved. In the center of La Paz, Albarracín followers denounce the lifting of the MAS blockades as a strategy to strengthen themselves. The fourth interval for further discussion of the law of guarantees ends today. Meanwhile, television speaks of peace and usurps the voice of the Chilean people who have taken Victor Jara’s words to defend the dignified life they demand.

Bolivia: Heartbreaking testimonies of victims before the IACHR in El Alto – Massacre in Senkata Sacaba