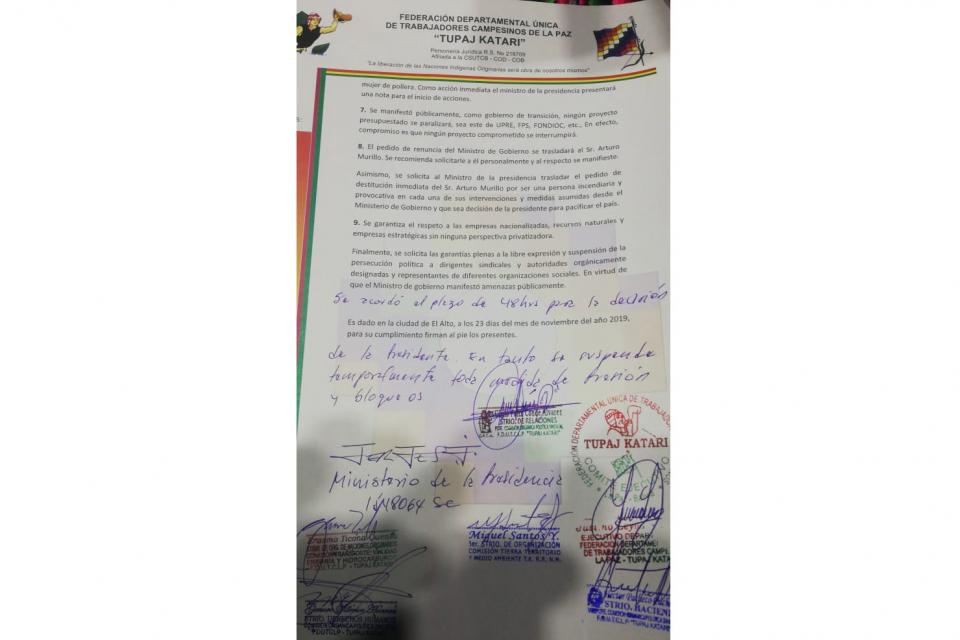 Yesterday, the Minister of the Presidency of the Bolivian coup regime accepted eight of the nine demands presented by the peasant and social organizations of La Paz. The agreement, signed by Minister Jerjes Justiniano, removes the military from the streets of the country, frees those arrested in the protests, promises economic reparations to the victims of the repression and the continuity of certain policies of the government of Evo Morales. The pact was signed by Minister Justiniano on stationery of the organization Tupaj Katari (see facsimile), which is the Departmental Federation of Peasant Workers of La Paz, along with representatives of social organizations.

The points of the pact are:

* Abrogation of the decrees that exempt the Armed Forces from criminal responsibility in the repression.

* Immediate withdrawal of the military.

* Release of those detained in law enforcement operations, guarantees to union leaders and no persecution.

* Economic compensation and medical care for the wounded and compensation for the families of the victims of police and military repression.

* Respect for the Whiphala (the indigenous flag) and prosecution of the policemen who mistreated the patriotic symbol.

* Continuity of the projects of Evo Cumple and others of the previous government.

* Removal of Arturo Murillo from the post of Minister of Government.

* Respect for natural resources and not dispossession.

Meanwhile, de facto president Jeanine Añez opposed a bill presented by MAS to give immunity to former constitutional president Evo Morales. Añez publicly announced that, if approved, she would veto the bill. “We cannot grant protection to those who have subjected, persecuted, deceived and mocked Bolivians,” said Áñez.